Highlights from our humanitarian action in 2018

In 2018, internal armed conflicts affected many communities in the Philippines. Particularly in Mindanao, clashes caused displacement and lack of access to necessities. Many people who returned to Marawi or remained displaced due to heavy fighting that struck the city in 2017, continued to depend on humanitarian interventions.

Throughout the year, the ICRC acted to address urgent or specific needs of the people displaced, wounded, separated and detained due to the conflict. Acting alone or in cooperation with the Philippine Red Cross (PRC), the ICRC focused its multidisciplinary response on pressing concerns of the affected people, such as access to health services, water and food. It also helped people restore family links broken through displacement, detention or disappearance. Where feasible, families in conflict-affected communities received support to recover from the effects of conflict and build their resilience. The ICRC also provided advice and support to the authorities towards addressing systemic issues in detention, such as congestion.

As a neutral and impartial organization, the ICRC maintained dialogue with parties to the conflict – state and non-state - to remind them of their obligation to spare civilians and respect humanitarian rules. These rules, known as international humanitarian law (IHL), have also been discussed with executive, legislative and judicial branches of the government, but also with academia, religious circles and civil society.

See the highlights of our diverse work to assist and protect people affected by the internal armed conflicts in the Philippines. 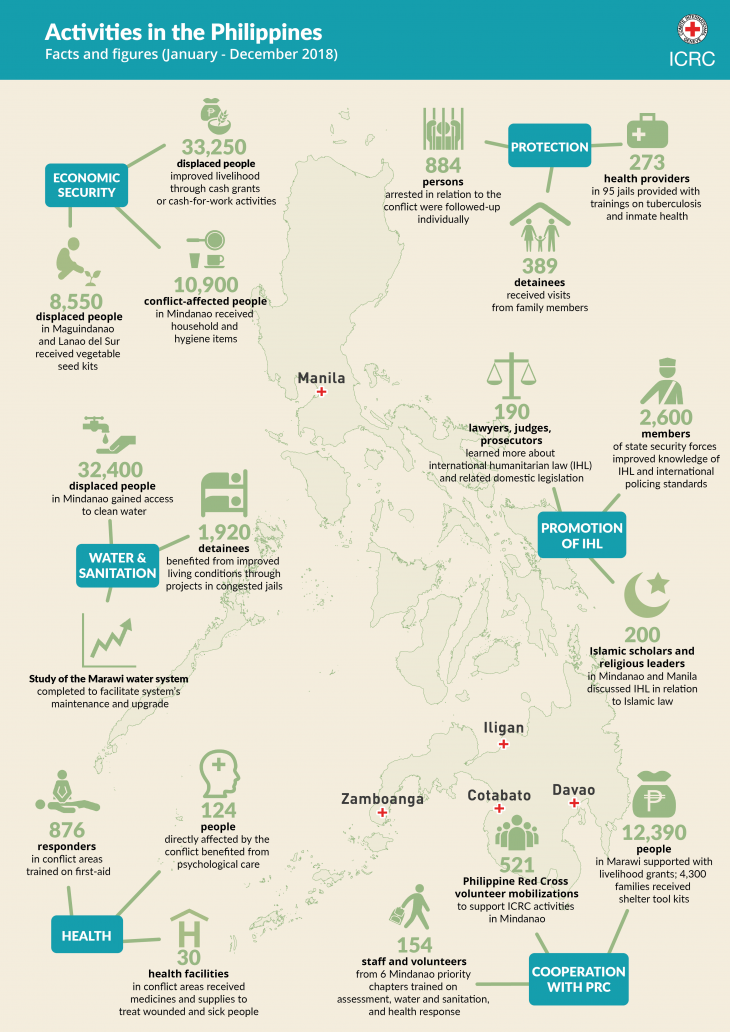 Facts and figures of ICRC activities in the Philippines in 2018