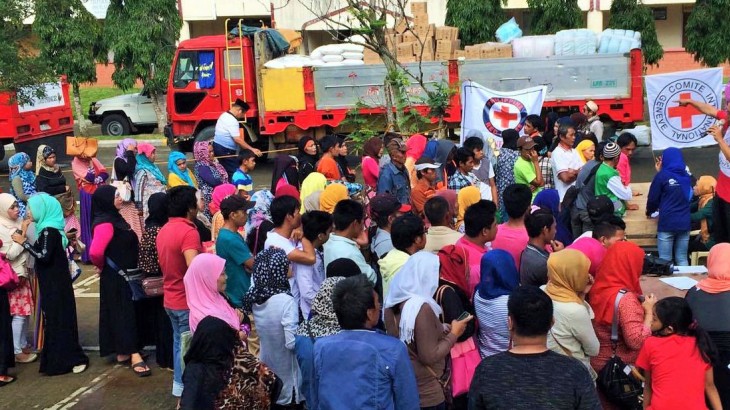 The combined efforts of the ICRC, the PRC Marawi Chapter, the local government unit, and other nongovernment organizations made possible the distribution of emergency food rations, essential household items, and hygiene kits to more than 2,300 conflict-affected families, most of them displaced since February from six barangays in Lanao del Sur. CC BY-NC-ND / ICRC / A.G. Marohom

Manila (ICRC) – The International Committee of the Red Cross (ICRC) expresses its concern for thousands of people from Butig, Lanao del Sur, who remain displaced following clashes between government forces and an armed group in late May to early June.

"Now many of the displaced are living with relatives and depend heavily on their kin and the authorities, as they are still too afraid to go back home. Civilian houses were also destroyed in the fighting. We ask all sides in the conflict to exercise utmost precaution to protect civilians and their property," he added.

Between June 8 and July 2, the ICRC, together with the Philippine Red Cross (PRC), provided food and household items to around 12,500 people displaced from Butig. The distributions took place in Butig and neighboring Lumbayanague municipalities as well as in Marawi City. The ICRC-PRC assistance augmented the aid provided by the government and helped families meet their basic needs.

Prior to its relief operation in Butig, the ICRC conducted its own assessments and coordinated closely with community leaders, the Department of Social Welfare and Development, and nongovernment organizations.

The ICRC is a neutral, impartial, and independent humanitarian organization whose mandate is to protect and assist people affected by armed conflict and other situations of violence. It has had an established presence in the Philippines for more than 70 years and a permanent presence in Mindanao since 1982.