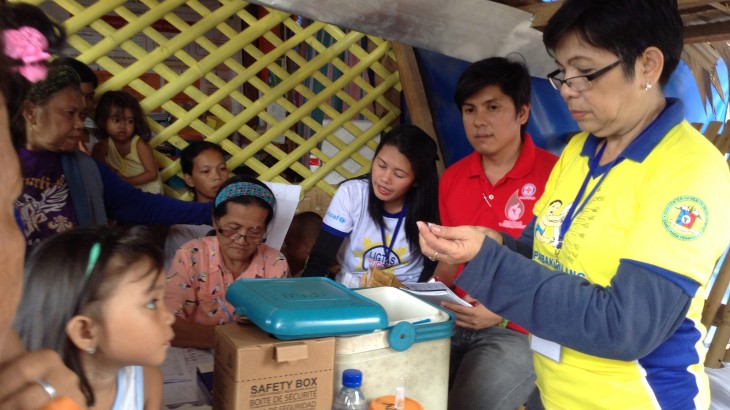 Displaced children, along with their parents, register and queue for immunization at the stadium, which continues to host more than 10,000 evacuees, as the Philippine Red Cross and City Health Office teams prepare the vaccines. © ICRC/Maricel Lutian

Manila (ICRC) – Thousands of young children from displaced families in Zamboanga City will be immunized against measles, rubella and polio from September to October, with the aid of the International Committee of the Red Cross (ICRC).

The ICRC, together with the Philippine Red Cross, has been supporting the primary health-care activities of the Zamboanga City Health Office, including the mass immunization of children aged 0-5 years, under the nationwide campaign to protect an estimated 11 million children from measles and rubella, as well as polio.

“Through this support, children of displaced families will be fully covered by the campaign,” said Beatriz Karottki, the ICRC’s health coordinator in the Philippines. “This support is part of our continued assistance to displaced persons in Zamboanga, which includes improving the health of vulnerable groups like infants and young children.”

September was declared national immunization month by the Department of Health. A nationwide vaccination campaign called “Ligtas sa Tigdas at Polio” (Safe Against Measles and Polio) has been launched to reduce and eventually eliminate cases of measles and rubella, and to maintain the country’s polio-free status, achieved in 2000.

The ICRC has been providing assistance to thousands of people displaced in Zamboanga City since the onset of the crisis in September 2013, together with the National Society. It continues to improve access to clean water and sanitation at several temporary sites, and to enhance the health and nutrition of thousands of people who remain displaced.