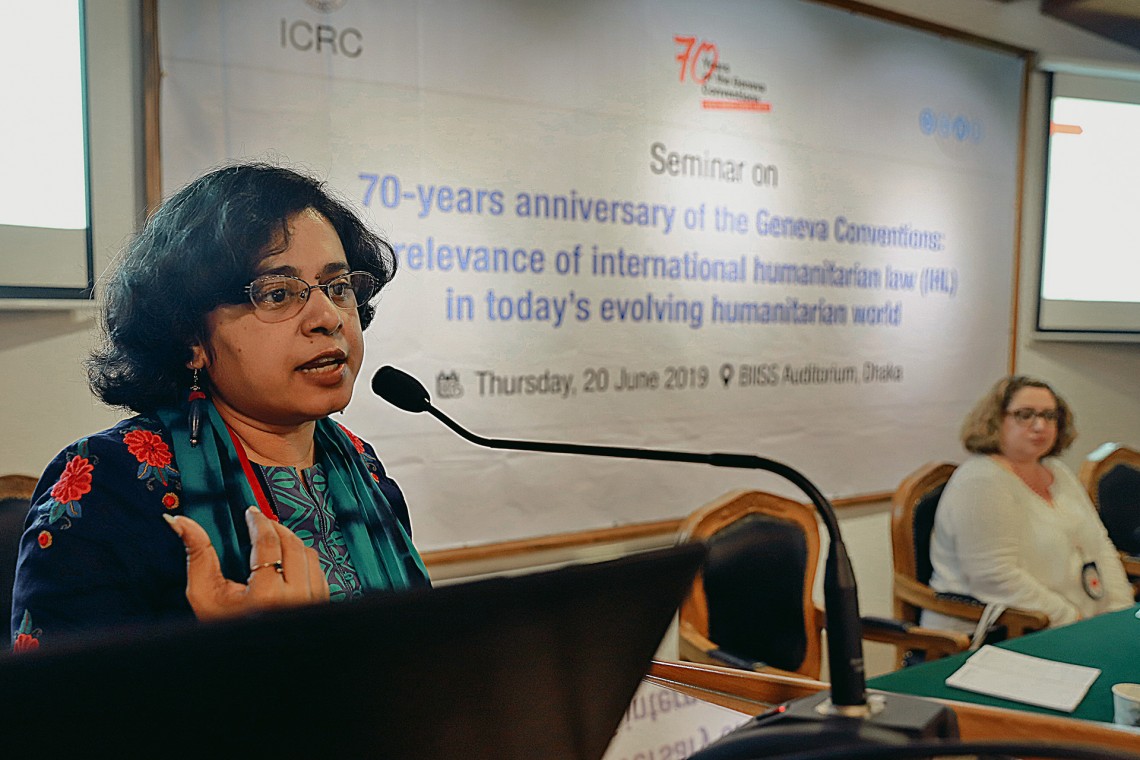 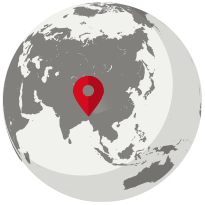 On 20 June 2019, Academicians, journalists, and humanitarian professionals came together in Dhaka to discuss the challenges and relevance of international humanitarian law (IHL) and customary law amid increasing humanitarian crises around the world, including the Rakhine crisis. This daylong seminar has helped shape the debate and discussions around the Geneva Conventions which celebrate their 70th anniversary on the 12th of August this year.

The Geneva Conventions and their Additional Protocols are international treaties that contain the most important rules limiting the barbarity of war. They protect people who do not take part in the fighting (civilians, medics, aid workers) and those who can no longer fight (wounded, sick and shipwrecked troops, prisoners of war). 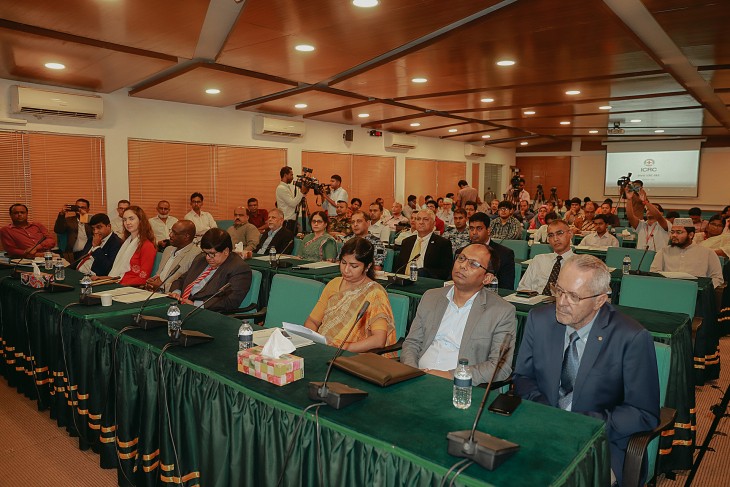 Questions and comments from the audience - including students from law and international relations faculties, and representatives of national and international humanitarian organizations – enriched the debate. The event was jointly organized by the Diplomatic Correspondents Association, Bangladesh (DCAB) and the ICRC in Dhaka.

The four Geneva Conventions are among the very few international treaties that have been universally ratified, not least because they reflect more than just law - universal values of ethical behavior and have existed to protect people for seven decades. However, contemporary challenges to the Geneva Conventions respect and implementation are at the core of the ICRC's preoccupations as the guardian of IHL, and other stakeholders worldwide, including DCAB, as illustrated by the discussions.

The speakers in the seminar have agreed upon the unremitting questions on the relevance of IHL in today's world, with civilians bearing the brunt of many protracted conflicts. But, the rules of IHL remain as relevant as ever as their effect can be seen every day: when a wounded person is allowed through a checkpoint, when a child receives food and other humanitarian aid, when the living conditions of detainees are improved or when they can have contact with their families. When IHL is respected, harm to civilians is drastically reduced.

Ikhtiyar Aslanov, head of the ICRC delegation in Bangladesh, said: “For me, it is not about anniversaries or debates on legal phrasing; it is about protecting people from the worst of the wars which rage today. It is about the laws that assert that as long as conflict remains a reality, there also must be a limit to suffering. And this is the message the ICRC has been carrying forward, including in Bangladesh since 1971.” A.Hossain/ ICRC

"The relationship between journalists and humanitarian agencies is important to jointly help promote the voice of the voiceless. Such collaborative efforts and deliberations, especially on IHL and its relevance, certainly can lead to a better understanding of humanitarian emergencies and crises to help ensure greater respect of IHL within the changing dynamics of conflict," said Mr Raheed Ejaz, president of DCAB. A.Hossain/ ICRC

The event was inaugurated by His Excellency, Dr. A. K. Abdul Momen, M.P. Hon’ble Minister of the Ministry of Foreign Affairs, who underscored the importance of Geneva Conventions and their role: “Violations of IHL persist, causing devastating and unacceptable humanitarian consequences in many places. Constant efforts are needed to ensure that IHL is respected and that States take their responsibilities in ensuring respect of IHL in today’s complex armed conflicts.” A.Hossain/ ICRC

In one of the two sessions, Professor of law at Dhaka University Mohammad Nazmuzzaman Bhuian spoke on the relevance of International Humanitarian Law (IHL) in today’s world. He commented on: “the changing nature of armed conflict and that civilians continue to bear the brunt of conflicts. It may be tempting to indicate that IHL is no longer relevant. It has grown stronger, not weaker over the past years, where examples included Civilian Casualty Tracking Cell (CCTC) and the 2006 act in which Nepal banned th A.Hossain/ ICRC

Taking part in the discussion, Professor of law at Chittagong University ABM Abu Noman spoke about “Customary Law: a contribution to improve the protection of civilians during armed conflicts”. He reflected: “Development of Customary Law plays a significant role in expanding the reach of IHL to avoid and prevent suffering. CL derives from the practice of states and must be widespread to be the rule of law i.e. in military manuals, national legislation etc.” A.Hossain/ ICRC

Professor of International Relations of the University of Dhaka Ms Lailufar Yasmin highlighted the challenges between the host communities and displaced people from Rakhine in the context of today’s protracted crisis. A.Hossain/ ICRC

On the sidelines of the event, a photo exhibition was on display also to mark the occasion. A.Hossain/ ICRC