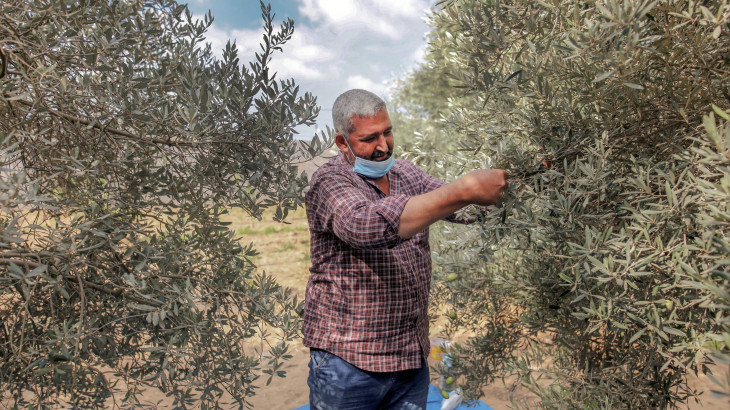 For Palestinians, the olive harvest is not only an agricultural season but rather a tradition that their ancestors have kept for decades. During the olive harvest season, Palestinian families gather in the groves and pick olives together. It's also part of the tradition to sing folk songs and share a meal or two together. The families leave their homes at sunrise to finish the harvest before temperatures get too high. They start the day by making a small fire to brew tea. And, of course, a breakfast consisting of ripe olives and taboon bread is a must!

Palestinian farmers face many challenges during and in the period around the harvest season, starting from the consequences of prolonged conflict and ending with climate change phenomena. Ramadan Ishtewi (Abu Ibrahim), 46, followed in his father and grandfather's footsteps and became a farmer at an early age. Every year, he anxiously waits for the olive harvest season, as it is the main source of income for him and his family. The profit Abu Ibrahim makes from selling olives, olive oil, and olive-oil products, like pickles, constitutes 80% of his overall income.

Abu Ibrahim, like many other farmers in Gaza, has suffered from a massive drop in the productivity of olive trees in 2021, and much of that loss is caused by environmental degradation and climate change. "I own 120 olive trees, which would usually produce 12 tons of olives. This year, however, they produced one ton only!" says Abu Ibrahim. He adds, "The extreme temperatures and uneven distribution of rainfall have seriously impacted the flowering phase and tree-load. We've never witnessed such a decrease in tree-load over the past ten years".

According to the Ministry of Agriculture, the olive production in Gaza is witnessing a drop reaching up to 65% compared to previous years. This great fall is mainly caused by the consequences of climate change, with an intensity that the Gaza Strip hasn't witnessed in the last ten years. The last winter season witnessed surprisingly high temperatures reaching up to 27 °C, followed by abnormally low temperatures during the moderate-temperature months of the year. This has impacted the flowering and production phases. Furthermore, high temperatures and humidity cause agricultural pests, such as the 'olive knot disease', which reduces a tree's productivity by 80%.

The usual annual production of olives in Gaza is 30,000 tons. This year, it has dropped to 9,000 tons, and a one-dunum olive grove that would usually produce 1,000 kilos of olives has produced only 300 kilos instead this year. This continues to be a serious issue for Palestinian families living in the Gaza Strip, as many depend on olives and olive oil as a main or secondary source of income.