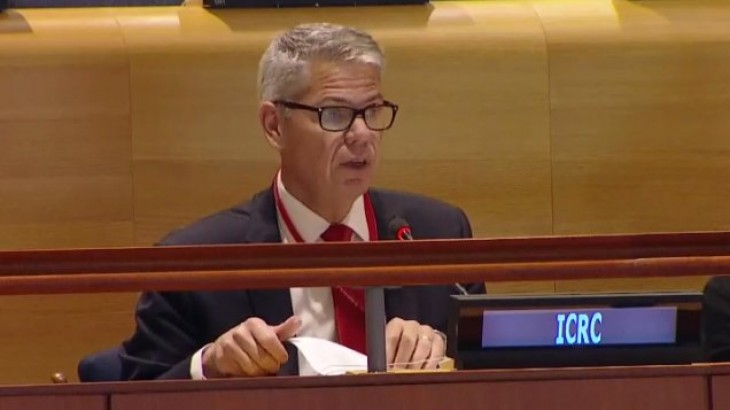 Terrorism negates the fundamental principle of humanity. It is contrary to many underlying principles and core objectives of international humanitarian law (IHL). The ICRC condemns acts of terrorism and is deeply distressed by the devastating impact of these acts on communities and individuals.

States and international organizations have reacted by developing a comprehensive and multi-layered counter-terrorism framework.

The ICRC does not challenge the legitimacy of States to take the measures necessary to ensure their security and eliminate terrorism. Nevertheless, Member States must be clear and firm about the need for counter-terrorism activities to be conducted with full respect for the protections afforded to all individuals by international law, in particular IHL and human rights law.

Importantly, these bodies of international law must be respected when individuals are arrested and detained in connection with terrorism. Their designation as so-called "foreign terrorist fighters," or the nature of the acts they may have committed, may in no way be invoked as a justification for the non-observance of the legal protections they are entitled to under international law, notably IHL, when applicable. Independent and neutral monitoring mechanisms, such as the International Committee of the Red Cross, should be granted access to these individuals, so that they can assist detaining authorities in ensuring that detainees are treated humanely and in conformity with applicable international law and standards.

In relation to the counter-terrorism measures taken against "foreign fighters" and their families, the ICRC is particularly concerned by the situation of children. Children affected by such measures, even those accused of crimes, are first and foremost victims. In this regard, the General Assembly has called upon Member States to ensure that children associated or allegedly associated with armed groups should be treated primarily as victims, as it did in the 2018 Resolution on the Rights of the Child. Children must be detained only as a last resort and they must be treated with due consideration for their age and individual vulnerabilities. The ICRC encourages States to find solutions that are in the best interest of these children, notably by ensuring that they are not separated from their parents and siblings, and by giving due consideration to their repatriation, when in the best interest of these children.

On various occasions since 2011, the ICRC has underscored the potential adverse effects on humanitarian action of certain counter-terrorism measures taken by States, both internationally and domestically.

Humanitarian activities undertaken by impartial humanitarian organizations, including those in favor of wounded and sick fighters, must never be considered as a form of unlawful support to non-State actors or individuals designated as terrorists or criminalized under international, regional or domestic laws. The ICRC recalls that such activities are an integral part of the humanitarian mandate assigned to impartial humanitarian organizations by the State parties to the Geneva Conventions of 1949 and their 1977 Additional Protocols.

In the ICRC's view, sanctions regimes and criminal laws dealing with terrorism should exclude from their scope of application activities that are exclusively humanitarian and impartial. Such exclusions – also known as "humanitarian exemptions" – and other mitigating measures, would be in line with the letter and spirit of IHL and therefore compatible with States' obligations under that body of law. Failure to exclude these activities from criminal laws dealing with terrorism would lead to the negation of the notion of neutral, independent and impartial humanitarian action and jeopardize the mission of impartial humanitarian organizations to protect and assist people affected by armed conflict, particularly in areas where non-State armed groups designated as terrorist are active. These are areas in which the needs of the population are often more acute.

In this regard, the ICRC welcomes the recent inclusion of paragraphs regarding humanitarian activities in counter-terrorism Security Council Resolutions 2462 and 2482. These paragraphs urge all States to "take into account" the potential effect of counter-terrorism measures on "exclusively humanitarian activities" carried out by "impartial humanitarian actors" in a manner consistent with IHL. We further welcome the readiness of the Counter-Terrorism Executive Directorate (CTED) and others to explore and report upon this issue in 2020.

Mr. Chair, thank you very much.