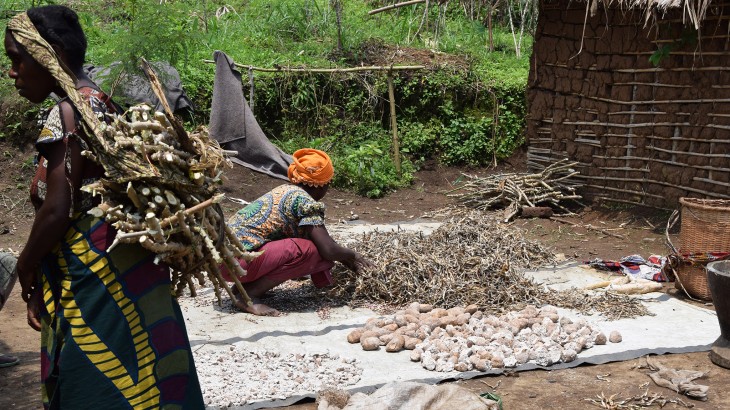 Kinyumba, Masisi, North Kivu. Esther arrives home with her bundle of cassava cuttings. Her neighbour, who had received her bundle earlier in the day, lays the cassava cuttings out in the sun to dry them. CC BY-NC-ND/ICRC/Christian Katsuva

Recurring armed conflict in the Democratic Republic of the Congo is leaving thousands of people destitute by depriving them of many of the resources necessary for survival. By means of agricultural projects, the ICRC is helping them to recover the ability to provide for themselves and, ultimately, to regain their financial independence.

"We're giving victims of war or other violence a chance to produce food, in particular by providing them with the seed and tools they need, and to use part of the harvest as a cash crop so that they can generate an income large enough to meet expenses," said Christian Bosson, who coordinates the ICRC's economic security activities in the country.

In January, rural communities in North Kivu province will be about to receive the first results of the sowing that took place in September, when the rains and the growing season began. This harvest will mainly consist of maize, beans, peanuts and other vegetables for which the ICRC provided seed. Cassava cuttings were distributed at the same time as the seed, but the harvest will take place at the end of 2015.

"We fled our village because of the fighting," said Faida, the mother of three children. "We used to live off the land, but the war forced us to abandon what we had sown. In addition, our cassava did not produce enough because it had the mosaic virus disease. But I'm impressed by what I've just seen in this field. If these stems produce the same quantity and quality in our fields, then we'll be able to harvest enough to send our kids to school again." Faida is one of the people who have returned to the Bapfuna and Bashali-Mokoto groups in Masisi, to which the ICRC redistributed a part of the production of local associations that received support as part of a North Kivu agricultural project. She was given 50 one-metre cuttings of improved-quality cassava stems. 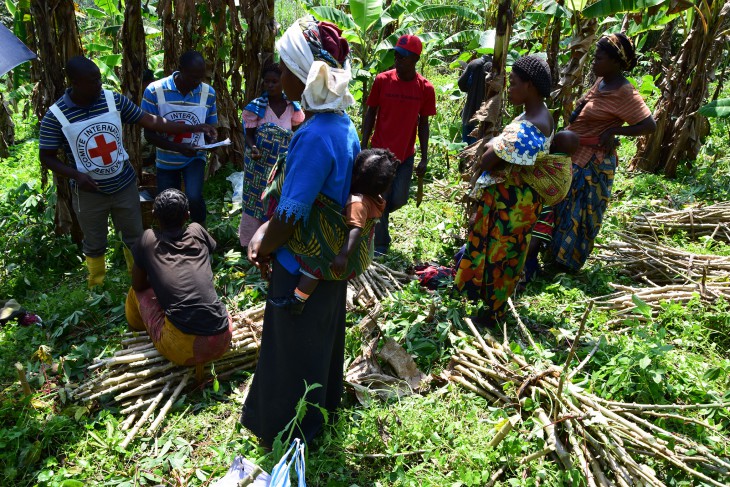 Women register their names with the ICRC team after having received their cassava cuttings. CC BY-NC-ND/ICRC/Christian Katsuva

Like Faida, many others in North Kivu are regaining hope. Because the two varieties of cassava that were distributed are resistant to cassava mosaic virus disease, they can produce more tubers – sometimes as many as four kilograms per stem, which is enough to feed four people for three days. For families living mainly from farming who have just returned to their villages after months or even years of displacement, the cuttings represent an opportunity to relaunch farming activities and make a fresh start.

In order to make things more efficient, the ICRC provides training in farming practices that will optimize timing and productivity. It also follows up in two different ways: shortly after the seed distribution it checks on how the seed has been used, and at harvest time it looks at the production volume and its impact on households in terms of the amount of food produced and income generated. 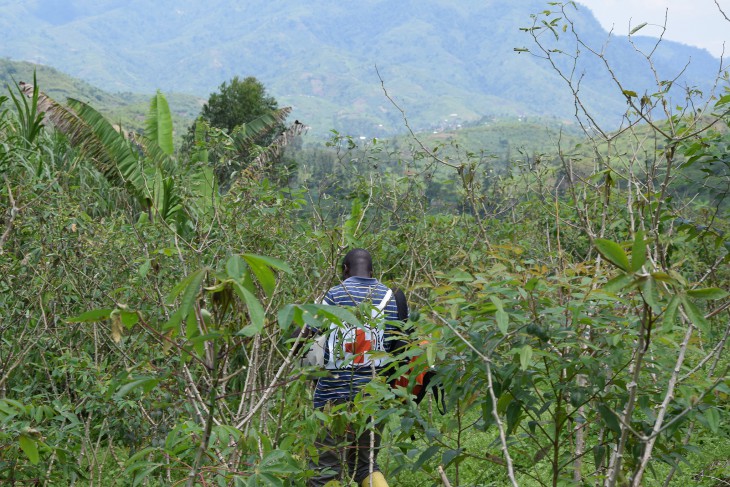 An ICRC agricultural field officer verifies that the techniques shown to local associations for the care and maintenance of the cassava plants are being followed. CC BY-NC-ND/ICRC/Christian Katsuva

In most cases, food (beans, maize, rice, cooking oil, salt, etc.) is distributed alongside seed. "This is to ensure that the seed is not eaten, as the people receiving the aid are very often in a difficult food situation," said Mr Bosson. "By giving them food, we want to make sure that they will really use the seed to grow crops and that they will have enough to eat until the next harvest."

To be successful, agricultural projects have to be able to rely on a certain measure of stability – something that is hard to guarantee in the eastern Democratic Republic of the Congo, which has been shaken by conflicts for many years. Esther, met in Kinyumba, North Kivu, remains concerned: "We have done our planting, but we don't know whether we'll be able to enjoy the fruit of our land. In recent years we've been displaced several times and our fields have been plundered. We're hoping that this respite, which has lasted longer than the others, is going to turn into a lasting peace that will enable us to freely go about our daily lives."

Time and again, the ICRC has had to suspend or cancel seed distributions because of recurring security concerns in some parts of the country.

In 2014, in connection with support for the restoration of agricultural output, the ICRC provided 215,530 people with maize, bean, peanut and other vegetable seeds, cassava cuttings resistant to mosaic virus disease, and farming tools. To improve their cropping systems and increase production, the ICRC also provided the aid recipients with training in farming practices and techniques for managing fish-breeding ponds.