Diary: Bearing witness to the crisis in Syria 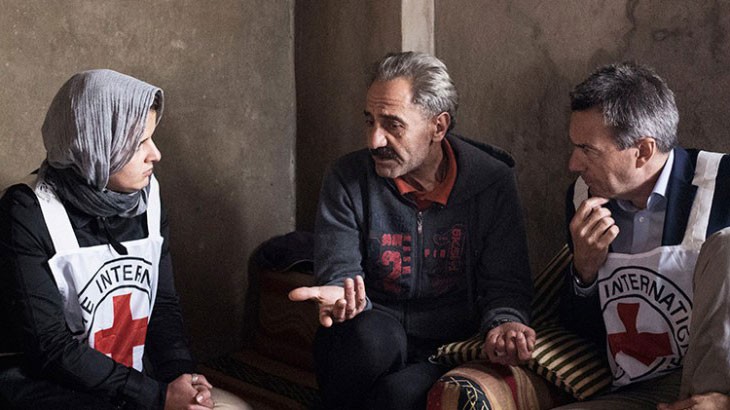 President of the ICRC, Peter Maurer, and head of operations in Homs, Majda Flihi, visit with Khaled, a resident at a shelter for internally displaced persons in the zone of Al Waer, Syria. Magnum for ICRC/J. Sessini

In late February 2016, our president Peter Maurer was in Syria. Each day he reflected on what he saw on the ground.

Monday: "I arrived in Damascus today"

It's my fourth visit since the beginning of the war in Syria. Since I became president of the ICRC in 2012. I have travelled to war zones all over the world. To Somalia, to Gaza, to Iraq, to Afghanistan, to Yemen, and many others. Syria, a country I had visited as a tourist long before the war started, is a tragic example of what war can do to a country, to a society.

On my first trip with the ICRC to Syria, I visited some villages that were freshly destroyed, where homes had been bombarded, where people had had to flee and leave everything behind. Years later, the war has not ended. People are still displaced, some people are completely cut off from the world, living in besieged areas. The most basic things – food, water, shelter, health care – nothing can be taken for granted anymore.

This is why the ICRC works in Syria: to bring aid and protection to people, in every way and in every place we can.

I will spend a week in Syria, meeting authorities, accompanying my staff when they distribute aid to people, and traveling to places to meet and listen to the people who are suffering.

As a neutral, independent and impartial humanitarian organization we do everything we can to bring relief, and to give hope.

As humans, we are also here to bear witness.

Tuesday: "My second day in Syria was filled with stories."

The story of Mahmoud, a 13-year-old boy hooked up to a dialysis machine. He was grinning when I shook his hand. The story of Loujain, a five-year-old girl, displaced from Deir ez-Zor. She needs surgery to treat her kidney disease, but her family can't afford to pay for it. The story of an old Somali woman, who came to Syria to get treatment for diabetes and escape one war, only to get caught up, years later, in another.

Eleven thousand volunteers from the Syrian Arab Red Crescent work all across the country. I met some of them today, in an impressive health centre on the outskirts of Damascus. A few of them I have known since 2012, when the war was just starting. Back then they too were just starting out, working to treat the sick and wounded that every war creates. The man I met in a basement in 2012, helping patients in a makeshift first aid room has now become the manager of a fully operational disaster response team. War creates professionals, and in the case of my SARC colleagues, they are the very best kind of professionals.

These men and women are skilled, motivated, and extraordinarily dedicated in their quest to help everyone who is suffering. They also have stories to tell. Since the beginning of the war, 53 SARC volunteers have been killed while trying to save others.

We remember them, and their stories, too.

Wednesday: "A long day in Damascus is about to end."

I had marathon meetings with all the authorities that have a link to our operations in Syria. The ICRC is ready and willing to increase its aid deliveries, across the country. But to do so involves huge amounts of planning and preparation. Foreseeing import times of food parcels, obtaining security guarantees for dangerous areas, establishing what kind of surgical material can be brought to which town, and when – behind every aid delivery there are weeks and months of planning.

In those plans, we have to foresee that the situation can change every day. New access to besieged places like recently in Madaya, Moadamiyeh, Foua and Kefraya, or new mass displacements like in Aleppo mean we have to adjust our planning, and deliver quickly.

Because people need food and cooking utensils, they need blankets and shelter, they need health care and medicines. The sad truth though is, that in the last five years in Syria, while our operations have steadily increased, humanitarian needs have increased much faster. We want and have to narrow that gap, so we keep negotiating and we keep planning.

My favourite part of today was a gathering with the ICRC staff based in Damascus. From the driver to the head of the delegation, these are people who work incredibly hard and put themselves at risk, to help the people suffering in Syria. I'm grateful for all they do.

Tomorrow I'm headed to Homs, to see our operations in and around the town. I wonder what the people of Homs will tell us – about their lives and their hopes. They have to come first, always.

Thursday: "Sleep is a scarce luxury in the humanitarian world."

What keeps me up at night changes, but tonight it will be Khaled's story.

Khaled sold vegetables before the war in Syria started. He and his wife had eight children and a full life. Today, Khaled is a broken man. It started when his son went to get bread, and was killed by mortars. Khaled and his family fled the fighting, four times, leaving everything behind each time. Then his wife died while giving birth. Today, Khaled lives with six of his children in a shelter in Al Waer, an area on the outskirts of Homs that is under siege. There is no work, no formal school, and whether or not food and goods can enter Al Waer is unpredictable. Khaled told me that all he wants is for his children to be able to play. But he worries, that if the war goes on any longer, he will lose all of his children.

I visited Khaled's hometown, Homs city, today. The city centre is a surreal scene of mass destruction. There is hardly a building that wasn't destroyed, a painful reminder of the cruelty of urban warfare, where civilians are the first victims. There are no people there anymore, adding to the impression of a ghost town. In the old town of Homs, there was destruction, too, but people are slowly returning, and even a few small shops have opened, selling washing powder in individual packets and small quantities of vegetable oil.

I hope that Khaled will be able to return to Homs city, and watch his children play, in peace.

My fourth visit in four years confirmed the sad constant of suffering. Every time I come, I see more destruction, and more people in need.

This conflict is one that combines all factors of modern warfare: many different parties, all types of weapons, cruel urban warfare, and deliberate attacks on civilians and the infrastructure people need to live: hospitals, schools, water systems, power plants.

A few hours from now, a ceasefire is supposed to start. All day today, you could hear planes and explosions, some shelling, some gunfire. I hope, like everyone, that this ceasefire will hold, and that it will be one of many steps taken towards peace and reconstruction in Syria. What we know from our work on the ground, from operations like the ones I visited this week, is that the needs are immense. Immediate needs like food, shelter and water, but also long-term needs like finding out what happened to your missing loved ones.

What we know at the ICRC, is that whether or not the ceasefire holds, whether or not a peace agreement is found, people need help, and they need it now. So my colleagues in Syria will continue to do everything they can to bring aid, to people on all sides of the war. I'm proud of what they do in the name of ICRC.

The war in Syria has destroyed many lives, and many places. The people I met this week showed me that it has not destroyed humanity. I don't think it will.