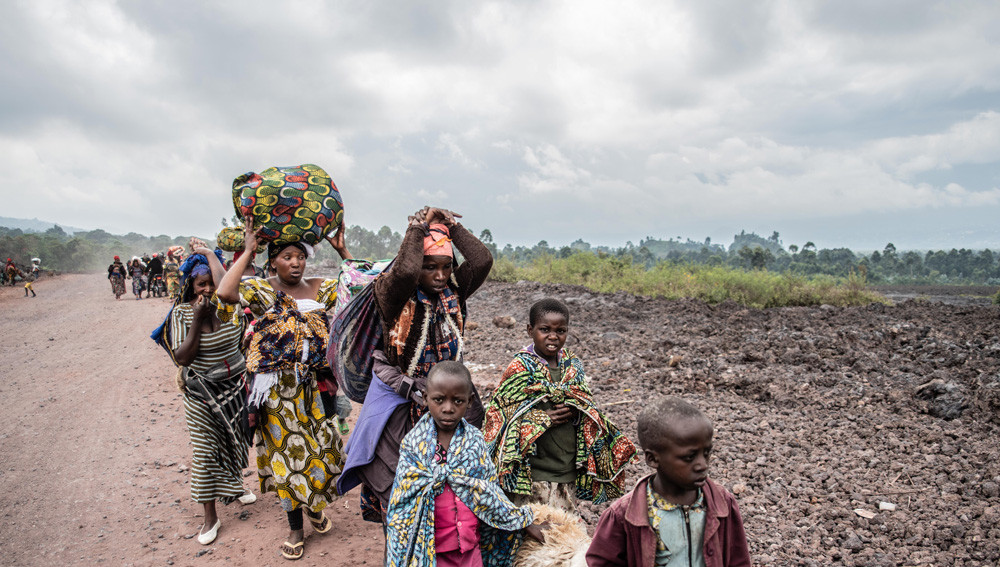 In eastern Democratic Republic of the Congo (DRC), the surge in violence has driven thousands of displaced people to the outskirts of Goma

The intense, ongoing clashes in Rutshuru Territory between the Armed Forces of the Democratic Republic of the Congo and M23 fighters have caused more than 72,000 people [1] to flee their homes in the space of one week. The International Committee of the Red Cross (ICRC) calls on all combatants to protect civilians and allow humanitarian workers to provide people with the help they need.
News release 01 June 2022 Democratic Republic of the Congo

Over the past few days, fighting has taken place near several villages, including Katale and Buvunga to the north-west of Rumangabo, and created panic among local residents. “On the road between Rutshuru and Goma, thousands of people can be seen fleeing on foot or by motorcycle. Some villagers have fled together with their livestock, which in many cases are their only means of subsistence,” said Raphaël Ténaud, the head of the ICRC’s subdelegation in Goma.

As a result of clashes near a site used to distribute food in Rugari, the ICRC was forced to suspend its food distribution in that area on 24 May 2022. “We are calling on all combatants to do everything they can to avoid harming civilians and to allow Red Cross workers to provide people with the help they need,” said Rachel Bernhard, the head of the ICRC’s delegation in the DRC.

With additional displaced people arriving, living conditions in the makeshift camps are extremely difficult. In the village of Kanyaruchinya, around ten kilometres from Goma, more than 3,600 people have taken refuge in churches and in and around a school. Most of these people are women and children.

“Families are crammed into classrooms. Others are sleeping on the ground in the courtyard outside the school alongside their livestock, with no protection from bad weather. They need water, shelter and food. Poor hygiene, overcrowding and a lack of clean water are all risk factors that could lead to a cholera outbreak,” said Raphaël Ténaud.

In response to the emergency, an ICRC team has set up water bladders to improve the hygiene conditions and meet the daily needs of 10,000 people, including those who had fled the volcanic eruption [2]. In a notable show of solidarity, this latter group welcomed the newly displaced families.

The ICRC will continue to make every effort to obtain the security guarantees needed for its teams to reach people whose access to medical care and essential items has been severely hampered during this period of armed clashes.

“We are seeking to maintain confidential, bilateral dialogues with the armed forces and armed groups to ensure that civilians are respected and protected and that the sick and wounded can be evacuated without hindrance,” added Rachel Bernhard.

Facts and figures for April and May 2022 in Rutshuru Territory

Working in coordination with the DRC authorities and with other humanitarian organizations, the ICRC is prepared to meet the needs of displaced people and host communities by providing medical care, drinking water, food and essential household items. As part of its work, the ICRC strives to bolster the capacity of existing facilities, particularly in the area of water and medical care.

In Rugari, around 13,900 people received one-month food rations along with essential household items.