Ebola: Stepping up the humanitarian response 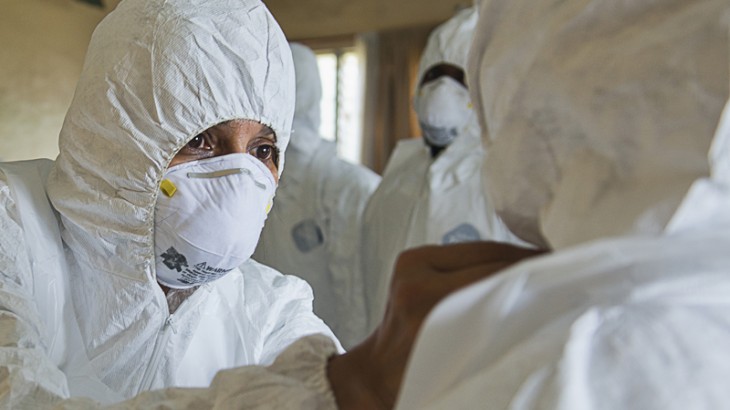 The devastating effects of the Ebola epidemic in Liberia, Guinea and Sierra Leone have put a strain not only on the countries’ health-care systems but also on their economies. As the authorities and the international community respond to the influx of Ebola patients, the ICRC is making its expertise available to health facilities and aid workers dealing with the outbreak.

In early 2014, Ebola fever broke out in remote rural districts of Guinea and later spread to Liberia and Sierra Leone. Cases have been reported in the densely populated capital cities of all three countries, where the risk of contagion is particularly high. According to the World Health Organization (WHO), by 22 September 2014 an unprecedented 5,843 people had contracted or were suspected of having contracted the disease, and over 2,800 people had died from it. These figures are not representative of the total number of cases, as some people infected with the disease do not seek or have access to care. Efforts to stem the epidemic have proven to be a daunting task as authorities and health facilities struggle to cope with the magnitude of the outbreak, and the crisis is simply too big for humanitarian agencies to deal with on their own.

Public health systems in all three countries, already weakened by protracted conflicts, are struggling to implement measures to contain the virus. Dedicated Ebola centres are few. Health workers lack specialized equipment and training. Some succumb to the disease, while others refuse to work for fear of infection.

The WHO has repeatedly called for humanitarian agencies and States to reinforce the health systems of the countries affected by the epidemic. Only a few have responded. Médecins Sans Frontières (MSF) runs Ebola treatment centres in the three countries, while the respective National Red Cross Societies work to properly dispose of human remains. The International Federation of Red Cross and Red Crescent Societies has opened an Ebola treatment centre in Sierra Leone. In neighbouring countries, including Guinea, Côte d’Ivoire and Senegal, National Societies are raising awareness among the public of risk-prevention measures with support from the International Federation.

How has the ICRC contributed to the response?

The ICRC has a longstanding presence in the region. In Liberia, its delegation works to protect and assist people made vulnerable by years of civil war, while the delegation in Guinea mainly seeks to protect violence-affected people. In both countries, the ICRC visits detainees and supports the authorities in detention-related matters. In 2013, the ICRC closed its Freetown office in Sierra Leone, owing to the decreasing needs at the time; we continue to run activities in the country from the Guinea delegation.

In connection with the Ebola outbreak, the ICRC and the International Federation – which is leading the response efforts of the entire International Red Cross and Red Crescent Movement – are providing support for National Societies, humanitarian organizations and the authorities, and, in coordination with them, conducting assistance activities for Ebola-affected people.

At the onset of the epidemic, the ICRC delegation in Liberia closely monitored the situation as it developed, and provided support for the Liberia National Red Cross Society and other organizations. For example, the ICRC held workshops on psychosocial support for National Society volunteers, hotline responders, health staff and others to enable them to ease the anguish of Ebola victims or their families. ICRC forensics experts provided specialized advice, training and supplies to help manage dead bodies. Expert advice from an ICRC medical logistician also helped the health ministry and some humanitarian organizations to better manage and store their supplies.

The ICRC made available to Liberia's health and justice ministries its technical expertise in handling suspected or confirmed cases of Ebola among detainees by taking preventive hygiene measures and making sure that detainees had access to safe water. In addition, the ICRC providing extra food for malnourished detainees.

In Guinea, support and donations of equipment from the ICRC are helping the Red Cross Society of Guinea respond to needs generated by the Ebola outbreak and other emergencies. Additional financial support from the ICRC has enabled the National Society to hold public information sessions on communicable diseases and train over 280 volunteers in disease prevention, disinfection of homes and proper management of human remains. Prison authorities in the country have taken measures to prevent the spread of the disease, for example by promoting regular hand-washing, with ICRC support.

The ICRC has also taken all the necessary steps to ensure that its staff and their families are properly informed and equipped to protect themselves from infection and that they have access to specialized treatment, in particular by adopting and implementing WHO-approved measures adapted to the working environment.

How is the ICRC stepping up its response?

The ICRC is deploying additional staff, including health and forensic professionals, an engineer and an economic security specialist, to support newly launched and ongoing activities in Liberia.

The International Federation is leading the activities of the International Red Cross and Red Crescent Movement in response to the Ebola outbreak. To find out more about its work in the countries affected, go to: www.ifrc.org/ebola-crisis