Ethiopia: From despair to joy for two teenagers reunited with their mother 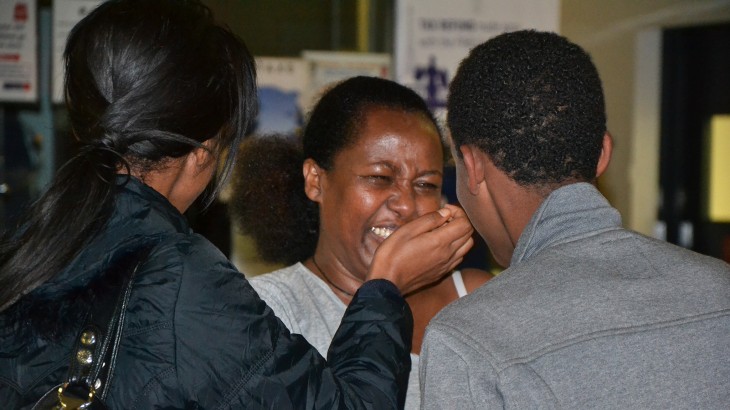 The children’s mother (centre) embraces her son (right) and daughter (left) at the airport in Paris. ©French Red Cross

Two Eritrean teenagers, their young lives in ruins, have been reunited with their mother in France following efforts by the ICRC in cooperation with the Ethiopian Red Cross Society, the French Red Cross and the UNHCR.

For *Asmerete (16) and Yemane (14), seeing their mother again was once a distant hope. "The pain of separation will be over soon. Our whole existence has been filled with sorrow, but now we have been brought back to life," said Asmerete, expressing her own joy and that of her younger brother on the eve of being reunited with their mother after five years of separation.

The two teenagers were born and grew up in the small town of Mendefera in Eritrea. They lost their father when they were very young. Looking for a job, their mother left Eritrea for France in 2010, leaving the children with their grandmother. They were only 12 and 10 years old respectively at the time.

"When I was a little kid I remember how thrilled I was to have a mother, so much caring and loving. But with her gone, I felt empty," said Asmerete, recalling the pain she suffered after the separation. She and Yemane had to survive with their grandmother on the little money sent by their mother.

When their grandmother developed a terminal illness and eventually died, the youngsters were unable to go beyond their 6th and 4th grades, respectively. This meant that their childhood dreams of pursuing their education and becoming self-supportive citizens had suddenly evaporated. Since they had no one to turn to, they decided to go to Ethiopia.

In 2011, they began their journey unaccompanied. Fortunately, while crossing the difficult terrain bordering Sudan and Ethiopia, they met a woman named Marta, who herself was fleeing to Ethiopia. Accompanied by Marta, the two minors somehow managed to reach Addis Ababa after a long and exhausting journey.

In Addis, Asmerete and Yemane lived with Marta, who became their guardian. When Marta decided to leave Ethiopia, she left them with another woman who promised to look after the children as long as their mother agreed to send her money. 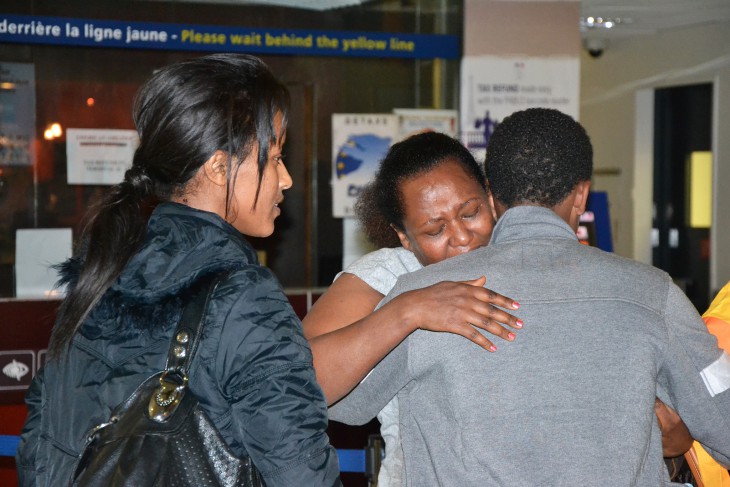 The children's mother gives her son an affectionate hug as her daughter looks on. ©French Red Cross

It was at the beginning of 2013 that the ICRC, at the request of the Ethiopian Red Cross Society (ERCS), started providing support to the minors. The ERCS had learned of the helpless condition of the children after visiting them at the end of 2012.

"When we first visited Asmerete and Yemane we found that they were psychologically disturbed by the separation from their mother," said Mulatu Gebremariam, an ICRC tracing officer. "They couldn't go to school due to the language barrier and spent all their time in the single room they shared with their caretaker and her daughter. Thus we did what we could to ease their plight."

The process of reunification began in early 2013 after the children's mother, by now a recognized refugee in France, told the French Red Cross that she wanted to be reunited with her children. It took almost two years to get all the legal documents in place to enable Asmerete and Yemane to join her in France.

Thanks to a lot of hard work, they were reunited with their mother on 9 October 2014. "I don't know what to say," said Asmerete, tears rolling down her cheek as she and her brother departed from Addis Ababa Bole International Airport for Paris. "Thank you all for the realization of our dream."

*The children's names have been changed