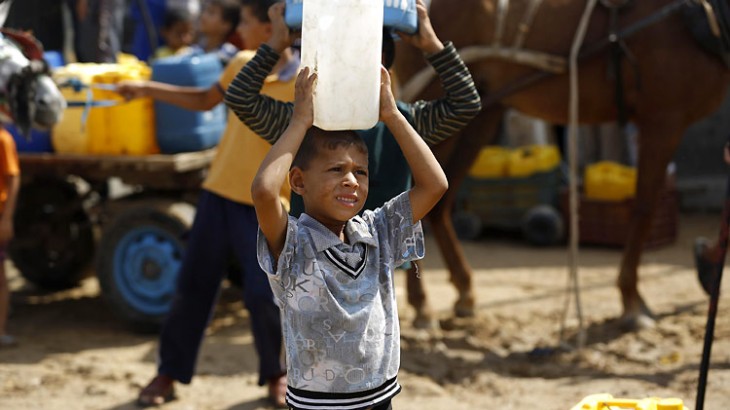 Large segments of the population of the Gaza Strip are still deprived of safe drinking water. Repairs to sewage systems and the restoration of basic electricity services remain urgent.

Water and power facilities in Gaza were already at breaking point before the recent conflict, which further damaged the sewage network as well as the territory's only power plant.

Destroyed sewage systems not only sent wastewater flooding into the clean-water networks but also into the environment, worsening the risks to public health. This aggravated an already serious situation resulting from the fact that the Strip had previously been discharging nearly 100,000 cubic metres of wastewater into the sea every day.

Emergency efforts carried out by the ICRC have so far provided water for over 600,000 people – at least one third of the population – and helped restore over 80 per cent of the limited electricity service for inhabitants. More sustainable improvements in vital infrastructure are needed, however.

"The equation is simple," said Guillaume Pierrehumbert, the ICRC's water and habitat coordinator for the Gaza Strip. "The shortage of electricity prevents water from being cleaned, evacuated, treated, desalinated and restored to homes, hospitals and businesses. There is an overall lack of water, and the water that is available is salty, dirty or dangerous to drink."

Generators are therefore needed as a back-up to perform simple daily activities. These require extra fuel – a scarce commodity in Gaza, where financial resources are limited.

"Just imagine how the water system in this densely populated urban area has been maimed," said Mr Pierrehumbert. "The effects are seen, smelled and felt everywhere, but are most worrying in hospitals where the safety of people who are in greatest need is jeopardized."

Some critical services in hospitals require a permanent power supply which can only be provided by fuel-hungry generators. In addition, the poor quality of the water that is available – particularly its high salinity – is adversely affecting services such as haemodialysis which depend on pure water.

Great challenges persist. Areas such as Beit Hanoun (40,000 inhabitants) and Shujaya (35,000 inhabitants) are still exposed to health hazards and the strong stench of destroyed sewage systems. It is estimated that more than a year will be needed to restore the situation to pre-war levels.

"Renovation of basic infrastructure is urgent, and requires an effective coordination of human effort and material resources," explained Jacques de Maio, head of the ICRC delegation in Israel and the occupied territories. "Speeding up the import of materials is vital given the depleted stocks of crucial equipment and spare parts. In one of the world’s most densely populated areas, we cannot afford to take chances with public health."

Since the beginning of the crisis, in continuing cooperation with the Palestine Red Crescent Society, the ICRC has also:

A water tank in Khuza'a, one of the most damaged areas in the Gaza Strip. M.Jiménez

During the recent hostilities, the Gaza power plant (pictured) was shut down. M. Jiménez

Rafah. A large shopping centre that was destroyed during the bombings. A. El Baba.

The ICRC is providing 30,000 litres of fuel in order to supply power to the generators of nine desalination plants. A. El Baba.

The ICRC distributes large bottles of water to displaced people in Gaza City. A. El Baba.

Gaza City. ICRC staff load a vehicle with essential items for distribution. A. El Baba. to the displaced.