The ICRC in Afghanistan – Overview 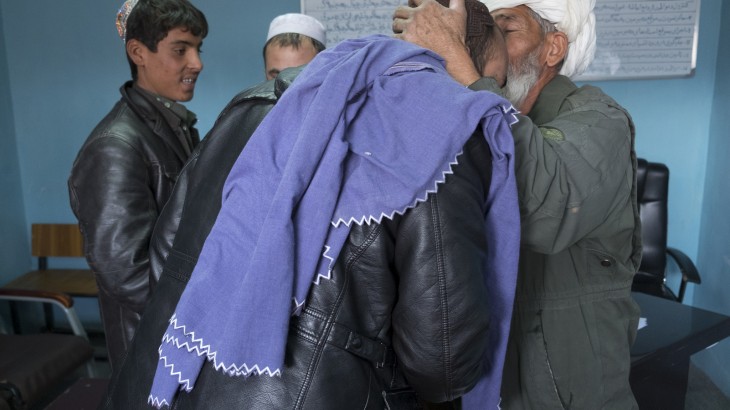 Pul-i-Charkhi prison, Kabul, Afghanistan. A man is able to embrace his detained relative for the first time in many years, thanks to the ICRC's programme enabling people to visit relatives in detention. CC BY-NC-ND / ICRC / O. Moeckli

In Afghanistan, the ICRC focuses on monitoring the conduct of hostilities and working to prevent violations of international humanitarian law, visiting detainees and assisting civilians affected by the conflict.

We help separated relatives keep in touch and act as a neutral intermediary to enable humanitarian action to take place across front lines. The ICRC assists the wounded and disabled, supports hospital care and improves water and sanitation services. We are also helping to strengthen the Afghan Red Crescent Society.

The situation in Afghanistan

Widespread conflict continues to devastate the lives of Afghans in many districts and villages. Civilian casualties, internal displacement and lack of medical care are only some of the problems. And they all occur against a backdrop of splintering armed groups, night raids, air strikes, suicide bombs and improvised explosive devices. The expansion of the conflict to previously quiet areas has increased people's difficulties and left whole communities trapped between the warring parties. The south, east, north, north-west and central regions are the worst affected.

In this highly complex situation, in which access to those in need remains difficult, the ICRC has had to adapt its approach in order to reach and assist the most vulnerable. Increasingly, we work through local partners, including the Afghan Red Crescent Society (ARCS) and we are developing a dialogue with influential leaders of civil society to make our mandate and action more broadly understood and accepted. Since 2009, we have increased the number of offices around the country, so as to be present in the areas of most need.

ICRC delegates collect allegations regarding violations of international humanitarian law (IHL) and make confidential representations to the parties to the conflict to try to prevent further violations. They also remind the authorities and weapon bearers of their obligations under IHL, particularly with regard to the conduct of hostilities and the duty to protect people who are not participating in the fighting.

The ICRC's delegation in Kabul was established in 1987. Before that, we had been helping victims of the Afghan conflict in Pakistan for eight years.

Visits to people detained by the Afghan authorities and the international military forces remain a top priority in order to monitor the treatment and living conditions of detainees and to ensure that judicial guarantees are respected.

We also endeavour to restore or maintain links between members of separated families.

In addition, the ICRC offers its expertise on prison infrastructure to help the Afghan authorities renovate prisons and improve inmates' health and hygiene.

Access to health care remains difficult in many of those areas where security is poor.

The ICRC trains Afghan Red Crescent staff and volunteers to help them carry out humanitarian programmes for the community.