International Day of the Disappeared: Indifference to a humanitarian tragedy 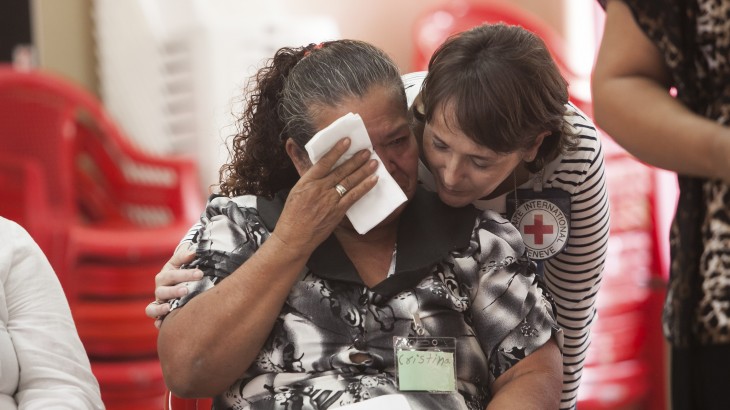 The president of the International Committee of the Red Cross (ICRC), Peter Maurer, has called on governments to urgently address the humanitarian issue of missing people: those who disappeared during armed conflict or other situations of violence, natural disasters or migration.

Speaking ahead of the International Day of the Disappeared on 30 August, Mr Maurer said that concerted efforts were needed to ascertain and document the fate of people who had gone missing and to provide families left behind with answers and effective support.

"This is a tragedy affecting millions, but it remains vastly unacknowledged and under-reported. Such indifference is extremely disturbing," Mr Maurer said. "Disappearances are often a sensitive social and political issue, but that is no excuse for inaction. Governments must generate the political will necessary to provide answers. Steps must be taken to prevent disappearances, and to collect all the information available when people do disappear, because, at some point, this information might help bring answers to families and other loved ones."

Exactly how many people are missing throughout the world is not known, but the ICRC estimates their number to be at least in the hundreds of thousands. They include combatants missing in action, children who became separated from their families when they fled their homes or were forced to join armed groups, detainees unable to contact their families, and internally displaced people and migrants who have lost touch with their loved ones. It should be remembered that large numbers of people are at risk of disappearing every year.

The lack of accurate figures is itself part of the problem. Numbers cannot, however, convey the depth of suffering endured in each individual case. It should therefore be cause for immense concern that the issue of missing people – the full scale of the problem and its impact on families, communities and societies – is often simply ignored.

The ICRC is calling on governments to step up their response, to develop suitable legal frameworks, and the necessary systems and procedures, to account for people reported missing, and to provide effective support to families.

"Those with influence and in a position to help, should take the opportunity of the International Day of the Disappeared to recommit themselves to this issue," Mr Maurer said. "To remain in the dark, not knowing what has happened to someone you love: imagine the pain this must cause. For the sake of humanity, more has to be done."