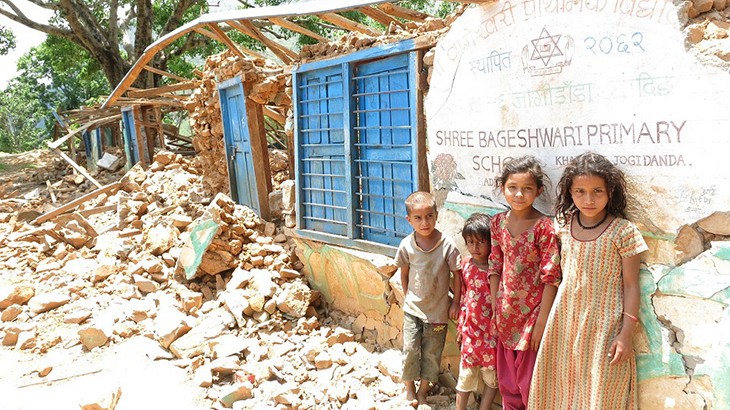 Children struggle to comprehend the wrath of nature that has flattened their school at Khalte village, Dhading. CC BY-NC-ND / ICRC / Devendra Dhungana

A powerful quake, then hundreds of aftershocks. Death and destruction have brought fear and nightmares in their wake. Psycho-social support to hard hit communities aims at healing the minds of earthquake-affected villagers, before some develop chronic symptoms.

"All of us are victims of the earthquake. Let us come together, listen to each other's stories. It is very necessary at this time to release our pent up emotions. Will you do this with us?" Some seventy women, men, children, two suckling babies, and even a goat had gathered under the shelter villagers had recently erected, using salvaged materials from what were once their homes.

Most of the survivors in Khalte, a remote village perched on a hill in Central Nepal, were listening to Jaya Shree Silpakar, one of two Nepal Red Cross Society (NRCS) counsellors who had come to provide basic psycho-social support. 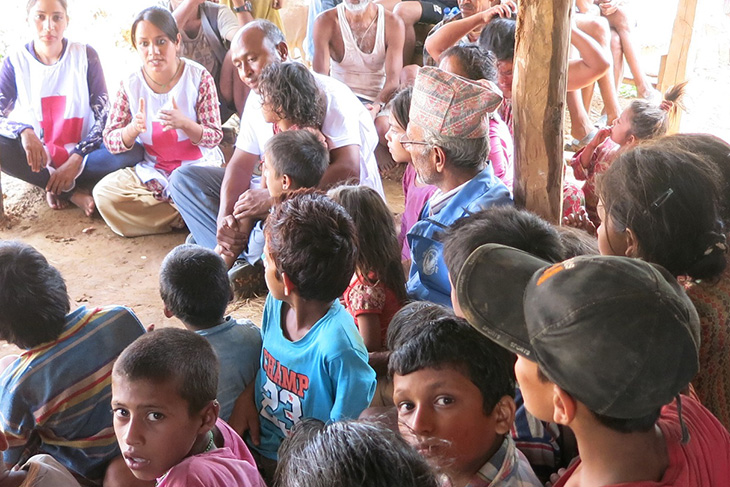 Jaya Shree Silpakar (second from the left at the back) applies her psycho-social first aid skills to help earthquake-stricken villagers express their fears and concerns. CC BY-NC-ND / ICRC / Devendra Dhungana

On the 25th of April, 55 seconds sufficed to reduce most of Khalte's mud and stone houses to mounds of rubble. Ten people died, another 12 were injured. Most of the villagers' livestock was crushed in their sheds, while rice and millet seeds for the next planting season got caked in mud. Had it not been a Saturday, the only day off in Nepal, the total collapse of the school would have meant so many more victims.

After Jaya had stopped speaking, there was a long silence. Talking publicly about emotions is not a Nepali tradition.

Suddenly, a middle-aged man broke out in a high voice: "I continuously have nightmares. I see cracked houses, the dead walking again. It frightens me so much."

And then it was as if he had opened the floodgates. Everyone started talking at the same time, confirming that they too had nightmares, they too could not shake off the fear, the pain, the constant expectation of another violent tremor. Mothers spoke of their children who were arguing all the time, or keeping too silent, who had mood swings, refused to play and clung to their parents. 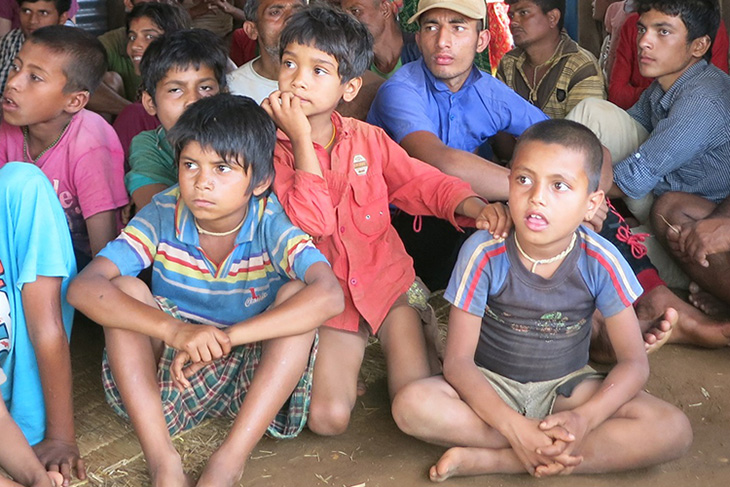 Psycho-social first aid sessions, provided by the ICRC, are helping earthquake-affected villagers to overcome their fears and to move on with their lives. CC BY-NC-ND / ICRC / Devendra Dhungana

Jaya, a diminutive 24-year old, was giving the floor to each one in turn, listening intently to each speaker, her face full of empathy and warmth, uttering an encouragement when it was needed. At the end of the session, Jaya asked the assembly to close their eyes for one minute and "think kindly of the departed souls, thank nature, which has been cruel, but has nonetheless spared us, and promise to ourselves to move forward with greater solidarity."

Silence fell again, until one, then several children laughed. And all of a sudden, people broke into cathartic laughter.

"The nani haru (young women) allowed me to breathe freely again," said Chitra Kumari Agasthi, a beautiful grey-haired woman. "They made me understand that it was normal to feel the ground shaking under my feet even when there is no quake, to go fetch water and realise when I arrive at the source I have no vessel with me. I know now that I won't be like this forever." Next to her, Jaya and her companion were consoling a woman who was sobbing over the death of her mother-in-law. "It was lunch time. When we took her from under the fallen house, she was still clutching a mouthful of rice in her hand," the woman kept repeating.

The programme, carried out by the NRCS in five districts, was born out of the ICRC's previous work with families of those gone missing during Nepal's ten-year internal conflict.

"We try to allow people in highly affected areas to express their fear, to better prepare on living with uncertainty, and to understand that their reaction is the normal answer to an abnormal event. It is a way to prevent the initial trauma from becoming chronic," said Yubaraj Adhikari, ICRC head of the psycho-social programme.

"Thank you," said Chitra Kumari when time had come for the counsellors to leave for another village. "I wish you could stay with us longer."