Nigeria: Aid for more than 50,000 violence-displaced people in north-east 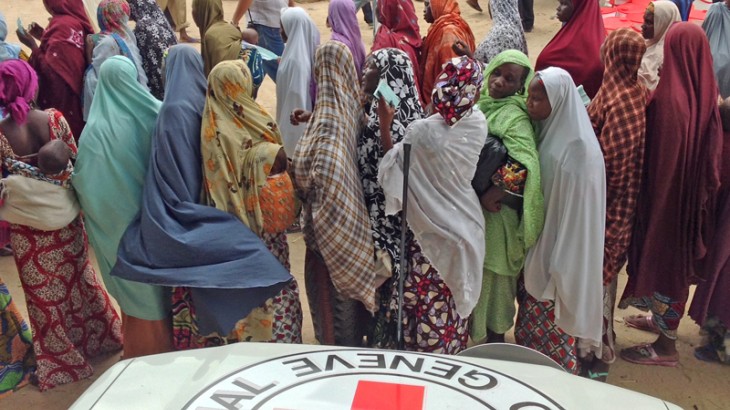 Maiduguri, Nigeria. Thousands of families displaced by violence in the north-east of Nigeria queue up to receive food and essential household items during a distribution carried out by the ICRC and the Nigerian Red Cross. CC BY-NC-ND / ICRC / A. Ahmed Hersi

Thousands of people displaced by conflict in north-eastern Nigeria have taken refuge in Maiduguri.

On 3 November, the ICRC and the Nigerian Red Cross Society completed the distribution of food and household essentials to over 50,000 people living in extremely difficult conditions. "Not only did people have to flee their homes in Kodunga, Kaga, Gwoza and Damboa, they also lost all their belongings and their means of earning a living. They didn't have enough food and they lacked important basic items," said Karl Mattli, head of the ICRC delegation in Nigeria. "The additional strain placed on communities by hosting the displaced reached the point where it was more than they could bear."

After carrying out an assessment of the situation, the ICRC and the Nigerian Red Cross launched an emergency operation to meet urgent needs. ICRC staff and more than a hundred Nigerian Red Cross volunteers distributed 960 metric tonnes of food and other relief items to 51,000 people.

Food and other items for needy people in the north-east

Most displaced people who arrived in Maiduguri in the past few months were settled in government buildings, schools or official camps. Some stayed with relatives or host families, with whom they shared scant resources, while others found refuge in informal settlements. Whatever their living arrangements, the displaced cannot afford to buy their own food and therefore have had to depend on aid provided by the State or on the generosity of others to survive.

"In the short term, the aid we have just distributed will improve significantly the well-being of the displaced," said Janet Angelei, an ICRC economic-security specialist working in Nigeria. "The kitchen sets, blankets, soap, mats, hygiene items and tarpaulins we have provided will meet some of their immediate needs and reduce the burden on the hosting families."

The ICRC also distributed about a month’s supply of rice, beans, oil and salt. "Since fleeing our homes, we had not received any significant help," said Abdullahi Abuya from Konduga. "Some of us had barely had anything to eat for weeks, but now things are better." 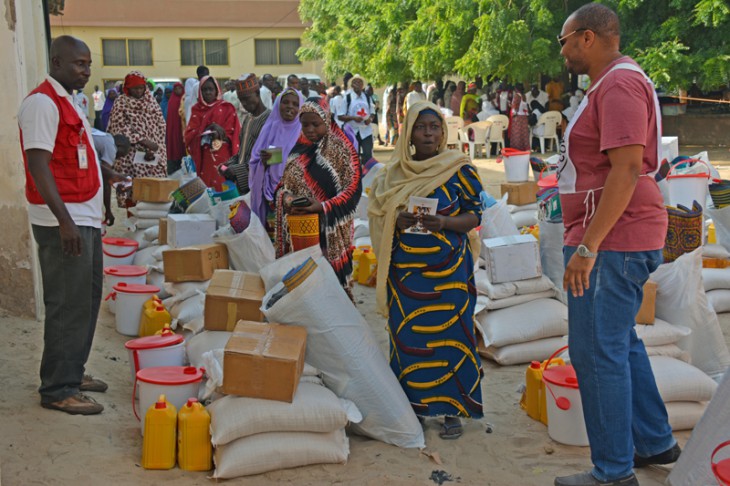 Maiduguri, Nigeria. Displaced women who lost everything due to the conflict in Borno state and who were living in extremely difficult situations step forward to pick emergency supplies from the ICRC and the Nigerian Red Cross. [CC BY-NC-ND / ICRC / A. Shaffa]

In cooperation with the health ministry, the ICRC has undertaken to upgrade the Mala Kachalla primary health-care centre in Maiduguri and to train the centre's staff. It has built a water tower with a 4,000-litre tank and installed a solar-powered water-supply system. In addition, it has completely renovated the facility's floors, ceilings, doors and windows. "The centre, which is now fully operational, offers general outpatient services with a special focus on children under five years of age, ante-natal, delivery and post-natal services, and patient stabilization prior to referral for secondary care," said Bernadette Gleeson, head of ICRC surgical and first-aid programmes in Nigeria. Because of the displaced people arriving in Maiduguri, the centre's catchment population is now estimated to be in excess of 100,000.

Emergency aid for Nigerians who fled to Niger

Civilians fleeing fighting between the Nigerian army and armed groups have recently arrived in the Diffa area, in easternmost Niger. The displaced, mainly women and children, arrived from the Abadam area and Nigerian villages near Lake Chad. They have lost everything and are entirely dependent on host communities and on aid provided by humanitarian organizations. At the beginning of October, the ICRC and the Red Cross Society of Niger distributed food to more than 2,000 people in Diffa and to over 3,500 people who have taken refuge on islands in Lake Chad.