Pakistan: Karachi says no to violence against health-care workers 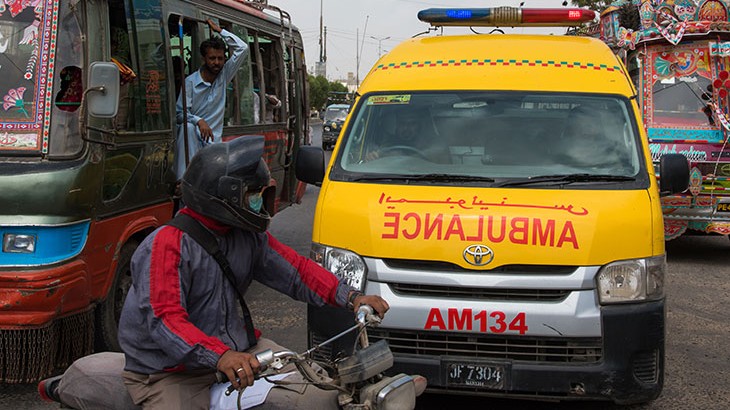 The News, a major newspaper in Pakistan, recently reported that 130 doctors were killed and 150 kidnapped in Karachi alone between 2012 and 2014. This comes on top of other violent incidents that result in injuries to health workers and damage to hospitals, ambulances and equipment.

Violence against health services in Pakistan is an all too familiar occurrence. But now an exemplary initiative is tackling the problem, one which could be replicated elsewhere in Pakistan and beyond. In 2014, the ICRC's delegation in Pakistan, the APPNA Institute of Public Health, the Jinnah Postgraduate Medical Centre (JPMC), the Research Society of International Law (RSIL) and the Indus Hospital joined forces to launch a Health Care in Danger project to protect health workers in Karachi.

The project has three main components. First, in 2015, the RSIL and the ICRC reviewed the legal framework for providing health services in Karachi. The objective was to identify gaps in the legal system and make recommendations for the government to strengthen domestic legislation that would safeguard health workers and patients.

Second, the APPNA, the JPMC and the ICRC carried out a study into violence against health services – the types of violence and their impact and how they were seen and/or tolerated – and suggested ways to tackle the problem.

Third, the ICRC with some of its partners and two major ambulance operators in the city, the Edhi Foundation and Aman Foundation, launched a public awareness campaign on the importance of respecting and protecting ambulance services.

In an interview with Dr. Seemin Jamali and Prof. Lubna Baig, they talk about their experiences with the project in Karachi.

Why did you decide to get involved in the Health Care in Danger project?

Dr Seemin Jamali: Having managed Karachi's busiest emergency room for over 25 years, I've seen more than my fair share of violence and threats against health services. My colleagues and I have seen patients killed by rival militias in hospital beds before our own eyes. We've been threatened by men brandishing Kalashnikovs inside the hospital.

We've routinely faced angry men who demanded we revive people brought in on stretchers who were already dead. We've had wounded suicide bombers brought into the ward with explosives still attached to their bodies. Once, I was thrown into the air by a blast wave when a follow-up attack targeted our hospital – which was already full of dead and injured people and their families.

When the ICRC approached me for this project, they didn't need to convince me we needed to do something in Karachi to change all this.

Prof. Lubna Baig: The issue was close to my heart. I have faced varying degrees of violence in my career as a doctor, and many of my friends in the health-care sector have suffered major injuries. Some have died and a number of able professionals have left the country because of threats or violence.

As a researcher, I wanted to explore the depth and breadth of the problem, and I was not surprised to find that what the media report is the tip of the iceberg. This was the first public health study on violence of this size in Karachi. We had 822 replies to our questionnaire, and did 17 focus groups and 42 in-depth interviews with doctors, nurses, paramedics, security guards and other hospital staff, ambulance drivers, and people from the media and law enforcement agencies (Citizens Police Liaison Committee, Pakistan Rangers and the police).

This was also the first ever study that was done by multiple partners and combined quantitative and qualitative research. Almost two-thirds of the participants had either experienced or witnessed some kind of violence in the past year and one-third reported having experienced some form of violence. Verbal violence was more prevalent than physical violence. Multiple perpetrators were involved in almost half of the incidents. The people accompanying patients were the main perpetrators, followed by unidentified persons. Emergency departments and wards were the most common sites of violence.

How are you using the results of the research?

Prof. Lubna Baig: The results gave us an understanding of the complexity of the issue and now we're turning the recommendations into meaningful action, such as a public campaign to promote respect for ambulance services. For me, real steps based on a frank analysis of the problem are what can really make a difference to people's lives.

Dr Seemin Jamali: Among other findings, the study highlighted health workers' lack of training in dealing with violence. So we have set up a series of workshops to remedy this. The response of my staff has been overwhelmingly positive. People have been volunteering to take part in the courses on managing and de-escalating violence. During the session there is always a time when people open up and start talking about their experiences. And believe me, everyone here has a story to tell! We hope the skills they are taught will help them stay safe while on duty, but I think already just somebody paying attention to their problems is therapeutic.

What challenges have you faced in this project?

Prof. Lubna Baig: Some health-care institutions have not been very cooperative and we've come up against some obstacles to do with law enforcement operations in Karachi. There are also differing views, which we have to counter, on the approach to be adopted to protect health workers, like for example allowing them to carry guns.

Dr Seemin Jamali: This is something that should have been addressed a long time ago. Inaction against the recurrence of violence is dangerous because it can develop into acceptance, which then becomes more difficult to change. Some people may think health workers are heroes, but it doesn't mean they should have to put up with senseless violence that stops them from doing their work. We must not be afraid to say no to violence against health care.

Dr Seemin Jamali is the joint executive director of the Jinnah Postgraduate Medical Centre in Karachi. Prof. Lubna Baig is the pro-vice chancellor of Jinnah Sindh Medical University and the dean of the APPNA Institute of Public Health.