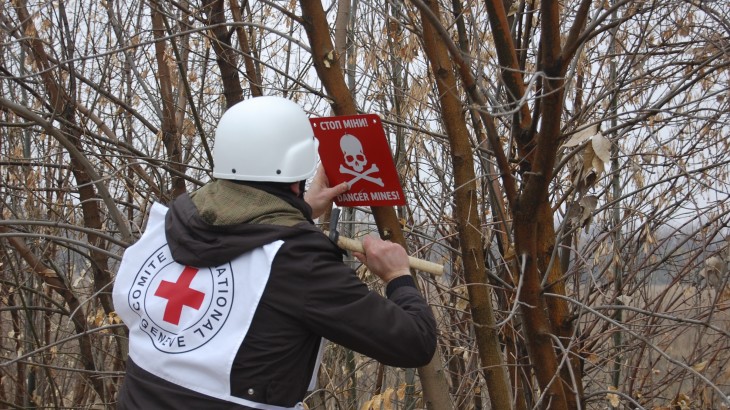 Geneva - The International Committee of the Red Cross regrets the decision by the U.S. government to loosen current restrictions on its military's use of mines. Decades of use of anti-personnel mines have left a long-term legacy of death, injury and suffering. More than 60 million civilians today still live with the daily fear of landmines and explosive remnants of war. The re-introduction of anti-personnel mines into any military's arsenal has the potential to escalate this threat.

Anti-personnel mines are defined as mines "designed to be exploded by the presence, proximity or contact of a person and that will incapacitate, injure or kill one or more persons". In other words, they cannot distinguish between soldiers and civilians. Even non-persistent anti-personnel mines (so-called "smart" mines) indiscriminately endanger civilians while they are activated.

If victims are not killed immediately by a mine, they are left severely injured, facing life-long disability. Long after wars end, landmines can go on killing and maiming, while disrupting access to essential services, putting vast areas of valuable land out of use, compromising food production and destroying livelihoods, sometimes for decades.

The ICRC, based on its first-hand experience providing humanitarian assistance to mine victims in mine-affected countries worldwide, has long supported the prohibition of the use, stockpiling, production and transfer of anti-personnel mines, as established in the 1997 Anti-Personnel Mine Ban Convention. The ICRC continues to oppose any use of such weapons. Our stance against all types of anti-personnel mines has been a bedrock position of ours since 1994, when we publicly called for a global ban.

The ICRC will continue to focus on and prioritize victim assistance, mine risk education, risk reduction and cooperating with partners specialized in clearance, while strongly encouraging all States not to use these weapons because of their indiscriminate effects, and we will continue to urge those 33 States that are not yet party to the Anti-personnel Mine Ban Convention to join this important international treaty.

The ICRC and the Mine Ban Convention

The campaign to ban anti-personnel mines was one of the major humanitarian initiatives of the last three decades. The ICRC, along with governments, the International Campaign to Ban Landmines and the United Nations, argued for a comprehensive prohibition on their use, stockpiling, production and transfer. States responded by adopting the Anti-Personnel Mine Ban Convention, committing States to help the hundreds of thousands of mine victims, set clear targets for mine clearance, and destroy stockpiles.

Today, more than 20 years after the Convention's adoption, substantial progress has been made but great challenges remain, especially in addressing rising numbers of civilian casualties in recent years due to the continued use of anti-personnel mines in particular those of an improvised nature, removing the mines that remain in the ground and in relieving the suffering of the injured and their families.

To address the ongoing challenges, the Fourth Review Conference of the Convention – held in Oslo, Norway, in November 2019 – adopted the Oslo Action Plan, which sets out a global plan of action to address the threat of anti-personnel mines and assistance to mine victims.

For more information on anti-personal landmines from the ICRC, visit