Marie, a mother of four, is an asylum seeker from the DRC, she fled her home city of Goma in the Eastern Democratic Republic of Congo following an attack. She was separated from her biological family when she was 16 years old. She last saw them in 1996. 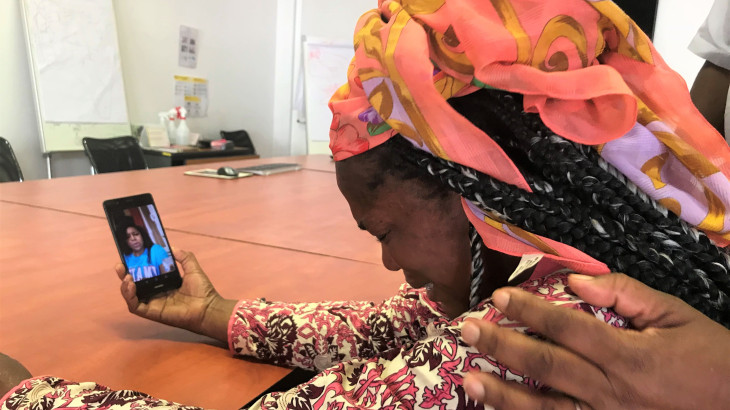 Marie, a mother of four, who hails from the DRC has been reconnected with her relatives. She was assisted by the Tracing Manager Hendrietta Letlape, at the Pretoria Delegation. Photo: Paulin Bashengezi Mushamuka.

Decades of armed conflict and violence in the Democratic Republic of Congo (DRC) have thrown thousands (918'000 according to the UNHCR) of people into exile. In their search for a peaceful place, very far from their country, many including women and children, often lose contact with their loved ones and as the years go on, the hope of finding them alive dwindles. But for many others, the search never stops; no matter how long and how much energy it takes, it continues in the hope that 'one day' will come.

The day when all started

In the suburbs of Pretoria, South Africa, 42-year-old Marie Mapendo mother of four, is an asylum seeker from the DRC. Following an attack on her home city of Goma in the Eastern DRC, she was separated from her biological family when she was 16 years old. She last saw them in 1996. She did not know whether her loved ones were dead or alive.

"We were kids, we didn't know what was going on. We just heard people starting to shout from everywhere and in the confusion, everyone had a few clothes on, and we started running not knowing where exactly we were going. We were just following the crowds of people running away," she says Marie.

Marie comes from a large family of 12 brothers and sisters. She remembers how they led a peaceful life in the city town of Goma until recurrent armed clashes which led to the First Congo War in 1996 hit the city forcing them to leave their family comforts.

"When night fell, my sisters and I used to run away whenever we heard dad's warning call. But one night, I ran away, and I never saw them again," narrates Marie.

It was in Beni (about 300 km from Goma) that Marie met a family that offered her shelter, food, and clothes. It there that she managed to go back to school and study nursing. Marie rebuilt her life despite the war and violence that continued to rage in the region.

"But deep inside of me I kept worrying about the fate of my family. I wondered what could be happening to them, I feared the worst," she explains.

Stay and die or try to survive

In 2009, she decided to leave the DRC with her two young daughters following the war where she was living and losing her husband. Surviving on meagre savings, she began her long journey for South Africa.

Traveling on foot, or sometimes hidden in the back of a truck, she set out for her greenest pastures in the war-torn Kivu region; towards Lubumbashi in the south-eastern DRC, and from there she managed to cross the border into Zambia and then further into South Africa.

"With the little money I had left, I negotiated a trucker who agreed to transport me and my daughters. We had taken a total of three days to arrive in Johannesburg. on the way, he had asked us to hide so as not to attract the attention of the police and above all not to eat or drink water because we had to avoid going to the toilet". Marie says.

In 2009, 14 years after fleeing her hometown of Goma and 3 days of grueling Marie finally reached Park Station in Johannesburg, South Africa.

"As I didn't know a single english word, I couldn't even ask the place where we reached. So, as we seemed to get lost with my daughters, a compatriot who lived in the city saw me hanging out with the children and quickly realized that I did not know where to go and led me to a church," she added.

Once in Johannesburg, Marie found started earning an income out of cleaning a church and that is how she settled with her daughters.

"But I have never stopped worrying about my family who stayed in the DRC and of whom I had no news about. There was always this little inner voice that didn't want me to start looking for them. I couldn't bear the bad news," she said.

And 'one day' has come

In 2019, Marie's story takes a twist yet again. Social protests happen and a business she had started is set ablaze. She then finds refuge in Lindela, a Migrant center in the suburbs of Johannesburg. While in her journey of searching for a stable life for her family she regularly changes town in search of new opportunities without ever finding them. Installed since in a makeshift camp for migrants and refugees in the suburbs of Pretoria, where she lives due to the generosity of charities and humanitarian organizations, Marie has since started to learn about the possibility of relocation outside South Africa "In America or perhaps in Australia" she says.

It is in this camp where she meets the International Committee of the Red Cross (ICRC) at the beginning of 2022 during a dissemination session for displaced people, migrants and asylum seekers organized by the. After learning about the activities of Restoring Family Links (RFL), an ICRC employee assisted her to install the mobile app "Trace the Face" that helps migrants and displaced people to search for their family members.

"Once while checking the app, I found a lady who looked a lot like my sister. I was pretty sure it was her. I was so excited that I quickly took a two-hour walk the ICRC office in pretoria to show them the photo of the person who looked like my sister," explains Marie, smiling.

This is how the ICRC's RFL service began the re-search based on this photo.

"We contacted all the national Red Cross societies in the world to trace this photo and finally, the French Red Cross managed to locate Marie's sister in a region of France," explains Hendrietta, Protection Data Manager at the RFL program in Pretoria.

The ICRC and the French Red Cross have since got in touch with Marie's sister and finally organized a restoring family contact through a video call early November. This was an emotional call that brought together siblings after separating for 26 years, when they both thought one might have died. Mixed emotions engulfed the siblings.

"I am so happy. Now I know that my children are not alone in the world, if I die or if something happens to me, at least I know that I still have a sister and they have an aunt", concludes Marie, full of hope.

Marie together with her daughters met their relatives who are back in the DRC virtually. Photo: Paulin Bashengezi Mushamuka.

Marie together with her daughters met their relatives who are back in the DRC virtually. Photo: Paulin Bashengezi Mushamuka.