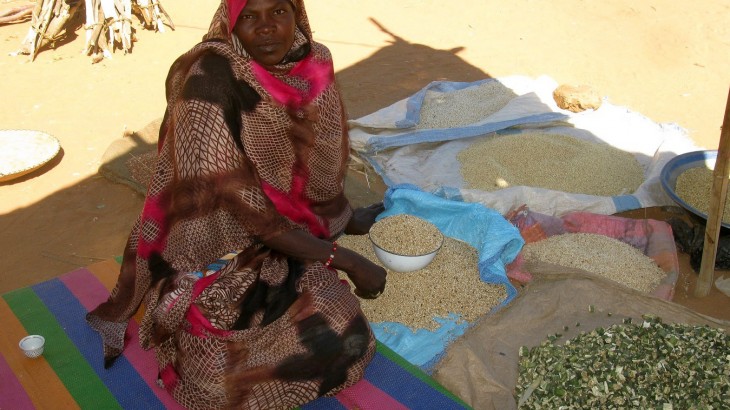 Hawa Haron is one of the people the ICRC has helped as part of its micro-economic initiative programme that provides financial assistance to the most vulnerable people with physical disabilities. CC BY-NC-ND / ICRC

In its efforts to reduce suffering and improve resilience especially among those affected by armed conflict, the ICRC recently provided financial resources as part of a programme specifically designed for the most vulnerable persons whose physical disability caused them to lose a significant part of their income.

Provided within the context of its Micro-Economic Initiative (MEI) programme and managed by the ICRC team that works to ensure the provision of economic security (ECOSEC) for affected populations, selected participants in Al Fashir were invited to a session on the ICRC as an organisation, its role, mandate and functions, and on details of the MEI scheme.

Based on the success of previous programmes, the ICRC undertook an assessment of potential beneficiaries which included household visits and interviews for selected individuals in the various project locations. Households that were found suitable according to the selection criteria received financial assistance in order for them to start their preferred income generating projects. The projects to be undertaken by them were of their individual choices, and not proposed to them by the ICRC.

Hawa Haron is one of the numerous beneficiaries of this program. She had lost the use of one leg some time ago. To compound matters, in 2011 her husband left without a trace, never to be seen ever again. The lack of a breadwinner put her four young children and her in dire straits, a situation that was compounded by the insecurity caused by the conflict that raged around them.

Hawa remained undeterred by these seemingly perplexing challenges and elected to forge ahead. At the ICRC supported physical rehabilitation centre, she was fitted with a prosthetic device that helped her regain the use of her other leg. She began working on farms, helping to cultivate and harvest produce. She also engaged in part-time trading in the market, selling vegetables, with the hope of raising some money with which to look after her children.

Her difficult economic situation did not discourage her from dreaming big for those kids, for whom she continued to work hard in the hope of giving them a better and brighter future. Indeed, she never hid the fact that she wanted them to continue their education despite the circumstances in which they found themselves.

Today, Hawa is poised to improve her business. Her determination and hard work, as well as her eligibility for receiving a grant from the ICRC under its MEI programme due to her status, are responsible for this. She is better able to exploit the opportunities before her with this additional resource.

According to her, "The MEI grant was like a lifeline." Indeed, the provision of this financial resource offers Hawa a greater opportunity to expand her business and actualise her dreams. Introspective, calm but focused, she clearly comes across as being more confident too. "I will now be able to generate better income and bear the responsibility that will help to provide food and even school kits for my children,"  she said.

While Hawa benefited from the service in Al Fashir, the ICRC runs a similar programme in Nyala, which provides persons with conflict-related disabilities with prostheses and crutches. In both places (Al Fashir and Nyala), those who benefited from the provision of this service also received financial support to help them engage in meaningful income generating activities so that they can become productive, independent and contribute to growing the economy of their respective communities. This ICRC programme also facilitates and strengthens social inclusion for this category of persons and helps rebuild and sustain their self-worth and confidence.