As water cuts in Aleppo reach an all-time high, the ICRC and its local partner organizations are asking for help in publicizing a GPS-enabled map that gives users the ability to pinpoint themselves in relation to a network of restored water wells throughout the city. 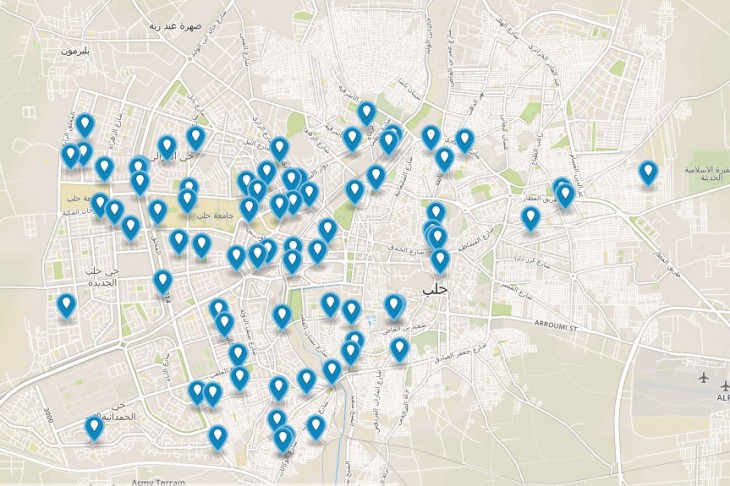 After working feverishly for months repairing dozens of antiquated wells to provide the people of Aleppo with safe drinking water, the ICRC and its local partners have hit an unanticipated problem: They don't have a foolproof way to inform people of the whereabouts of their new local water sources.

Alongside efforts to get the word out that include printing new maps and handing them out one by one, the humanitarian agency has created a new GPS-enabled map and has launched an appeal for help to distribute it to Syrians through social media.

The project began back in 2013, as violence steadily took over Syria's northernmost city. In partnership with the Syrian Arab Red Crescent and local community water boards, the ICRC began preemptive efforts at laying the groundwork for an alternative water network in Aleppo.

"The idea was born out of need," said Pawel Krzysiek, ICRC's spokesman in Damascus. "As the city became further divided and infrastructure continued to deteriorate, we realized the situation was likely to get much worse."

Along with local civil water boards on either side of the divided city, they steadily located and restored Aleppo's crumbling collection of water wells, the majority of which had not been used in decades.
And as water and electricity cuts in the bombed-out city worsened, so did the pace and importance of their work.

The humanitarian aid agency told Syria Deeply it is has now refurbished 80 water sources in Aleppo, each of which has been added to their online contingency water network map. The organization expects at least 10 more to be added in the near future. 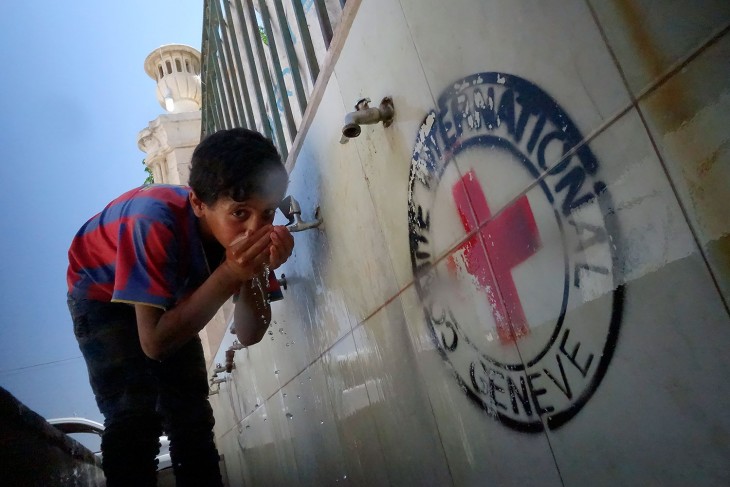 A child drinking water from the borehole rehabilitated by the ICRC. / . CC BY-NC-ND / ICRC / P. Krzysiek

An intensification of fighting to the city's south since the summer has meant increasingly long water cuts for Aleppo's 2 million residents, sometimes lasting up to two weeks at a time. But the increasing need for alternative water sources has apparently not translated into a parallel rise in use of the ICRC's new grid.

The problem is that residents simply don't know where the new working wells are, how to find them or that they even exist in the first place.

The ICRC considered passing out thousands of maps, but quickly realized that existing maps of the city were next to useless. Four and a half years of fighting have drastically changed the city's landscape. Not to mention that it would be next to impossible to distribute maps across the war-torn city, which has been fractured over the last two years into separate areas of control by government forces and a myriad of rebel groups.

Krzysiek said the ICRC communications team and its water specialists on the ground began looking into Internet usage in the area, and found a surprising number of people were still able to access Syria's 3G network with their smartphones – despite the power cuts.

"Since they're using smartphones, we assumed most had GPS capabilities," said Krzysiek. "So we transferred our simple map to a Google-styled open source map that we created, on which the GPS function is available."

The idea is that when water is cut people can pinpoint themselves in relation to the nearest and safest water point. Yet this innovative initiative has not taken off among the city's residents.
Water has been cut in Aleppo for 13 days as of Monday, November 9, and although humanitarian organizations were able to get fuel to the city's water pumps on Saturday, according to Krzysiek, the system still needs another 10 days before it will be able to build up enough pressure to pump water through the city's pipes.

"That's three weeks without any running water in Syria's largest city," said Krzysiek, "And that estimate is made with the hope that there will be enough fuel for the city's pumps to begin working, and that nothing will get stolen or damaged over the next 10 days."

When the city's water crisis is factored with the recent displacement of another 120,000 citizens in the area – the total number of internally displaced persons in the province is likely in the hundreds of thousands – and the onset of winter throughout the Middle East, the outlook in Aleppo is bleak.

Krzysiek said the need for awareness about the underused alternative network is now greater than ever. Accordingly, he's offered himself up to receive feedback from people in Aleppo and across the global community. He can be reached directly via the ICRC Twitter, Facebook or email – dam_com@icrc.org – with questions on the map and the city's new water points.

"We need help reaching people in Aleppo," said Krzysiek. "This is an urgent humanitarian appeal. Anyone with ideas on how we can share this initiative more widely should get in touch immediately."

This article was first published on the "Syria Deeply" website