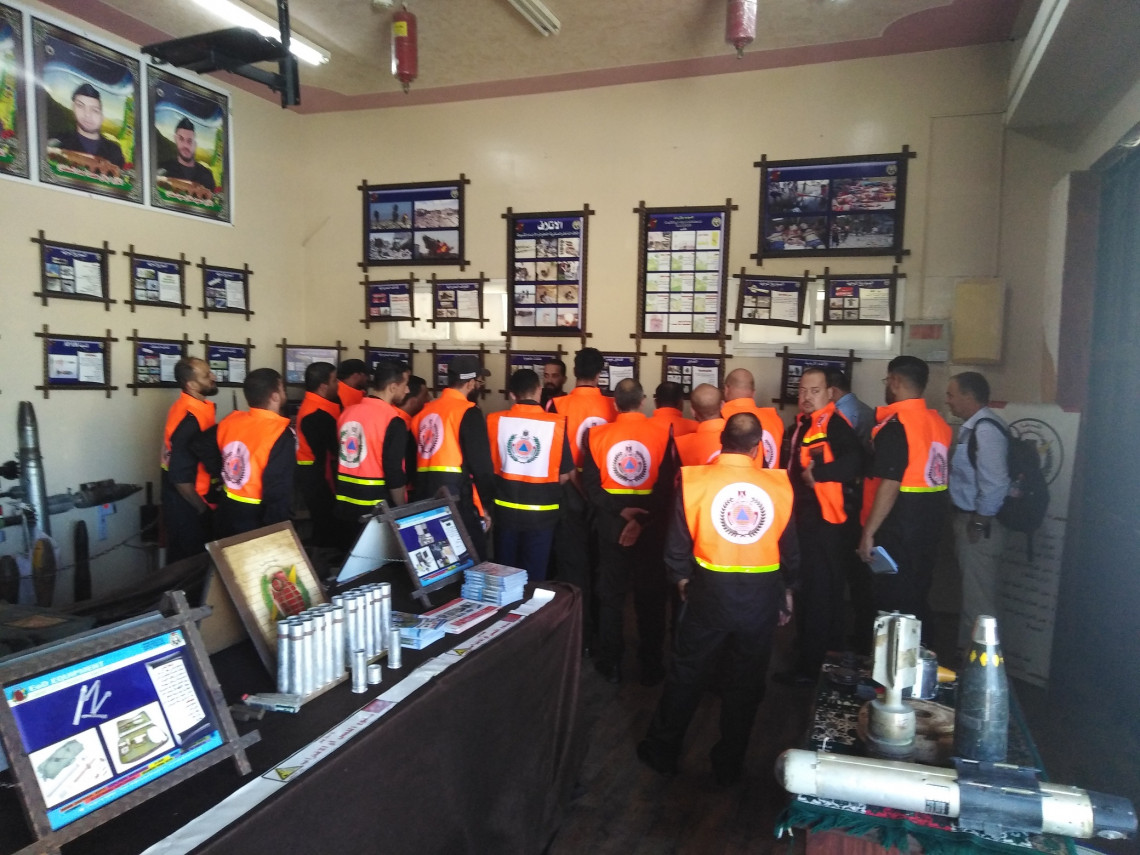 Working together to make Gaza safer

In the last three years, the Gaza Strip has seen around one accident caused by explosive remnants of war every month. The large number of weapons that have been leftover in the Gaza Strip conflict as well as industrially produced and stored toxic chemicals, not only present long-lasting challenges to lives and livelihoods there, but also hinder humanitarian and development efforts.
Article 04 April 2021 Israel and the occupied territories

Clearing the Gaza Strip of these dangers will take many years, possibly decades. In the meantime, educating local people about the risks is crucial.

Since 2014, the ICRC has been working with the Explosive Ordnance Disposal (EOD) Unit (under the General Police Directorate of Forensic Evidence) and the Palestinian Civil Defence (PCD) to make Gaza safer for its inhabitants. In addition, to increase the safety of their staff and the effectiveness of their work, the ICRC’s Weapon Contamination team provided training in risk assessment and education and donated equipment.

Rallying around a common goal

The ICRC and EOD are working together to mitigate the risks of unexploded ordnance and to ensure that Gaza can effectively deal with such risks during emergencies. “We share a common goal with the ICRC: to protect and assist civilians at risk of explosive remnants of war,” says Abu Hani, head of operations at the Gaza Police General Directorate of Forensic Evidence and Explosive Ordnance Disposal.

“The ICRC gave us basic safety tools that improved staff safety. This also helped us respond more quickly to civilians reporting unexploded ordnance on their land. Thanks to that support, we accessed lands in the border areas and cleared ordnance from abandoned farms, paving the way for farmers to cultivate their lands and generate more income for their families.”

Thanks to such clearance operations, between 2015 and 2019 more than 600 farmers were able to grow crops on 6,200 dunums of agricultural land located between 100 and 300 meters from the security fence, increasing food production in the Gaza Strip. The soil in the border area is suitable for growing various foodstuffs, such as wheat, peas, and watermelon, and many local people think the future of Gaza’s agricultural sector depends on being able to cultivate these lands.

After the 2014 conflict, it became apparent just how vulnerable the Gaza Strip was to incidents involving industrial toxic chemicals. At the time, the PCD, the authority responsible for responding to such accidents, lacked both the necessary training and equipment.

Eng. Muhammed Z. Abu Jalambo, the director of the Fire and Rescue Department in the General Directorate of Civil Defence, has been working on identifying and understanding the risks that people face in their daily life and work. He regularly interacts with the ICRC, particularly on how to strengthen his department’s response to accidents. In the beginning, the idea behind the collaboration was to increase disaster preparedness – in particular in relation to industrial toxic chemicals.

“Through the Weapon Contamination Unit, the ICRC gave us the expertise and technical advice necessary to mitigate the risks arising from accidents both for the responders and local people. Our effective response greatly depends on being able to train our staff to stay safe while responding to emergencies in the fastest possible way” says Abu Jalambo.

Setting up the Hazardous Industrial Facilities Protective Scanning pilot project in cooperation with the ICRC was an important step towards enhancing the PCD’s emergency response. By adopting pre-planning and emergency preparedness methodology and identifying, analyzing, and assessing potential risks that hazardous industrial facilities pose to the population and emergency first responders, the PCD turned their approach around from one that was mainly reactive to one that anticipated and was prepared for emergencies.

The PCD’s faster response times and greater ability to deal safely with many risks and protect civilians better bodes well for the future.