Working together to protect health care

Too many lives are being lost that could be saved.

The consequences of violence against health-care workers are much greater than the sum of individual incidents. This is what the ICRC's report, Violent Incidents Affecting the Delivery of Health Care: January 2012 to December 2014, suggests. If medical facilities have to close because of violence against staff, the entire health-care system of a country can be disrupted precisely when it is needed the most. And the consequences often continue to be felt long after the conflict has ended.

Health-care personnel must be able to offer appropriate assistance without obstruction, threat or physical attack; it is impossible to overstate the importance of this. And various measures are needed – some preventive and others to ensure general preparedness – to deal with the threats to the provision of health care; only then can resilient and sustainable health-care systems be built. By bringing people together from very different backgrounds, the Health Care in Danger (HCiD) project has given impetus to the protection of health-care workers and facilities in armed conflicts and other emergencies.

Last December, the UN General Assembly adopted Resolution 69/132, proposed by the Foreign Policy and Global Health initiative. The resolution, which marked a significant advance in securing protection for health workers and facilities, "[s]trongly condemns all attacks on medical and health personnel, their means of transport and equipment, as well as hospitals and other medical facilities, and deplores the long-term consequences of such attacks for the population and health-care systems of the countries concerned."

In addition, the General Assembly adopted other three resolutions that called on States to take measures to end and prevent violence against health workers and to "respect the integrity of medical and health personnel in carrying out their duties in line with their respective professional codes of ethics and scope of practice." 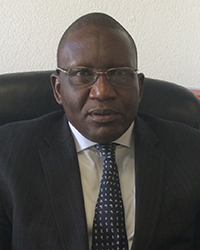 We now have at our disposal important tools and recommendations developed at the international level that reinforce the objectives of the HCiD project. The time has come to put them in place. For example, we need to develop domestic legislation, along the lines indicated in Domestic Normative Frameworks for the Protection of Health Care , in order to implement measures that could save lives and make health-care services safer.

In places throughout the world, the provision of health care is beset with dangers. Now, more than ever, we must work closely together to protect health workers and facilities.

His Excellency, Mr Bassirou Sene
Permanent Representative of the Republic of Senegal to the United Nations Office, Geneva

Since January 2015, Senegal has chaired the Foreign Policy and Global Health Initiative, launched within the context of the UN General Assembly in 2006. The initiative brings together Brazil, France, Indonesia, Norway, Senegal, South Africa and Thailand. Its aim is to make health a central issue of foreign policy and development.