It is hard to exaggerate the toll that the international armed conflict in Ukraine has had on civilians in recent months, on top of eight years of grinding armed conflict in Donbas. Civilians have been killed and injured. Millions of people have poured into neighbouring countries to seek safety. Others have lived much of the last months underground seeking shelter from bombs. Homes, schools, hospitals, and other critical civilian infrastructure have been destroyed. Entire cities have been heavily damaged.

IF YOU ARE IN NEED OF HELP IN RELATION TO THE armed CONFLICT IN UKRAINE, click here FOR INFORMATION AND CONTACT DETAILS. 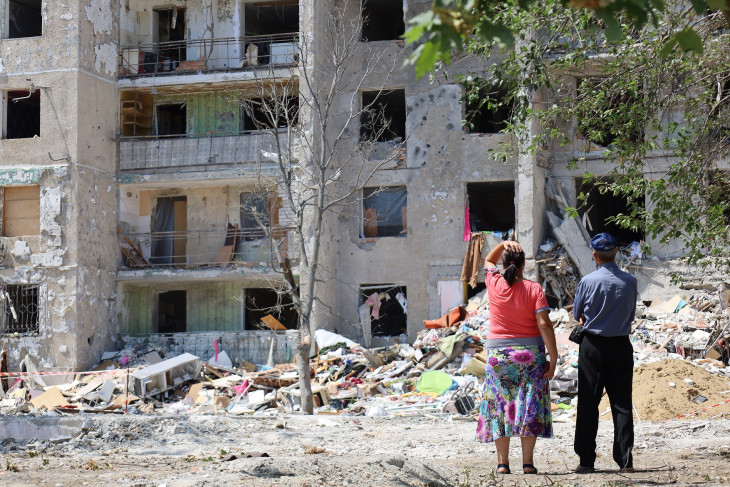 The ICRC has worked in Ukraine since 2014. To meet the rising needs, the ICRC has scaled up its work across the areas directly affected by the hostilities and in neighbouring countries in close coordination with the Ukrainian Red Cross and other Red Cross and Red Crescent partners.

Our staff work in Lviv, Kamieniec Podolski, Vinnytsya, Kyiv, Poltava, Dnipro, Odesa, Sloviansk, Luhansk and Donetsk alongside our partners the Red Cross and Red Crescent Movement to save lives and alleviate suffering of civilians.

To support our regional response, we set up new offices in Moldova, Hungary, Poland and Romania and expanded the operational capacities of our delegation in Russia, which we opened in 1992. We deployed hundreds of staff to support the response, including surgical teams, weapons contaminations experts, and other specialists.

Over the past 6 months, the international armed conflict in Ukraine has left overwhelming suffering, death and destruction.

Staff and volunteers across the #RedCross #RedCrescent Movement have been supporting millions of people.

With the Ukrainian Red Cross and other Red Cross partners, the ICRC is providing emergency assistance to people living in armed conflict zones or those displaced by the fighting. This includes food for over 800,000 people and hygiene items, kitchen sets, household appliances, mattresses, blankets and other essential supplies to over 300,000 internally displaced people. More than 200,000 people received cash assistance to help them cover emergency expenses. In Moldova, the ICRC, together with the Red Cross Society of the Republic of Moldova, delivered food parcels and hygiene kits to 5,000 families, while another 600 families received cash assistance in the Transnistria region.

Today I visited Nova Buda, a village in Ukraine where half the homes have been damaged or destroyed. I met people who've lost their homes homes to violence which leaves physical, emotional and mental scars.
We’re bringing cash assistance so people can begin to rebuild. pic.twitter.com/zTYTLahMMr

Being injured or sick makes people vulnerable, especially when fighting is happening around them.

That's why we helped last week to evacuate injured & sick people from areas affected by fighting in the #Donbas region. pic.twitter.com/AEvvoJl7l7

The ICRC also stepped up its efforts to mitigate disruptions to essential services like water. This includes trucking water to areas affected by supply disruptions, providing water trucks and tanks to local service providers, and helping local water boards with water treatment chemicals and repairs. This work is benefiting millions of people directly affected by the armed conflict. The ICRC has also donated power generators to key facilities like health centres, water-pumping stations, and displacement centres and provided families in armed conflict-affected areas materials to repair their homes.

“We service over 2,000 km of pipes. We have a constant need for equipment”.

Last week, we delivered an excavator to the Kryvyi Rih water company.

Over 9 million people benefit from this. pic.twitter.com/d3DmFXG56S

“I’m still getting glass fragments out of my body”.

We supported Katya & her neighbours with food & essential items. pic.twitter.com/JUq1QuwNng

The ICRC continues to remind the parties to the international armed conflict in Ukraine of their obligations under international humanitarian law, or the laws of war. This is one of ICRC's less visible areas of work, but it is no less constant or vital. It means we speak directly and confidentially with the parties about their responsibility by law to protect civilians and the infrastructure they rely on as well as other protected groups like prisoners of war.

Neutrality and confidentiality are the basis we rely on to build trust.

This means that the only side we take is that of people affected by armed conflict, whoever and wherever they are.

These bilateral, confidential conversations with the sides of the international armed conflict in Ukraine also allowed us to facilitate the evacuation of thousands of civilians from Mariupol and Sumy. It has also allowed us to start visiting some prisoners of war, which we are entitled to do under the Third Geneva Convention, and share news with their families. We continue to speak with the parties about our right to visit all prisoners of war held in relation to the international armed conflict in Ukraine, wherever they are held, as more families await for news from their loved ones.

‘Every human being has the right to go.’

Meet Nicola, one of our paramedics.

Every week, she helps provide safe transport to vulnerable people from Ukraine to Moldova. These are people who can't leave without a bit of extra help – like the elderly or people with disabilities. pic.twitter.com/GZWN4p22vj

The ICRC set up a dedicated bureau of the Central Tracing Agency for the humanitarian crisis in Ukraine in 2022. The CTA Bureau collects, centralizes, and transmits information about the fate and whereabouts of people, both military and civilians deprived of their liberty, who have fallen in the hands of the enemy. Additionally, the CTA Bureau, in coordination with its wider network of ICRC delegations and Red Cross and Red Crescent national societies, helps any families who have been separated due to the armed conflict to find their missing relatives.

The last 6 months has taken a huge toll.

Our teams along with #RedCross #RedCrescent partners have been working across #Ukraine & neighbouring countries to help millions of people in need.

We know there is so much more to do. pic.twitter.com/KTGhXDHIjW

Useful information for people affected by the armed conflict in Ukraine

Our presence in Ukraine

The ICRC has been working in Ukraine since 2014. Our operations in the country are among the ten largest ICRC operations worldwide with a team of over 600 staff members. Working closely with the Ukrainian Red Cross Society, we are increasing our response to the humanitarian needs in Ukraine.

Our support to people includes emergency assistance such as food, water, and other essential items. We also support hospitals and primary healthcare facilities with medical equipment and emergency preparedness. We repair water stations and support households to rehabilitate their damaged homes. We also help families separated by the armed conflict reconnect.