2020: The year of the worst water shortage in Hassakeh, Syria

Throughout the 9 years of conflict, suffering seeped into the lives of the Syrian people through varied spheres, one of which is the disruption of vital services.

In Hassakeh city, in the North East of Syria, 2020 brought with it the reality of water shortage. More than 500,000 people had to contend with disruption of water flow at different intervals throughout the year with the harshest and longest interval in August, in the mid of summer.

Temperatures in summer can reach close to 50 degrees Celsius, and drinking water is crucial for the survival just like hygiene is a priority amidst a pandemic that requires an abundance of water for prevention. The ICRC, with the support of the Syrian Arab Red Crescent, installed 100 water tanks that were filled twice daily to help respond to some of the needs.

Talking to some of the people of Hassakeh at several water tanks locations across the city, they relayed what the water shortage means to them and how it feels:

Haidar, an 11-year-old said: “We are dying, and we need every drop of water,” while Asmahan, a woman in her fifties, commented on the prohibitive costs stating that “the water bottle in the shop is now for 400-500 liras, how can I afford it? Death has become easier for us than this life”.

Even with water tanks freely accessible, the needs were so much higher as emphasized by Mahmoud: “The water tanks cover only a small fraction of the consumption of water, especially during the summer, there needs to be a constant flow. If there is no water, there is no life!”

Water to the residents of Hassakeh city comes from Allouk water station, which has seen frequent disruptions in the past few months. Thankfully today is being repaired with the support of the ICRC and SARC, and water is flowing again.

The ICRC constantly urges all parties to the conflict to protect vital resources crucial for the survival of the civilian population and refrain from any politicization around them. 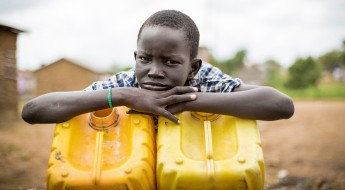