5 myths about the Geneva Conventions as they turn 70 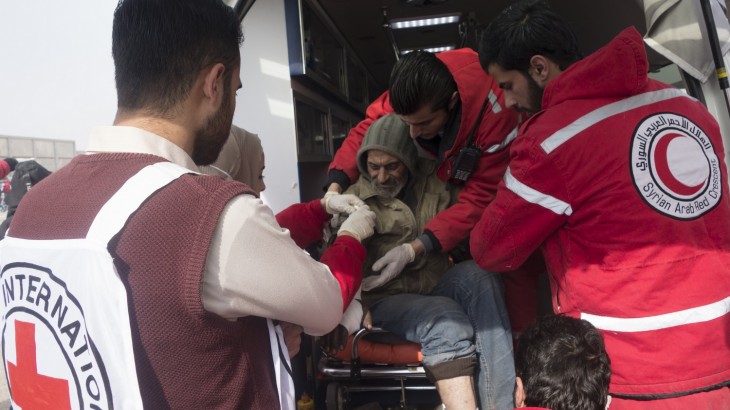 Southeast of the city of Aleppo in 2016. Photo: Tarabishi, Sana

MYTH 1: There are no limits to human suffering in war.

FACT: From Syria to South Sudan, images of conflict and violence saturate social media and the news. With all this information, it can be easy to think that violence during conflict is unlimited. However, the Geneva Conventions stand for the idea that even wars have limits. The rules they contain deal with issues such as the treatment of wounded and sick, the prohibition of torture, the right for families to know the fate of their missing relatives and the requirement to treat prisoners of war humanely.

Every day we see the law in action: when a military takes care in its targeting to not fire on civilian buildings, when a wounded person is allowed through a checkpoint, when a child on the frontlines receives food and other humanitarian aid, and when the living conditions of detainees are improved.

As Nelson Mandela stated about the Geneva Conventions, they "continue to remind us most forcefully of our common obligation to care for each other even, and particularly, in conditions that foster behavior to the contrary." (London, 2003)

MYTH 2: Some groups cannot or should not be engaged with.

FACT: The Geneva Conventions require ICRC to engage with all parties to a conflict. The ICRC talks to around 200 armed groups worldwide linked to our operations or our humanitarian concerns. Our research shows that decentralized, non-state groups are influenced by command structures and that those leaders can be positively influenced to adhere to the Geneva Conventions.

The world today is struggling to balance the security imperatives of States, justice for victims and survivors, legal obligations toward those associated with the enemy, and humanitarian needs.

International humanitarian law can help. It makes no judgement on the motive of fighting. It states that every person who is not or no longer actively participating in the hostilities is entitled to protection and must be treated with humanity. Even the enemy.

MYTH 3: The Geneva Conventions are out of date.

FACT: In 1949, no one was thinking about the need to define an indiscriminate or disproportionate attack in cyberspace. Equally, the authors and signatories had not anticipated that non-international armed conflicts would have multiplied; that armed groups would become so diverse.

While conflicts evolve in nature, likewise the laws of war are not static. Rapidly developing technologies create new frontlines in cyberspace and new technologies such as autonomous weapons systems. The ICRC is concerned about the potential human cost of cyber operations and so is working on understanding and clarifying the basic issues surrounding new technology and weapons, in particular the humanitarian consequences and legal requirements.

MYTH 4: We are unable to act together to solve the threats that face us.

When the world came together after the enormous horrors of the Second World War, the shared resolve to prevent such massive destruction in the future was so strong that the negotiations leading to the creation of the Geneva Conventions lasted only four months. The seemingly impossibly short timeline shows what can be done when States feel compelled to act.

FACT: We are painfully aware that the Geneva Conventions and the laws of war do not stop battlefield horrors. But when international humanitarian law is respected, harm to civilians is drastically reduced.

From treaties relating to the prohibition of anti-personal landmines which have dramatically reduced the use of these weapons and saved thousands of lives, to the Geneva Conventions allowing us to visit over a million detainees last year, international law does make a difference for many people struggling to stay alive in conflict.

As ICRC President Peter Maurer said, "The world has universally agreed that even in times of war humanity must prevail. It is absolute truth that we would be worse off without the Geneva Conventions. But they need better support, more powerful advocates and a spirit of innovation to charter new ways to protect people in today's rapidly changing world."