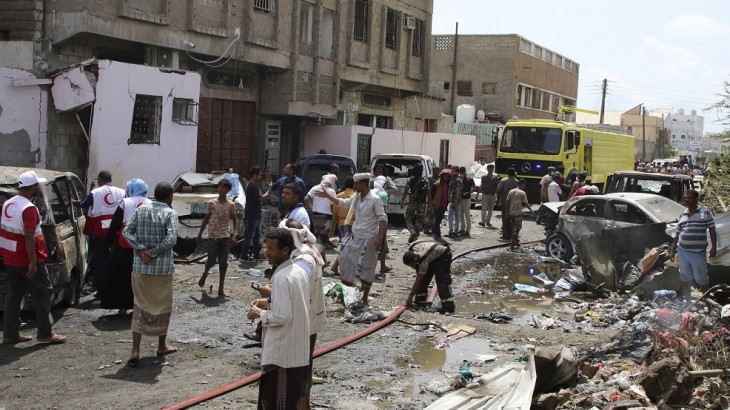 Aden. Staff of the Yemen Red Crescent Society examine the scene of a blast. Photo: ICRC

Geneva/Sanaa (Yemen) Hospitals in the Yemeni city of Aden are struggling and desperately in need of basic supplies, following days of fighting that left scores dead and hundreds injured, according to reports.

Many of those wounded and trapped during the clashes couldn't reach health facilities, with some dying as a result.

An ICRC team on the ground visited two hospitals on Monday and donated surgical kits enough to treat one hundred people, as well as mattresses, stretchers and body bags.

"Fighting went on for 72 hours with heavy weapons, which was very intense during the day. Shots could be heard close to the ICRC office", said Mathias Kempf, head of mission in Aden.

At least 200 thousand people were left without clean water as the situation deteriorated. ICRC liaised with various organizations and authorities to restore this vital basic service at a time when the city was preparing for one of the biggest Islamic holidays of the year, Eid Al Adha, with workplaces closed and families gathering to celebrate.

"When people lose access to services it can be deadly. Many wounded could not reach the hospitals. An ICRC employee was asked for a power connection on behalf of an elderly neighbour who needed it to keep his oxygen running. These are the stories that aren't told when people suffer in silence during conflict", said Kempf.

"What happened to the population in Aden is not an isolated situation but takes place in all parts of Yemen almost daily. Political decisions are necessary to stop the suffering of the population," said Kempf.

This year and until the end of June, 342,000 people received relief assistance of food or cash while 3 million people benefited from the ICRC activities in the field of water and sanitation in Yemen. In the same period, almost 13,000 war-wounded were treated in ICRC-supported hospitals and more than 5000 weapon wounded surgeries were performed in the surgical department of the same hospitals.

For more information on ICRC activities in Yemen, please contact Ruth Hetherington, Public Relations Officer and Spokesperson for Near and Middle East rhetherington@icrc.org /+ 41 79 447 37 26