Afghanistan: 50 per cent increase in children with cerebral palsy treated in Kabul 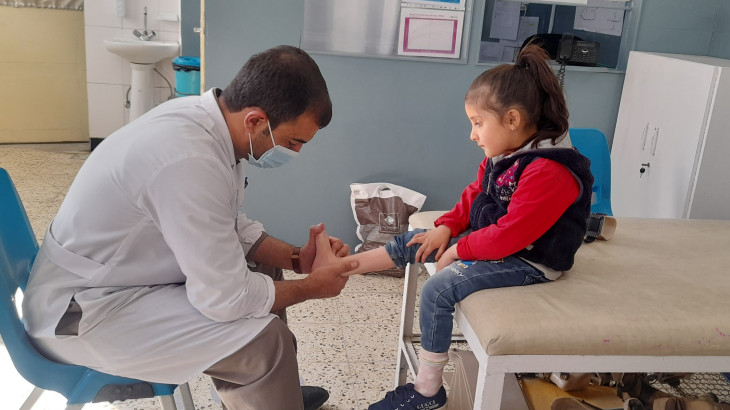 In the first eleven months of 2022, the International Committee of the Red Cross (ICRC) recorded a 50 per cent increase in children treated for cerebral palsy (CP) in Kabul, as compared to the previous year. Against a backdrop of acute food insecurity affecting half the country's population (over 20 million people), the number of new patients treated for cerebral palsy in the ICRC's physical rehabilitation centre in Kabul reached 1673 this year, compared to 1125 for the same period in 2021.

"Poverty, traumas, lack of medical awareness and lack of regular check-ups of the mothers before and during pregnancy are factors that can cause cerebral palsy in babies," explains Dr. Murid Ahmad Rasekh, supervisor of the pediatric department at the ICRC's physical rehabilitation centre in Kabul. Insufficient nutrition for the mother during pregnancy and increased physical activity like farming can also increase the possibility of children being affected. "Even if we cannot directly connect the increased number of patients to the worsening humanitarian situation in Afghanistan, we know that more people are struggling to put food on the table and there is a definite increase in the number of malnutrition cases," says Dr. Rasekh.

The importance of early treatment
Cerebral palsy is an early childhood disorder caused by damage to the developing brain, which as a result affects body movement, muscle control, muscle coordination, muscle tone, reflex, posture, and balance. This disability is a lifelong condition, and it's different for every child. This disorder can occur at three stages: during pregnancy, at birth, or shortly after birth. "The symptoms vary among children, they always experience age-related changes like, weak muscles, decreased balance, difficulties with hearing, speaking, sitting, and walking, as well as epilepsy and visual, speech and intellectual impairments," says Dr. Rasekh. 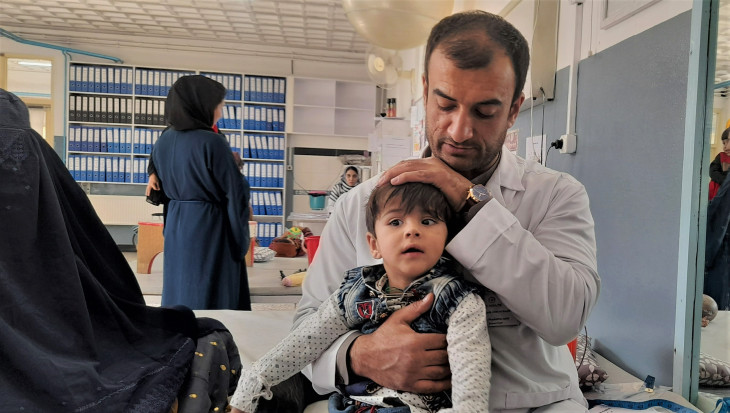 There is no known cure for cerebral palsy and any damage to the brain is irreversible. Patients with cerebral palsy can benefit from supportive treatment, such as physical therapy which is provided free of charge at the seven ICRC rehabilitation centres across Afghanistan. "These treatments improve the quality of life for patients and help them reach their full potential. The earlier the treatment starts, the better the chance to see improvements," says Dr. Rasekh. He goes on to explain that through supportive treatment children with cerebral palsy will be able to take care of their daily needs and become more independent. It will also prevent muscle strain, deformity and bedsores. "Overall, it helps to ease life for patients and their families," says Dr. Rasekh.

Most of the families that seek support at the ICRC's physical rehabilitation centres are not aware of the causes of this condition. "We see families with three or four children who have cerebral palsy. Most of the parents are uneducated and struggle financially. Usually, they do not have enough information about the importance of good nutrition and relative rest for a pregnant mother," says Dr. Rasekh. 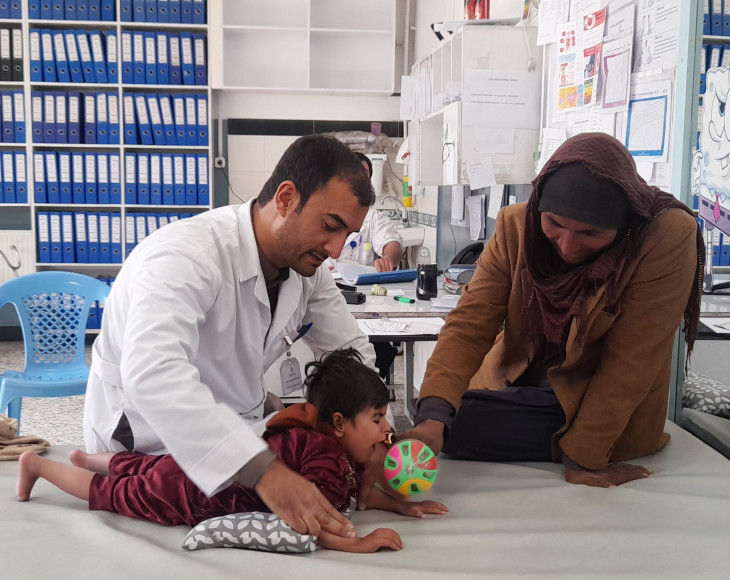 "I had to quit my job to take care of my daughter"
For families, taking care of their children often comes with tremendous challenges. Susan, the mother of one of the patients at the Kabul rehabilitation centre, shares about their journey. "My daughter was one year old when we began her treatment at the centre. She has been under treatment for seven years now. I used to work as a teacher, but I had to resign to take care of my daughter. It is difficult to feed her, dress her or take her around. Her father used to work but he is no longer employed. Our financial situation is not good because we have no source of income. We eat when our relatives help us," she says.

Susan says the physiotherapy exercises and equipment they received at the physical rehabilitation centre have helped her daughter gain some independence. "I wish that one day, my child will be able to eat, sit, go to school and take care of herself," she adds. 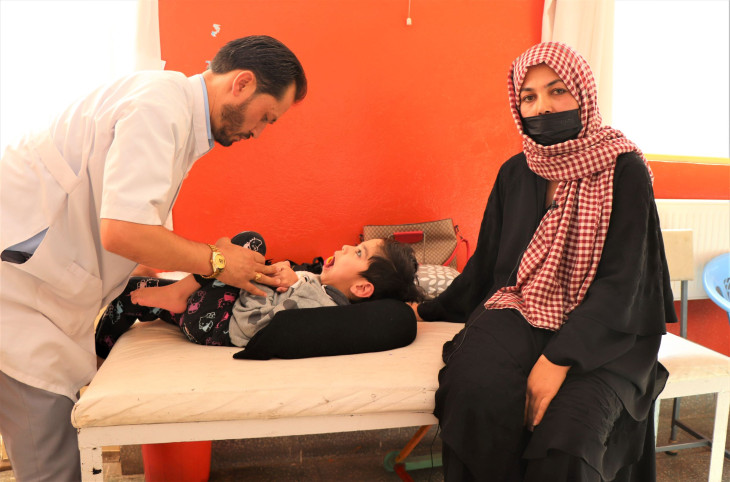 As the economic crisis in Afghanistan affects millions of people, families of children with cerebral palsy struggle to even reach the physical rehabilitation centres. Noorullah, who brought his son from Khost to the centre in Kabul, shares that his son has been receiving treatment for four years. "Thanks to the doctor's advice and regular exercise we can see an improvement and he has recovered about 20 per cent of his capacities," says Noorullah. But transport has been a challenge for them. "I had to borrow money to rent a car to bring my son. We have been asked to come again in 15 days, but I am worried about how to rent a car again," says Noorullah, who is the sole breadwinner for his family. 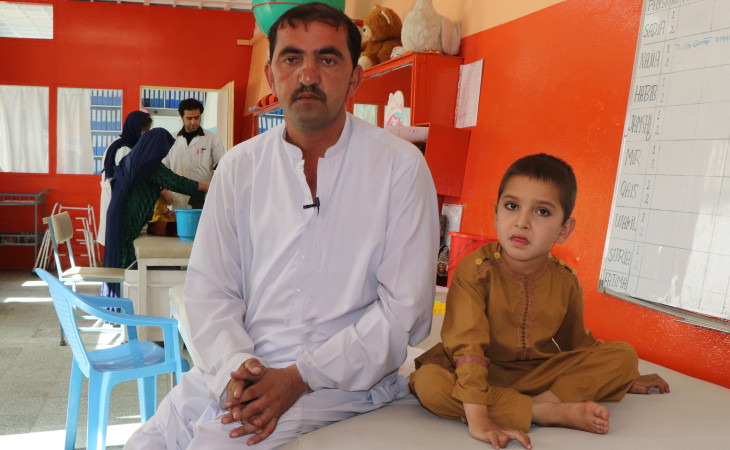 Noorullah and his son wait for their appointment at the rehabilitation centre. (Masoud SAMIMI/ICRC)

More than 1,000 patients with cerebral palsy receive treatment at the physical rehabilitation centre in Kabul each month. This includes more than 300 newly registered patients and about 750 existing patients who are under periodical treatment. Though a high number of patients are being treated at the facilities every month, many more are still in need of proper medical care. As of today, more than 1,200 children with cerebral palsy are on the waiting list of ICRC's physical rehabilitation centres to receive treatment. 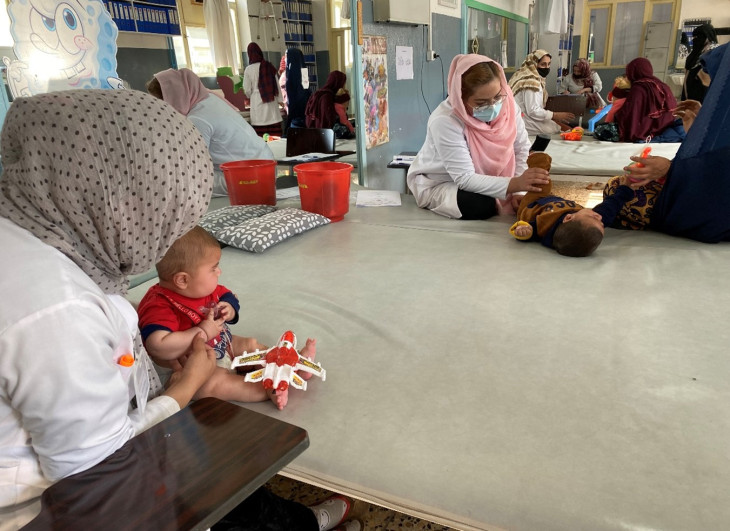 Children who suffer from cerebral palsy are being treated at the physical rehabilitation centre in Kabul. (Murid Ahmad Rasekh/ICRC)