Afghanistan: disability in warzone - a constant fight for survival and dignity 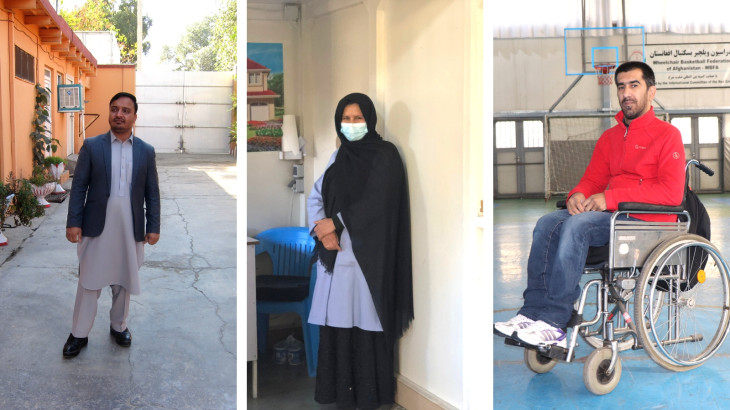 Afghan's lives have been deeply impacted and transformed by over four decades of war. Some people lost a limb due to the conflict or accidents. They saw their mobility and independence reduced, faced the stigma of the society.

What is it like to live with physical disabilities in a warzone? How is it possible to find a job when most of the people struggle to secure an income? What does it feel like to be discriminated by your peers, when already facing the consequences of decades of conflict, economic and humanitarian crises?

We asked those questions to some of our colleagues at the occasion of the International day of people with disabilities. They accepted to share their stories, to show that physical disabilities are not an absolute obstacle and to inspire others that are facing similar situations.

"People disappointed me a lot and I did not know what to do with my life."

Fazel, got infected by Poliomyelitis when he was only three. He faced his first challenges at school. "Children were not interested to play with me, and I was often labeled as "disabled" among my classmates, because I had trouble to walk", remembers Fazel.

As he grew up, he kept suffering from unwanted and inappropriate treatment from his community. Even his close relatives were mocking him for being a disabled person. "My own family was treating me like someone who's not good for anything. They were saying that I was not able to work and earn money like others", Fazel says. "People disappointed me a lot and I did not know what to do with my life."

in 2000, due to economic challenges, Fazel's family was forced to leave Afghanistan and take refuge in Pakistan. To support his Father financially, Fazel started to sell water in bus stops along with his siblings, earning 50 – 60 PKR (0,3 USD) under 40-degree weather. As time passed by, his father, who never stopped trusting in his son, enrolled Fazel in a technical course to learn tailoring. "I never gave up and always found solutions to problems. After years of hardships in Pakistan, I finally returned home to continue my education."

Fazel graduated with a Bachelor's degree in the field of business administration and later he earned his Master's degree in the same field. He received financial support from the ICRC in Nangarhar province to complete his studies. He joined the ICRC in 2009 to work for the social reintegration programme, helping people with disabilities to remain active members of their communities. "One of my proudest moments with the ICRC? The day I met this desperate man, who attempted to drown himself in a river after losing his feet in a roadside mine. I introduced him to the ICRC's social reintegration program. He was provided with a loan to start a business and provide for his family. He got better and we're still close friends today."

Fazel's goal is to continue serving people with disabilities and make them self-sufficient and enable them to access education. "I do not think I am disabled; I am physically disabled, but my heart is not." – Farhadullah Safi/ICRC

"Whatever happens to me, I will always fight for the future of my children"

Weeda lost her right leg when a handcart full of construction material accidently fell on her. After a long journey through rehabilitation, she was fitted with an artificial limb by the ICRC, which helped her regain autonomy and mobility. Despite all her efforts and self-discipline, she faced some particularly difficult moments. "Because of my physical disability, my own family prevented me from continuing my education", explains Weeda. "When I turned seven, my family told me that I did not need to study. They said that someone whose leg has been amputated is not any good for society".

But Weeda never gave up. After getting married, her husband got seriously sick and could not work. She decided to learn tailoring. "I had to find a job to support my family, I was especially concerned for the future of my three children. I did not want them to be uneducated like me". When Weeda lost her husband, she became the only breadwinner of her family. "Whatever happens to me, I will always fight for the future of my children."

"To ensure that my children would not miss anything, I also used to work in a Pistachio production company on top of my tailoring job." As years passed by, Weeda got to know about ICRC's vocational training programs for people with disability. She first enrolled for a tailoring training to strengthen her existing skills and not before long she was offered a full-time position with the ICRC in Herat, where she stills works today.

In parallel, her childhood interest in education never waned, she is now studying English. "Once, I could not even read a piece of paper; this was badly affecting me but now, I am able to read schoolbooks". 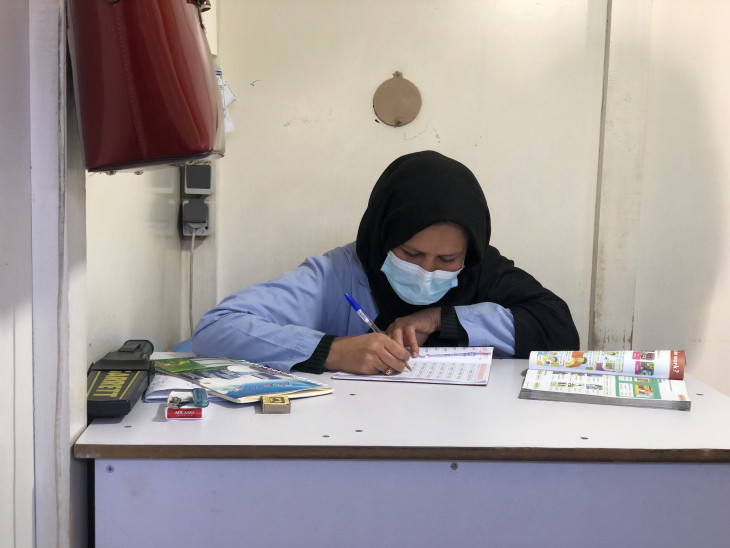 Weeda at her desk at the ICRC physical rehabilitation centre in Herat. – Zabiullah Barmak/ICRC

"Even If I don't get paid, I would come and help other people like me, for this is why I come to my job every day."

In a celebratory gunfire in Kabul many years ago, Khalid got hit with a bullet in his neck while playing with his friends in the street, resulting in losing his lower body's mobility and becoming paralyzed. For him, seeing other children going to school and playing outside was very painful as he could not enjoy his childhood anymore. "My classmates were also coming to our home and were asking me why I was not going to school. I was very disappointed because I could not go with them anymore because of my physical condition."

His family did not have the financial means to afford private tuition. "Without my friends and without access to education, I almost gave up on life", he recalls. "However, one day, I met with the head of social inclusion program at the physical rehabilitation center of the ICRC in Kabul. This man offered me free home tuitions. It completely changed my life."

Khalid was able to graduate from the ICRC's home schooling in 2005. "Without the home-schooling program of the ICRC, people who are using wheelchairs and those not able to go to public or private schools would all be illiterate."

Khalid accepted to share one of his life lessons, that he learned the hard way at a younger age. "I used to repair malfunctioning electronics for my neighbors, most of the time free of charge. One time, one of them, who was a student, asked me: "Khalid, what is the benefit for you to study?". I could not answer this question at that time. But a few years later, the same neighbor came asking for help with his homework. I solved the problem and told him: "This is the benefit of me studying. I want to help people". 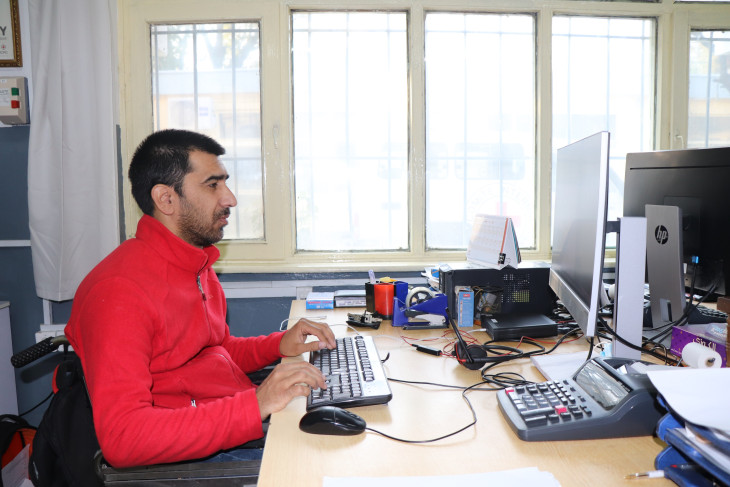 Khalid Sediqi is working in the ICRC physical rehabilitation centre in Kabul for more than a decade. He is also a member of Afghanistan's wheelchair basketball team and he is studying English literature for his bachelor's degree at Kabul university. – Waseem Muhammadi/ICRC

The ICRC runs seven rehabilitation/orthopedic facilities in Kabul, Jalalabad, Gulbahar, Faizabad, Mazar-i-Sharif, Herat, and Lashkar-Gah. It is the ICRC's largest physical rehabilitation program in the world. 86% of the 824 staff (569 males and 143 females) working at the ICRC's PRCs across Afghanistan are former services users. Between January and October 2022, the ICRC assisted over 167,500 people across the country.

The physical rehabilitation of people with disabilities is just the first step in their reintegration into society. Recognizing this, the ICRC's physical rehabilitation programme also works to ensure that their rights and their access to education, employment, microcredit loans, vocational training and sports are protected. Between January and October, around 270 students (boys and girls) benefited from ICRC's homeschooling program and 416 were granted microcredit loans to start a business.