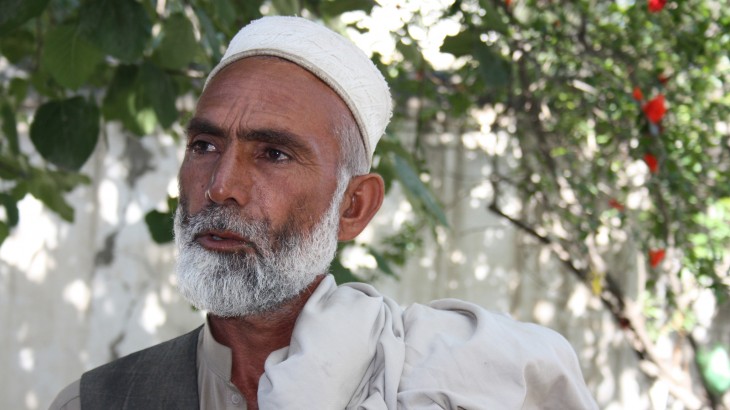 Jalalabad, Afghanistan. Dunia Gul, a farmer from eastern Afghanistan now living with his 22-member family in Achin, received emergency assistance from the ICRC after fighting forced him to flee his village. CC BY-NC-ND / ICRC / Jessica Barry

It has been almost a year since Dunia Gul, a farmer and father of 12 children, fled with his family from Abdul-khil in eastern Afghanistan to Achin Bazaar, an hour and a half by car from Jalalabad. In their haste to escape fighting, the family abandoned their livestock and possessions.

During the summer and autumn of 2015 an estimated 3,000 families fled Abdul-khil and Mamand and settled around Ghani-khil, Achin and other areas close to Jalalabad. Wherever possible they moved in with relatives. Others camped out under the trees. At the time, the ICRC provided enough food, shelter and other emergency supplies to last them a month. They are still there.

With little prospect of further assistance, Dunia Gul and the other displaced men found occasional work as day labourers loading trucks with stones or sand. Others became street vendors. No-one earns more than a pittance. Children no longer go to school.

When Dunia Gul visited the ICRC recently, he looked worn out. "There are 22 people in my family," he said. "We're living in one room in a relative's home. We've used one of the tarpaulins you gave us to create a little shade so that we can sit outside. But it's still very cramped."

"In our culture we're obliged to offer hospitality and help those in need," he went on. "My relatives would never say it's a burden for them, but I know that's how they're feeling inside."

Unemployment is widespread, and there is fierce competition for the scarce day-labouring jobs.

"We'll even work for half pay if it means we get work," said another man from Achin.

As Dunia Gul and his family fled their village, he and one of his sons, who worked for the Afghan Border Police, were arrested by fighters and taken to an improvised prison. "It was dark, and my hands and feet were tied," recalls Mr Gul. Standing up, he demonstrated how he used to shuffle around.

After a month he bribed his way out of prison, but his son was not so lucky. "He was killed before my eyes," the old man says. "There was nothing more they could do to hurt me after that," he added quietly.

"Someone asked for photos of my son. He even offered to pay for them," said Mr Gul, his voice hardening. "How could I accept money for a son who had paid with his life?" he asked bitterly. "I could never use that money to buy food, or for anything else."

Looking at him standing there amidst the pomegranate blossoms, so dignified, so desperate, was heart-rending. But Dunia Gul is only one of the thousands from eastern Afghanistan who have had to flee their villages over the past year.

For all of them, life is at a standstill. But they have not given up hope. "If we could, we'd go back tomorrow, rebuild our houses and restart our lives," the men said as they got ready to return to Achin. "But we must wait. If we were to go home now we'd be killed."