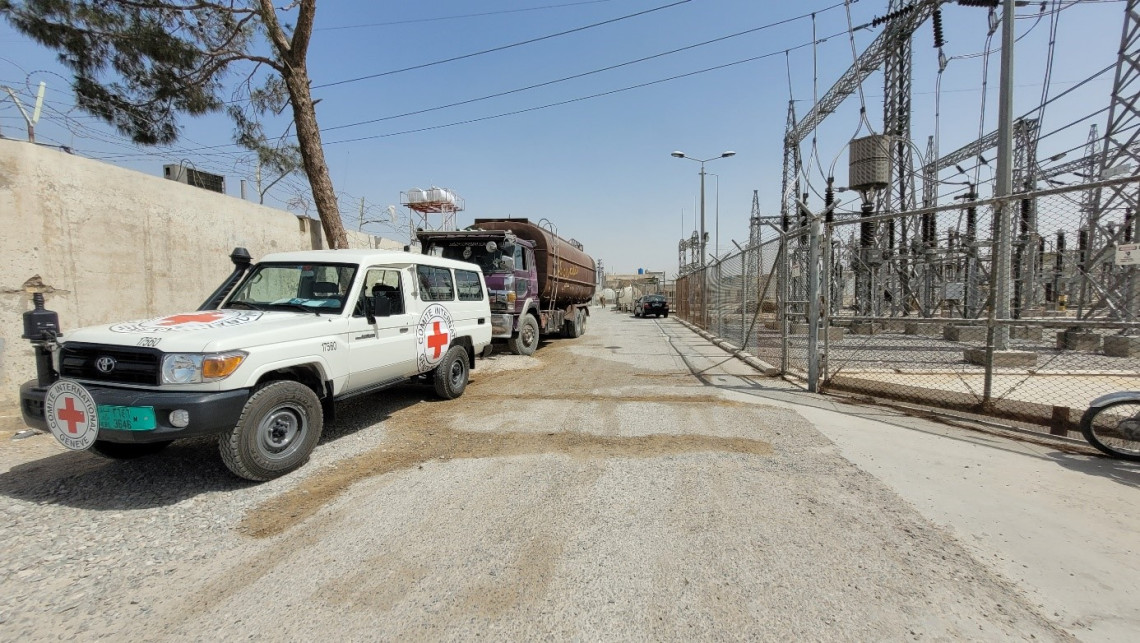 Afghanistan: Preventing electricity shutdown for millions across the country

After decades of conflict and in the midst of a growing humanitarian crisis, Afghanistan is battling to meet the growing domestic needs in terms of electricity. While people of several cities across the country are facing increasing power cuts, many parts of the country still remain unconnected to the national grid, affecting the people’s livelihood and the functioning of essential infrastructure.
Article 11 October 2022 Afghanistan

In Afghanistan, only 22 per cent of the 1,600 megawatts used each year are produced nationally, while the rest is imported from neighbouring countries. To increase domestic production, several key infrastructures are being upgraded, causing disruption in the provision of electricity to communities and essential services.

To ensure people's access to electricity and water, the ICRC has donated since the beginning of the year, more than 1.2 million litres of fuel, over 25,000 litres of engine and transformer oil, and generators spare parts to Afghanistan's electricity supply company and to the urban water supply corporation. These donations have ensured that the water pumps keep running and that there is electricity for two to four hours a day for over 3.8 million residents of Kabul, Balkh, Herat, Kandahar, Helmand, Zabul, Uruzgan, Kunduz, and Farah provinces.

Amongst these people, over 675,000 residents of Kandahar and Lashkargah cities in southern Afghanistan faced a potential month-long power blackout mid-April. The main source of power supply for the cities, the Kajaki hydropower dam, needed to undergo a mandatory upgrade to maximize its power production capacity by 100 megawatts and as such had to go offline.

The ICRC provided more than 400,000 litres of fuel and nearly 13,000 litres of engine and transformer oil along with spare parts, ensuring that the total black-out is averted and a minimum two to three hours of electricity per day were provided to both cities for a total duration of seven weeks.

The ICRC provided fuel to the Kandahar power substation to ensure that residents of Kandahar and Lashkargah cities do not suffer from a complete shutdown of electricity supply. Fawad Ahmad FOZAN/ICRC

The ICRC provided fuel to the Kandahar power substation to ensure that residents of Kandahar and Lashkargah cities do not suffer from a complete shutdown of electricity supply. Fawad Ahmad FOZAN/ICRC

"Without electricity, about 70 per cent of the residents would be unable to access water as they are not connected to the urban water supply network. Also, several vital services such as health facilities that run life-saving equipment and schools faced the possibility of significant difficulties in operating. We provided fuel and spare parts to ensure the optimal performance of generators and help avoid a complete shutdown of electricity. Regular electricity supply should not be a privilege, it is a right. Access to power supply ensures that people have access to water, which is an essential need for daily life," said Sameer Putros, ICRC Water and Habitat Coordinator in Afghanistan.

The ICRC staff in discussion with technical workers during a fuel donation activity. FAWAD AHMAD FOZAN

The ICRC staff in discussion with technical workers during a fuel donation activity. FAWAD AHMAD FOZAN

The decade of conflict and violence, underinvestment in water infrastructure and economic challenges compounded by frozen assets and lack of funding are putting millions of lives at risk in Afghanistan as they struggle to access clean drinking water and reliable energy supply. The ICRC continues supporting the Afghan people by providing the means to access water and energy. However, long term solutions are urgently needed, states and development agencies are encouraged to resume investing in key infrastructure projects to prevent the situation from deteriorating further. As winter is approaching, the need for electricity is becoming even more critical.