Afghanistan: Hospitals are under attack, and children are paying the price 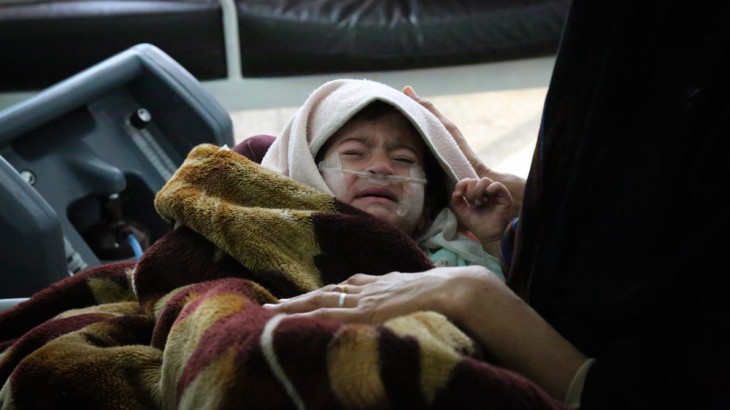 Over the last two years, the Taliban, Afghan forces and other groups have conducted more than 240 attacks on medical facilities, in violation of humanitarian laws. These attacks erode an already extremely fragile health system: They have damaged or destroyed clinics and hospitals and killed or injured countless health professionals. Others have been forced to leave their jobs or flee, and many patients have been afraid to seek care.

Children are among those paying the highest price: the number of casualties is on the rise, as are rates of malnutrition, diarrheal disease and vaccine-preventable diseases such as measles and polio.

An Afghan father described how his 15-year-old son lost both feet after stepping on a mine. He could not get proper care in Kunduz City – the only trauma centre there had been destroyed– so he took a taxi for more than 200 miles to the capital, Kabul. By the time his son received treatment there, it was too late.

"Both of his legs had to get cut off from just below the waist, because the bones were ruined and he had a serious infection," he said. "For a week he was OK, but then from the infection he went into a coma. Ten days later, he died in the hospital."

In another case, a 15-year-old girl suffering from meningitis took a week to reach a hospital but it was too late. She died shortly after getting treatment.

In a country already among the world's most dangerous for aid workers, clinics have become battlegrounds and medical professionals are on the front lines of the conflict.

These are among the brutal stories I heard during a trip to Afghanistan in November where I conducted a research for Watchlist on Children and Armed Conflict. Children and their parents, health workers and humanitarian staff repeatedly told my colleagues and me how these attacks have compromised access to critical health care and devastated children's lives. In a country already among the world's most dangerous for aid workers, clinics have become battlegrounds and medical professionals are on the front lines of the conflict.

Instead of places of healing, clinics and hospitals have become targets in Afghanistan's escalating conflict. Attacks have been so frequent, one health director told us, that many go unreported. Attacks have taken place in at least 20 of the country's 34 provinces, making it difficult, if not impossible, to access health care in many areas.

Warring parties have also forced medical facilities to close, stolen medical supplies and ambulances, and threatened, detained or killed medical personnel. A health vaccinator told us that when the Taliban caught him administering polio vaccines, they warned him they would kill him if they saw him doing that again. He felt threatened again when Islamic State fighters entered the area, and later left his job.

"I have seen with my own eyes, in an area of 100 meters there are three kinds of leaders – the Taliban, IS, and the government," he said. "Our clinic was in the middle of the conflict, so even though it's my job, I had to stop, otherwise I thought either IS or the Taliban would kill me."

Threats and extortion are surprisingly common. In February 2015, a group of unidentified men shot and killed a social mobilizer for UNICEF's polio programme. In August 2016, Taliban members abducted a staff member of a non-governmental organization who was overseeing a polio vaccination effort.

The impact of these systematic assaults on the health-care system and health professionals has been profound. Casualties among children increased by 24 percent from 2015 to 2016, (...)

The impact of these systematic assaults on the health care system and health professionals has been profound. Casualties among children increased by 24% from 2015 to 2016, according to the United Nations Assistance Mission in Afghanistan (UNAMA). More than 1 million of Afghanistan's children suffer from acute malnutrition, an increase of more than 40% since January 2015, according to the World Health Organization (WHO). Communicable diseases are also up: WHO reported 169 measles outbreaks in 2015, a staggering 141% increase from 2014.

At Watchlist on Children and Armed Conflict, we are calling on all parties to immediately stop these attacks. Even during wartime, basic elements of humanity must prevail, and few are more important than ensuring sick and injured children can get medical care.

Read the report : The Impact on Children of Attacks on Health Care in Afghanistan

Articles published in the HCiD newsletter reflect the views of the author alone and not necessarily those of the ICRC.

Health Care in Danger is an initiative of the International Red Cross and Red Crescent Movement to make access to, and delivery of, health care safer in armed conflict or other emergencies. This initiative calls for the respect and protection of health care workers, facilities and vehicles and the implementation of a series of recommendations and practical measures to safeguard health care services and their humanitarian mission. This initiative is supported by a number of partners, individuals and organisations, members of the Health Care in Danger Community of Concern.