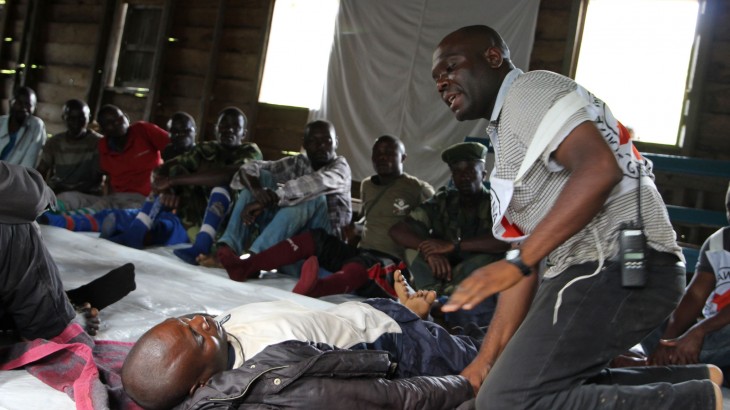 Armed conflict, interethnic clashes and tensions, urban violence in some cities, and finally an outbreak of Ebola make the humanitarian and security context in northeastern Democratic Republic of the Congo (DR Congo) a complex one. Recruitment of minors into armed groups, families separated by conflict, internal displacement, sexual violence, destroyed livelihoods, malnutrition and absence of proper health care are some of the consequences of the conflict and violence that the International Committee of the Red Cross (ICRC) tries to respond to.

This was illustrated during a briefing on the humanitarian situation in DR Congo held by the ICRC's delegation to the African Union in the Ethiopian capital Addis Ababa at a meeting of the Military Attachés Association (MAA) on 2 November. The MAA is composed of defense attachés of the diplomatic missions to the AU (African Union member States as well as partners), who hold monthly meetings to discuss current peace and security issues in Africa.

"We thank the Military Attachés Association for inviting us to hold the briefing on the Red Cross response activities to the humanitarian repercussions of conflict," said Mr Donatien Nkurunziza, the delegate for military armed forces for the ICRC's delegation to the AU and member of the association. "We appreciate this opportunity to create a better understanding of our humanitarian endeavors and how we work and hope that these discussions will lead to stronger dialogue and cooperation between the ICRC and these high-ranked officers."

The briefing was led by the ICRC's Military and Armed Groups (MAG) delegate for DR Congo, Mr Paul Peugnet, who explained that the ICRC maintains a coordinated and integrated multidisciplinary response to tackle the various humanitarian issues in DR Congo and respond to a complex crisis.

The participants were particularly interested in the ways the ICRC manages to maintain dialogue with various state and non-state armed groups, including peacekeeping forces. In this context, Mr Peugnet stressed that the ICRC as a neutral, independent and impartial organization maintains confidential dialogue with all actors including armed groups involved in order to gain access to the communities in need of assistance. He further explained that the ICRC works towards preventing breaches of the Law of War by reminding combatants of the legal rules and suggesting ways to integrate them in their daily operations.

How the ICRC works in DR Congo

A lot of the ICRC's work in DR Congo hinges on confidential bilateral dialogue with armed groups. The ICRC also works reunites families separated by conflict and violence, visits detainees, and provides food and essential household items to displaced people and others in need.

In regards to health, it also provides first aid training, rehabilitates services to people with physical disabilities, supports hospitals, and provides psychological support to victims of sexual violence. The ICRC supports two referral hospitals in eastern provinces with teams and equipment so that people with conflict or violence-related injuries have access to lifesaving care.

The Ebola outbreak is another humanitarian issue the ICRC tries to respond to in cooperation with the DR Congo Red Cross and the International Federation of the Red Cross. The ICRC response focuses on responding to the outbreak in areas affected by conflict and activities aimed at preventing Ebola from entering prisons.

The ICRC at the AU

The ICRC has collaborated with the AU for 25 years around humanitarian issues relating to victims of armed conflict and other situations of violence. The ICRC's delegation in Addis Ababa to the AU collaborates with the various organs of the Commission to raise awareness of and respect for International Humanitarian Law. It cooperates with the Department of Peace and Security, mainly the Peace Support Operations Division, the Defense and Security Division and the Conflict Prevention and Early Warning Division. The ICRC is also an observer to the open sessions of the Peace and Security Council, where it raises humanitarian concerns.

The ICRC collaboration with the AU also extends to the Departments of Political Affairs and Social Affairs; the Office of the Legal Council, the African Committee of Experts on the Rights and Welfare of Children (ACERWC) and the African Commission of Human and People's Rights (ACHPR).