Aleppo: Around 20,000 flee their homes over past three days 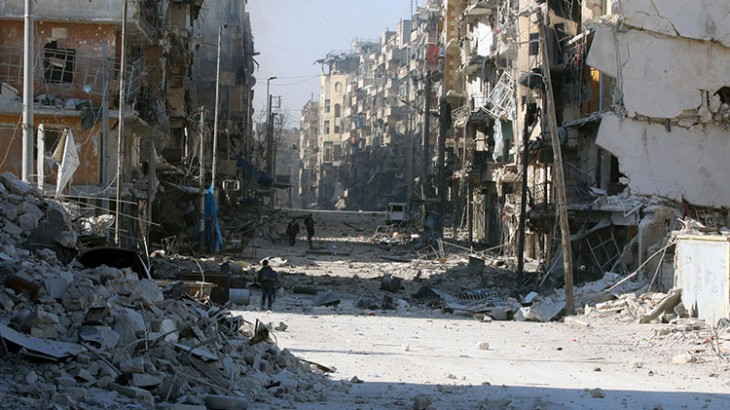 People in Aleppo walk over rubble of damaged buildings, while carrying their belongings. REUTERS / Abdalrhman Ismail

Her teeth were chattering from the cold, her little hands sought warmth in the pockets of her worn out yellow jacket. But she was smiling, playing in the bombed out buildings of Aleppo with her friends.

Yousra is six years old. She has known nothing but war in her short life. She is as old as the war. Like so many others, her family was forced to flee home when heavy clashes erupted in their neighbourhood.

They looked for a safer place, only to end up in a semi-ruined building, struggling to survive. 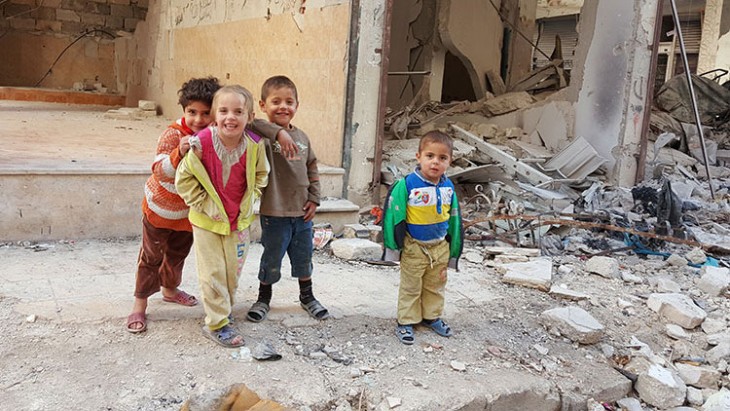 Six-year-old Yousra and her friends find a place amongst the destruction in Aleppo to play. CC BY-NC-ND / ICRC / Sana Tarabishi

It is estimated that around 60,000 people have been forced to leave their homes in Aleppo since August. Twenty thousand fled just over the past 72 hours. Many more thousands left before.

Some people live in shelters, some in mosques, schools, or tents, while others found refuge in unfinished or damaged buildings. And some are hosted by families who are already under great strain. Children and youth, all the more so after their ordeal, desperately need and want to go to school.

So many people have been forced to flee two or three times as the bullets and bombs got closer. The West of Aleppo has seen more than 40,000 people flee areas of active fighting, first in the southwest part of Ramousseh, and later from western parts of the city, such as New Aleppo, Menyan and Al Hamdaniyeh neighbourhoods.

In the East, intensified attacks on the neighbourhoods of Masakan Hananoo, Jabal Badro and Sakhour reportedly led twenty thousand people to flee in different directions in search of a safe heaven. The majority of those who flee are families, including many with infants and young children. The situation in their precarious shelters is made worse for all as winter takes hold and temperatures drop.

"The implications of fleeing home are immense. It's not just a matter of picking a few items and leaving. There's a huge knock-on effect. They need to be guaranteed safe passage and be offered dignified conditions. And they need all the basic necessities such as food, safe drinking water and medical care," said the ICRC's head of delegation in Syria, Marianne Gasser, currently visiting shelters in Aleppo.

Aleppo used to be a city of over two million but with so much fighting and displacement, it is impossible to say with any precision how many people are left today.

Food stocks have gone down. Prices have risen or, as in the East, skyrocketed. The cost of fresh foods such as fruit, vegetables, milk or meat is astronomical: at more than $14, a kilo of green peppers cost ten times more than normal. Even the prices of dry food staples are spiking: a kilo of sugar costs a staggering $21, almost ten times more than the average market price, while at 50 cents, a small bread loaf costs 15 times more.

The ICRC and the SARC do their best to help, helping to improve shelter conditions, food and medical care, wherever possible. The equipping and refurbishing of boreholes have greatly helped in the supply of water, especially when the city's water network is not working. But the needs are massive, and the ongoing fighting and insecurity make aid deliveries and repairs difficult.

"It's vital that all sides respect civilians. Health facilities need to be protected as too many have been damaged and destroyed. There should not be indiscriminate attacks. Human dignity must be respected at all times," said Ms Gasser from the ICRC.

Then there is the less obvious suffering caused by displacement. Children have virtually no chance of regular education. And there is the psychological damage. So many people, living under so much uncertainty and fear for so long. The effects will last for years.

"We stand ready to do more. To organize medical evacuations; to provide more support to the people who stayed behind. But we need more access to people wherever they are," Gasser added. "With no end in sight to the fighting or indeed a wider peace being reached, thousands more civilians face a daily struggle to survive."

The ICRC on the ground in Aleppo: