Tens of millions of the world's most vulnerable people live in increasingly unsafe and impoverished conditions because of armed conflicts and violence that dominate the cities, towns and informal settlements in which they live. This insecurity has forced huge numbers of people to flee their homes, resulting in millions of urban internally displaced people (IDPs). 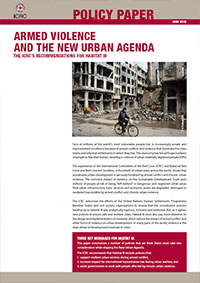 The experience of the International Committee of the Red Cross (ICRC) and National Red Cross and Red Crescent Societies, in hundreds of urban areas across the world, shows that sustainable urban development is seriously hindered by armed conflict and chronic urban violence. The corrosive impact of violence on the Sustainable Development Goals puts millions of people at risk of being "left behind" in dangerous and neglected urban areas. Vital urban infrastructure, basic services and economic assets are degraded, destroyed or rendered inaccessible by armed conflict and chronic urban violence.

The ICRC welcomes the efforts of the United Nations Human Settlements Programme, Member States and civil society organizations to ensure that the consultation process leading up to Habitat III was analytically rigorous, inclusive and extensive. But, as it agrees new policies to ensure safe and resilient cities, Habitat III must also pay more attention to the design and implementation of measures which reduce the impact of armed conflict and other forms of violence on urban development. In many parts of the world, violence is the main driver of development reversals in cities.