Armenia: Living with hope amidst the enduring pain of uncertainty 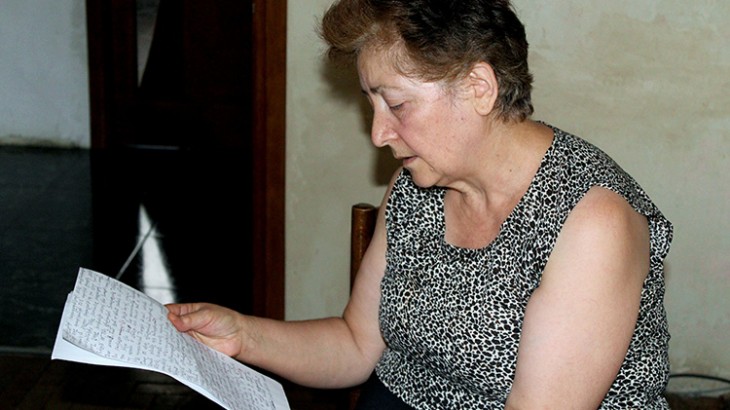 Mrs Tsaghik is mother to Arshak Soghoyan who went missing during his military service in Nagorny Karabakh in the mid 1990s.

Since then, Mrs Tsaghik has never stopped searching for her son. After he went missing, she filed inquiries with all the relevant authorities, including the Ministry of Defense of Armenia. She says that a criminal investigation began when her son first went missing, but the proceedings were not completed and the case was dismissed.

Now Mrs Tsaghik has found herself waiting for her son to knock on the door. She is convinced that he is alive, and that one day he will return.

"I cannot explain the feeling I have as I wait for my son to appear each autumn," she says, in tears.

Mrs Tsaghik bases this expectation on some events that, in her opinion, cannot be mere coincidence.

For instance, during Christmas celebrations one year, the 6-year old granddaughter of some of her friends suddenly stood up and proposed a toast to Arshak, saying that he would return. "He will come back but with some injuries," said the little girl.

From that day on, every year on Christmas Eve, Mrs Tsaghik goes out to the street to listen out for phrases spoken by passing strangers which she interprets as a sign about what has happened Arshak. Each time she hears something new, which sometimes sound like: "I will come" or "I did not manage to come". This year, the first phrase Arshak's mother heard in the street was: "I will not be able to come."

When Arshak was about to leave for his military service, the family organized a farewell party for him. After the party, Arshak approached his mother and told her, "Mum, I will not come back from the army.

She replied, "Only fallen soldiers don't come back."

"Yes, but even if I do mum, it will be strangers who will bring me back, and I will be in uniform," he responded.

It is this conversation and the other signs that she has observed that has lead Arshak's mother to keep believing: one happy autumn day her son will return.

Far-fetched as this may seem to us, Mrs Tsaghik's hope endures. It is not only Mrs. Tsaghik who feel Arshak's absence: her husband Gagik and their two children, Arthur and Anna, have also been waiting for Arshak to come back. Anna often has dreams in which her brother talks to her and says he will return.

The family continues to live with this hope. Mrs. Tsaghik says that although the time has come for her two children to have their own families, they have never overcome the pain of this loss.