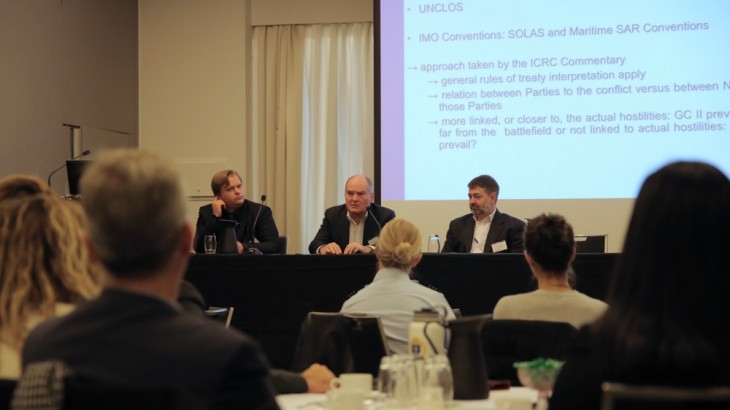 In the years since the Second World War, the international community has been fortunate not to see many conflicts at sea.  However in a world where conflict is rife, with regional maritime border disputes continuing to make headlines, we can't be complacent.

Against this backdrop, the International Committee of the Red Cross last week in Canberra hosted a special briefing exploring 21st century interpretations of the law regulating naval warfare.  The briefing marked the local launch of the updated Commentary on the Second Geneva Convention, a treaty drafted in the wake of the Second World War to regulate the protection of wounded, sick and shipwrecked members of armed forces at sea.

Discussions centred on issues such as: how do defence forces operationalise and put into practice obligations found in the Second Geneva Convention, namely those relating to search and rescue? How is this treaty interpreted and applied in light of other international legal frameworks governing state conduct at sea? What are the responsibilities and restrictions of hospital ships under the Convention?

Military battles on the high seas – involving things like amphibious assault ships and attack submarines – are out of sight, and often out of mind, for most ordinary citizens. The infrequency and invisibility of these sea battles means that there is little understanding of the laws regulating them, even among some naval officers, according to Associate Professor McLaughlin.

The updated commentary on this Convention goes a significant way towards "demystifying what is one of the least understood and analysed of the Geneva Conventions," Dr McLaughlin said.

The updated commentary on the Second Geneva Convention has been launched as part of a broader ICRC project to develop a new set of article-by-article commentaries to the 1949 Geneva Conventions and the 1977 Additional Protocols. The organisers are grateful to the Australian and New Zealand Society of International Law for their support in enabling this event to take place alongside their 25th Annual Conference.