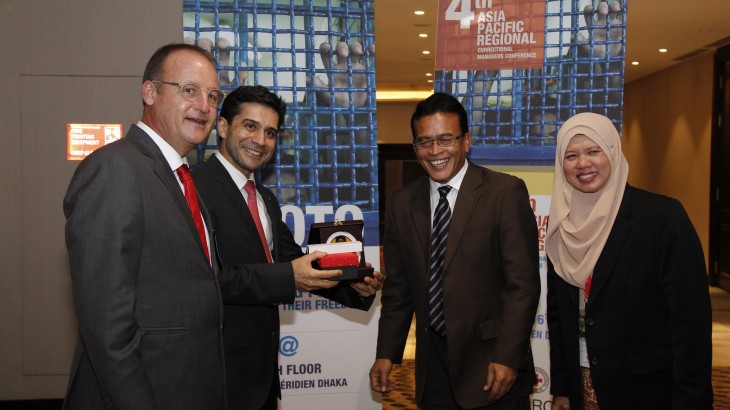 The fourth Asia-Pacific Correctional Managers' Conference (APCM) was held from 16 to 18 May in Dhaka, Bangladesh. Attended by 28 correctional managers from across the region, the conference was organized by the ICRC along with the prison directorate of Bangladesh to provide a platform for discussion on detention-related issues.

Pierre Barras, the head of activities for detainees and separated families from the Kuala Lumpur ICRC, attended the conference with two representatives from the Malaysian Prison Department. Upon his return, he shareds with us an interesting insight into the three-day event.

What was your expectations from the conference?

Having attended the previous APCM conference, I knew what to expect in terms of content and objectives. For me, the conference was an opportunity to hear about the challenges and good practices in the prison systems of the 14 countries that attended the event. It was also a chance to meet the Malaysian participants again and to have in-depth discussions about detention in general. It gave us the opportunity to know each other better. This year's conference lived up to my expectations as the presentations were very informative and highlighted a number of good practices in the region. I was able to establish a constructive dialogue with the representatives from the Malaysian Prison Department and with those of Papua New Guinea, whom I had met during my stay there from 2012 to 2013. The visit to two prisons in Dhaka was also very interesting.

Could you illustrate how the conference theme of "Balancing security and humanitarian needs within prisons" was demonstrated during the event?

Presentations by various countries and the ICRC staff highlighted a number of instances where there could be a disconnect between security and humanitarian needs. Health care was one such example where security concerns can limit a detainee's ability to access timely treatment either within the prison or outside at a hospital. When it comes to prison design and planning, there can be some tension, including over detainees' having access to outside exercise, the movement of detainees around the prison facilities, opportunities to undertake constructive activities and physical security provisions.

How useful was it to bring together so many senior correctional managers to this regional conference?

The conference enabled participants to focus on and talk about common challenges like overcrowding, an issue that prison administrations across the region and in many countries of the world face. Another key reason to bring senior correctional managers together was to help them build networks, establish relationships and share good practices. It was also an opportunity for participants to plan for future study tours and exchange policy ideas, tools and materials. As the ICRC brought representatives from across the region, it was an opportunity to highlight the humanitarian work that the ICRC carries out in the field of detention, be it with inmates or at a systemic level. Participants thanked us and expressed appreciation for the work we do.

In your opinion, how would the discussions of this conference impact or affect the work of correctional managers?

As seen over previous conferences, participants adapt and implement new ideas in their countries once they go back. We have seen changes that were made to prison policies. Examples include the introduction of a new detainees' classification system, the gathering of data to inform decision-makers about new prisons, means to increase access for detainees to exercise in open air and new types of constructive activities being implemented for detainees.

Do you think the ICRC should continue to support a similar conference in 2018?

Yes, I do. I think such a forum is beneficial for all those involved in it. The conference has gotten bigger since it was first organized in the Philippines in 2012. While that one had focused on the issue of overcrowding, the second one in 2015, in Malaysia, spoke about "alternatives to detention". The third one in Sri Lanka, in 2016, discussed issues related to prison design, classification of detainees, health care and strategic planning for change.

What has been the most special part of working for detainees and separated families?

I set up the family visit programme five years ago in Papua New Guinea and the experience has been heartening. Through this programme, family members were allowed to meet those relatives detained and for some of them, this 'reunion' occurred after over ten years of no contact. To be able to meet and hug each other, to cry together and to share food were moments of plenitude and intense happiness, which, though short, are unforgettable. These are the moments that each detained person dreams of.