Childhood memories between playfields and battlefields

The latest escalation which broke out in May 2021 in Gaza and Israel is one of the most intense hostilities that we, the International Committee of the Red Cross (ICRC), have witnessed in the region in years. A significant -and mostly invisible- consequence of the escalation is the impact it has on the mental and psychosocial well-being of the people who live under recurrent cycles of violence. This is especially true for children.
Article 08 July 2021 Israel and the occupied territories

Supporting children’s mental health can be lifesaving in times of conflict and is just as important as stitching up a bleeding wound or having clean water. The ICRC believes that access to mental health during and after the conflict is essential to support the social fabric of societies that have suffered through conflicts.

Moreover, repeated violence puts an additional burden on the population. After hostilities are over, the extent of traumatic experiences that people in general, and children in particular, will have suffered will be enormous. Particularly for those who were injured or lost loved ones, the harrowing memories and grief remain.

In fact, children on both sides will bear the mental consequences of hostilities for many years to come. Drones buzzing, rockets roaring, airstrikes banging and sirens wailing… Children in Israel and Gaza live in constant fear. Among other psychological signs, they suffer from stress, fear, irritable mood, despair, and bedwetting, and they try to avoid images or anything that might bring back memories of the traumatic events and night terrors.

In Gaza, we met Ahd, Bilal, Amal and Rahaf. In southern Israel, we met Shaked, Ayana, Uria, Noga, Ram, Reut, and Alma. They told us how they feel and what they experience during a conflict. 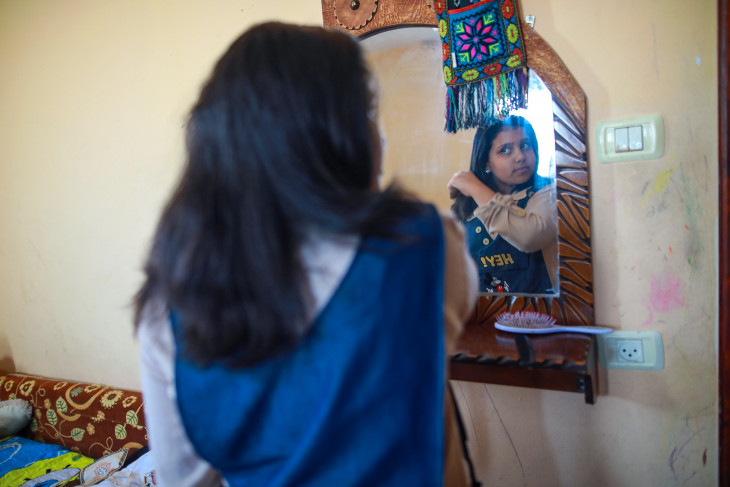 “The memories that stick to my mind are the sounds of airstrikes and ambulances. In the evening and when it’s dark, I’m most afraid,” says Ahd, 11, who lives in Al-Bureij refugee camp.

Terrified by the sound of bombs, Ahd would run to hide in her mother’s lap. Other times, she would look for a safe haven at her grandparents’ house, but she also had to watch them flee their house and seek shelter in a safer place – or at least this was what the family hoped for.

Alma, 10, lives in southern Israel. She also gets stressed whenever she hears rockets. “When a rocket hits, what I fear most is to be alone, with no shelter nearby. I am afraid that I would be away from my home, away from my family,” she says.

What makes the issue of mental wellbeing during conflict so critical is the fact that the consequences of hostilities remain even if the violence ends. Children will not be able to relax or sleep for days, months or even years after a conflict is over.

Bilal, 9.5, from Gaza City, says, “Our neighbor’s house was bombed at six o’clock in the morning. I couldn’t sleep because the bombing was so intense. I cannot forget the scenes of the dead and the injured being pulled out from under the rubble.” 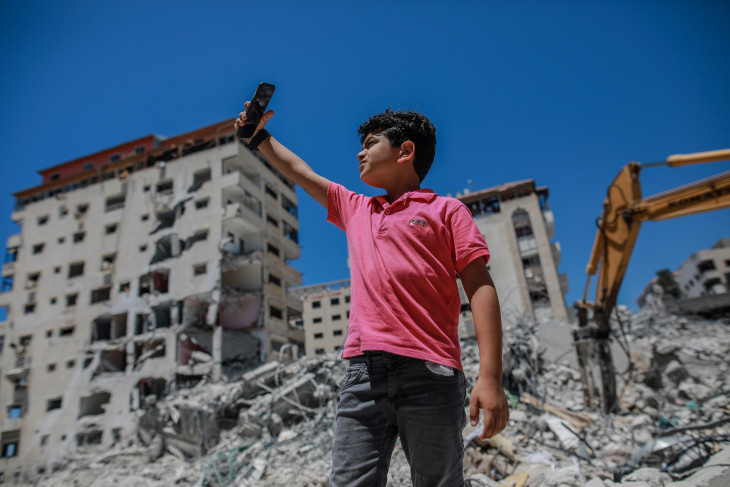 To date, Shaked, 10, from southern Israel is having a hard time processing his feelings. He expresses that he likes to escape reality and forget about the shocking events he has experienced through playing. “I like imaginative play because I don’t have to be in the real world,” he says.

“I was outdoors with my family when the sirens went off. The shelter was far from us. We didn’t have time to hide in it. So, we lied down on the ground…hands on our heads,” says Ram, 10, from southern Israel, describing one of several red-color alerts he has experienced throughout his lifetime. He adds, “when you’re outside, you aren’t covered. This could be very dangerous. People died like this.”

To protect themselves, children in Gaza were forced to hide around the clock. Given the lack of underground shelters in Gaza, Bilal had to hide under a table, waiting to hear sirens of ambulances declare the end of bombardments. “The bombing was close by and very strong. I would sit under the table with my hands on my head. When it was over, my dad would come, try to calm me down, and comfort me.” This is how Bilal conveyed what he had to go through each and every time there was an airstrike nearby.

It’s fair to say that there is an alarming need for mental and psychosocial support for children in Gaza and Israel. They need help to be able to cope with their reality and overcome traumatic experiences. “What I fear most is to be alone, far away from my parents. I’m constantly worried that one of the parties would breach the ceasefire agreement,” Bilal says. For him, feelings of fear and loneliness will linger on. 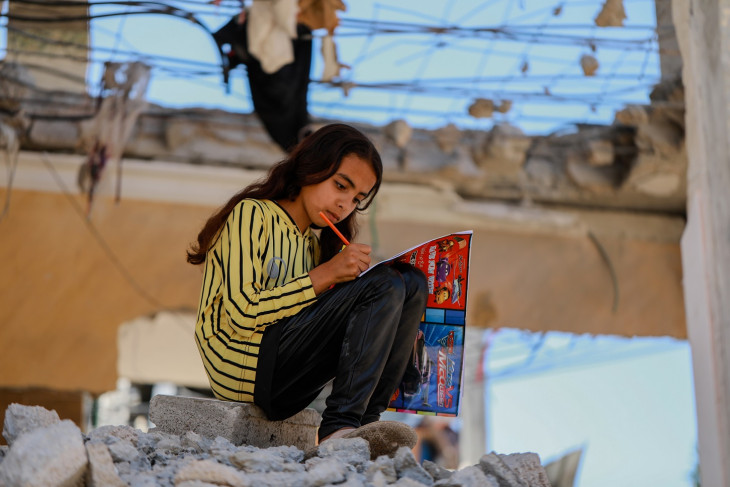 Drones and bombs still echo in Amal’s head too whenever someone in the house shuts the door. Amal, 10, from Beit Hanoun, says, “When I hear the door, I immediately whisper to myself, ‘is the war back? Will we lose our home? Are we going to die?’”.

Uria, 11, from southern Israel, recalls the first red-color alert he experienced. He says, “Suddenly, there was a ‘boom’. I was really scared. My mom told me to run to the shelter…and I simply cried. I didn’t understand what was going on or why there were so many ‘booms’”.

Another challenge people in Israel and Gaza have to face is the possibility of becoming houseless. Losing one’s house in the wake of ongoing hostilities could be horrifying. Children in Gaza told us that, to them, home means family, love, hope, safety, and protection. It’s the place where they were born and raised, the place they hold dearest to their hearts, especially that most of them have been living under siege for almost their entire lives and, therefore, are strongly attached to their houses.

Children who live in conflict zones grow up with a constant sense of potential -and sometimes inevitable- loss. They realize from a very young age that they might lose their most valuable belongings as a consequence of hostilities. “You just start running, without taking anything with you, because that’s the most important thing, safety,” says Ram. 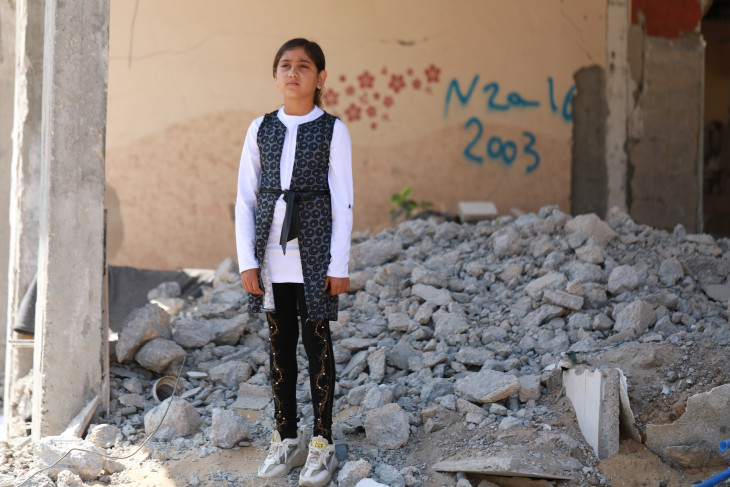 Rahaf, 10, from Beit Hanoun, was devastated to see her bedroom get destroyed by bombing in the latest escalation. “I kept the things that mean a lot to me in a bag near me in case I have to flee the house. Whenever I heard drones approaching, I would clutch onto the bag as hard as I could,” Rahaf says.

“The moment the ceiling came crashing down on my bedroom, I felt like all of my dreams were shattered… I felt like I lost all of my beautiful memories… everything I love was destroyed in that bedroom,” adds Rahaf, choking back her tears.

When Rahaf’s home was destroyed, her entire family had taken shelter in it. Her aunts and uncles had sought refuge at her house because they thought they’d be safer there. As the family fled the house, they separated from one another. Rahaf had to see her mother go one way, as she went the other. The screaming of kids as they ran away from their homes under the bombing still reverberates in Rahaf’s ears. She is still petrified by the idea that one day, she might lose one of her family members or end up alone, without a family or a roof over her head.

Amid all this anger, panic, sadness, loneliness, and fear, those children’s dreams are to become astronauts, dentists, football players, lawyers, artists, and professional swimmers. Children in Gaza dream of waking up one day to find all movement restrictions have been lifted. They want to be able to move freely and to travel the world. On the other side of the border, the children in Israel don’t want to live in war and want to live in peace.

Like other children worldwide, those children like to read, draw, act, play sports, and go out with their family and friends. Despite all the horror, they still have hopes and dreams for a better future.