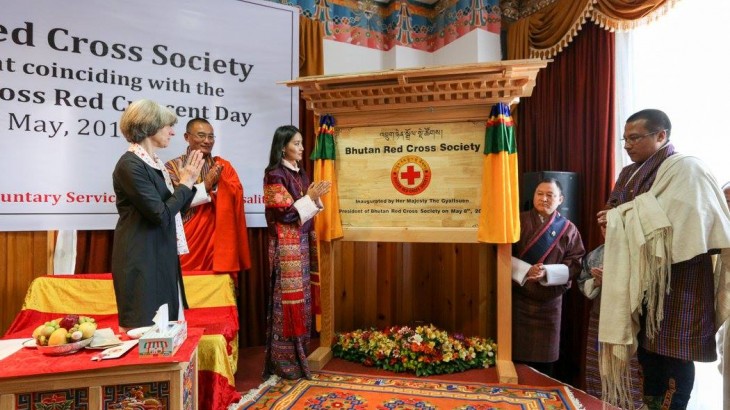 Her Majesty The Gyaltsuen graced the launch of the Bhutan Red Cross Society.

World Red Cross Day 2017 was special for Bhutan this year. In a ceremony steeped in tradition and graced with the presence of Her Majesty The Gyaltsuen, Bhutan Red Cross Society (BRCS) was officially launched on 8 May in Thimphu. Guests at the event included Prime Minister Lyonchhen Tshering Tobgay, Jeremy England, Head of the New Delhi Regional Delegation, Leon Prop, Head of the Regional Office of the IFRC and Annemarie Huber-Hotz, Vice President of the International Federation of Red Cross and Red Crescent.

Her Majesty The Gyaltsuen is also the President of the Bhutan Red Cross Society. Her Majesty addressed the gathering, speaking of BRCS striving to become a network of members and volunteers in communities throughout Bhutan that will provide services in the areas of social inclusion, health and disaster risk management that are complimentary to those of the Royal Government and other organizations. Her Majesty added that the seven Fundamental Principles represent timeless morals and deeply resonate with Bhutan's own guiding philosophy of Gross National Happiness, which places human welfare as the most vital objective of the Royal Government.

Speaking on behalf of the Red Cross Red Crescent Movement, Annemarie Huber-Hotz spoke of the theme for this year's global celebrations, Everywhere for Everyone and the spirit in which BRCS was warmly welcomed into the Movement. She assured BRCS of the Movement's continued support as they implement their roadmap toward recognition.

"Your Society will undoubtedly benefit from the collective knowledge and expertise of the Movement, but be assured that we also look forward to welcoming another partner at the table, adding another global voice and capacity to our Movement and most importantly, we look forward to learning from your Society and from Bhutan," she said. 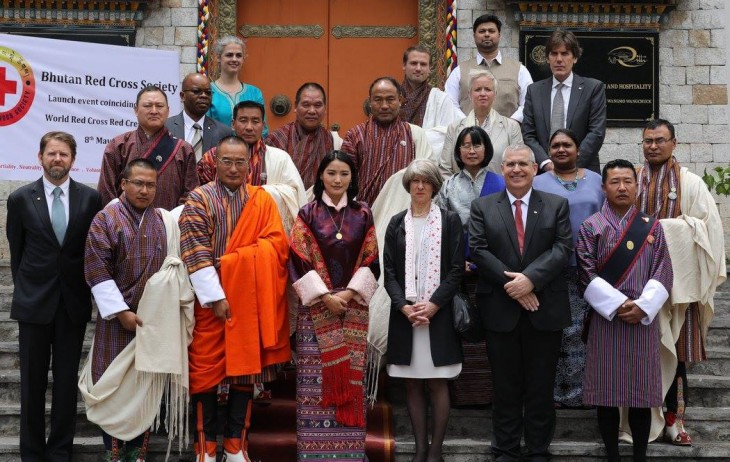 Her Majesty The Gyaltsuen with Prime Minister Lyonchhen Tshering Tobgay, Her Excellency Annemarie Huber-Hotz, the Vice President of IFRC, the regional heads of the IFRC and ICRC, along with members of the Working Committee of the Bhutan Red Cross Society.

The Committee is tasked with a mandate to establish a national society in Bhutan and work towards official recognition by 2020. Speaking at the launch, Ms Wangmo spoke of Bhutan's long connection with the Movement, dating back to the First World War when His Majesty the First King Ugyen Wangchuck had made a contribution of 200,000 ngultrum to the International Red Cross. Bhutan continued to play its part in helping its neighbours cope with the aftermath of disasters – sending aid to Bangladesh in the 1970s, contributing to help victims of the Asian Tsunami in 2004 and sending financial and earthquake relief aid to help victims of the 2015 earthquake in Nepal.

"The spirit of volunteerism has also been very much part of Bhutanese tradition," Ms Wangmo said. "The Bhutanese closely knitted society has been the bedrock to the community vitality where people have always come together to help each other in times of need."

Ms Wangmo went on to explain the two key elements that are distinct to BRCS – its nationwide coverage and the premise upon which the Society will be formed, its volunteers, and membership base which will be built on bottom up approach.

"As an auxiliary to the government, BRCS will be the frontline service provider in disaster management, health promotion, and social services," Ms Wangmo said. "All these services will, however, be delivered through the support of trained volunteers in the communities."

BRCS has already started work on a few local campaigns in the past few months. In conjunction with World Water Day 2017, BRCS initiated a Mass Cleaning Campaign and adoption of the Chubachhu stream, working with Clean Bhutan and National Environment Commission. BRCS will soon embark on pilot projects on First Aid training for taxi drivers and fire safety training.

On its journey towards official recognition by the Movement in the next three years, BRCS has a strategic roadmap in place and looks forward to becoming the 191st national society in 2020.