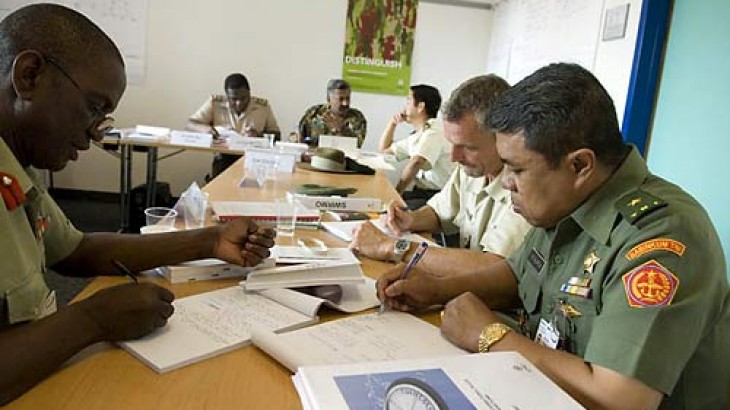 The ICRC delegation to the African Union organized a briefing on ICRC activities in the Lake Chad Basin Region for the Defense Attachés of the Military Attachés Association based in Addis Ababa, on 8 December 2017.

The Military Attachés Association is composed of Defense Attachés, from various diplomatic representances to the AU, both member and partner states, who collaborate with the AU on armed forces related issues, peacekeeping missions and other security issues in the African continent.

The briefing was organized by the ICRC armed and security forces delegate to the AU, Donatien Nkurunziza. The briefing was held by the ICRC Armed Forces delegate for the Lake Chad Basin, Frederico Assoreira Almendra. Mr Almendra briefed the defense attachés on ICRC activities and challenges it faces to conduct its humanitarian activities in the region's conflict areas.

The briefing aimed to create awareness among the defense attachés and their states on how the respect of International Humanitarian Law (alias Law of War or Law of Armed Conflict) is crucial not only to protect life and dignity of civilians, but also to facilitate the work of humanitarian actors who strive to alleviate the suffering. The briefing stressed on the ICRC's activities that are based on neutral, independent, impartial, humanitarian action (NIIHA).

This was the second briefing organized by the delegation to the Military Attachés Association. The first one was a briefing on ICRC activities in South Sudan held in February 2017.