Cambodia: Apart for 2 years, detainee’s family finally gets to meet him 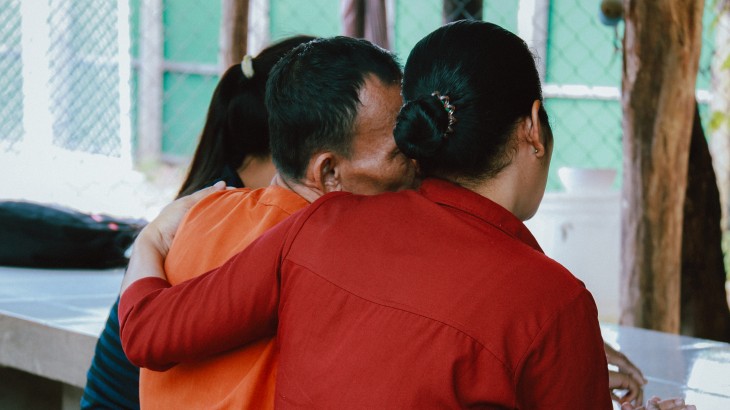 When he told me that he had been sentenced to 20 years in prison, I felt as if my soul had been ripped apart.

It’s been over two years since Champa's husband was detained in the Stung Treng prison, which is more than 400 kilometres from the capital city of Cambodia, Phnom Penh. But it’s only recently that she got to meet him when she visited the detention facility with the help extended by the ICRC as part of its efforts to restore family links.

Champa, 37, has been staying with her mother in an old wooden house on the banks of Tonel Sap Lake in the capital’s Chrang Chamres commune, along with her two daughters, aged 17 and 6. “My job as a hotel staffer hardly covers our daily expenses, which is why I could never make the eight-hour journey to meet my husband. He would call me from the prison and we would get five minutes to talk. But those moments would quickly tick away as hearing his voice would make me very emotional. Meeting him after two years was surreal. Our six-year-old daughter had forgotten his face…” she fights tears.

Champa became the family’s breadwinner when her husband was detained. Before her current employment, she worked as a guard and textile worker in a garment factory. Her elder daughter, though a minor, had to give up studies and get a job.

Getting to meet her husband has been the only bright spot in Champa’s life in the last couple of years. Talking about the importance of these visits, Maramy Chey, the ICRC judicial guarantee field officer who organized the family’s trip to Stung Treng prison, says, “It’s a great way to lower detainees’ stress levels. Family support is a critical source of strength for detainees and helps them to remain positive.”

The ICRC covered the cost of transportation, food and accommodation for Champa and her daughters. “I did not think that meeting him would ever be a possibility,” she says.

In Cambodia, the ICRC launched its family visit programme in 2015 with the aim of restoring links between loved ones who have been separated due to detention. So far, nine families have received support due to the tracing assistance from the Cambodian Red Cross. Efforts are also being made to reunite 12 other families.

As the car halted in front of Stung Treng prison, Champa and her daughters rushed towards the gate. Impatient and excited, Champa could barely sit as she waited for her husband. Eyes welled up with tears when the moment finally arrived and the family held each other in a tight embrace – each moment mattered as the kids finally got to meet their father, and Champa could spend a few minutes with her husband.

“He looked older… I couldn’t find the right words when I saw him. I had so much to tell him,” Champa says, reliving those 30 minutes. She gave her husband pictures of their children that Champa had captured over the two years. “He can see these whenever he misses us,” she says.

“Though it seemed like time flew, I was extremely happy to meet him,” says Champa, with a wide smile reaching her eyes as they fill up with tears again, but this time the tears are of joy and relief.

The name has been changed to protect identity.