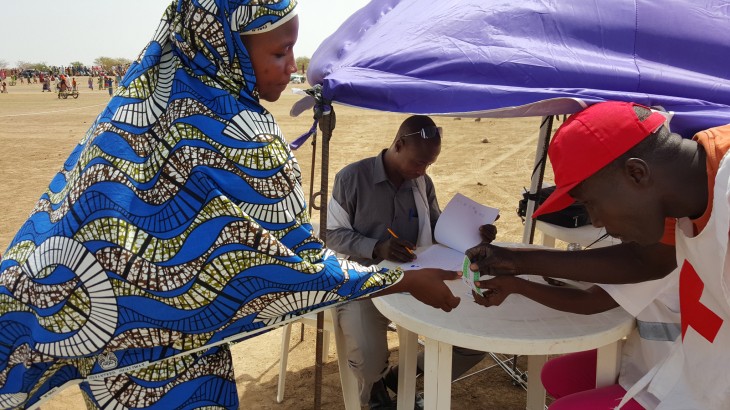 Fadimatou is one of 35,000 displaced persons who received food during this distribution. CC BY-NC-ND / ICRC / Taoffic Touré

Despite repeated clashes in her village, Fadimatou Abbas did not want to leave Fotokol, which lies in Cameroon's Far North region, a few kilometres from the Nigerian border. But in mid-January 2016, a major incident changed her mind.

"One day, in the early hours of the morning, a shell exploded in our courtyard. It wrecked part of our house, and a lot of our belongings were destroyed in the fire," she recalls.

Fearing for her life and that of her family, Fadimatou (25) decided to flee, along with her four children, her husband, and her husband's ten children from a previous marriage. After walking for several days, they reached the town of Maltam, which is currently home to over 6,000 displaced persons. They decided to stay there until it was safe to go home.

But Maltam is also feeling the effects of the conflict. Residents are having to share the little they have with the new arrivals, economic activity has slowed and there are no jobs. The area was already suffering the effects of climate, and the violence has made matters worse. Fadimatou's husband went to look for work in Kousseri, 30 kilometres south of Maltam. He found something, but still has trouble covering his family's needs. The money he can send back barely covers the needs of the children, including the costs of sending them to school.

I didn't think anything would come of it at first. Others had visited us, but none of them ever came back.

Then ICRC staff arrived in Maltam and started registering people displaced by the conflict. That already gave them some hope, although Fadimatou had been sceptical: "I didn't think anything would come of it at first," said Fadimatou. "Others had visited us, but none of them ever came back." But today, she received 75 kg of sorghum, 25 kg of niébé beans, 1 kg of salt, 10 litres of oil and 12 kg of enriched flour. This should go some way towards filling the gap in her food stocks that the conflict has created. "They've promised five distributions like this by the end of the year. I hope they'll keep their word." 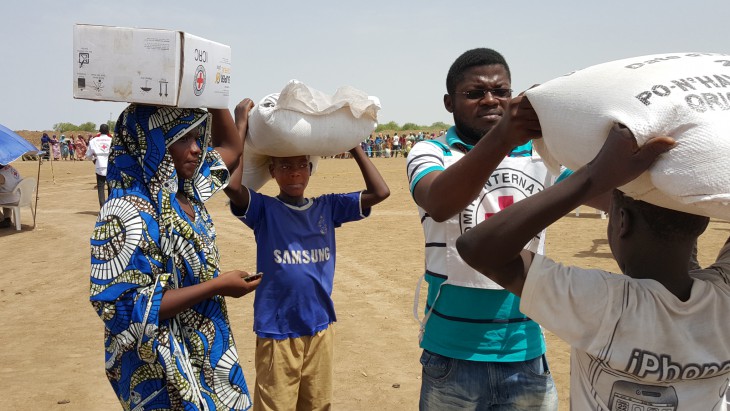 This first distribution has restored a bit of hope to Fadimatou and her children. CC BY-NC-ND / ICRC / Taoffic Touré

In total, the ICRC distributed food to over 35,000 displaced persons and 8,200 residents in four towns and villages in the department of Logone-et-Chari, including Maltam. A few days later, they also received plastic sheeting, sleeping mats, cooking utensils, blankets and feminine hygiene kits.