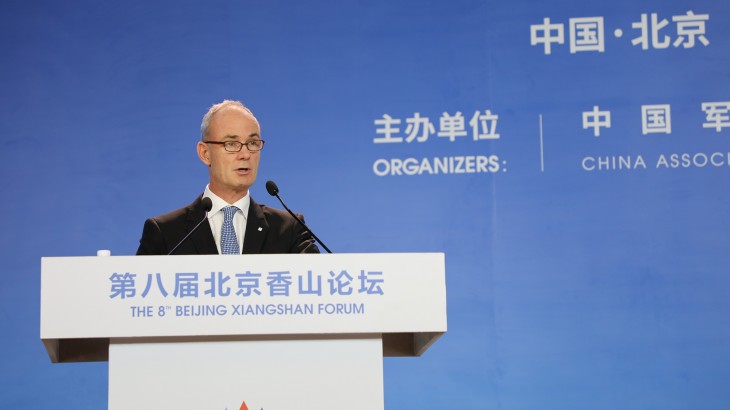 Let me first thank the organizers for inviting the International Committee of the Red Cross (ICRC) to the 8th Beijing Xiangshan Forum. It is an honour to address such a distinguished audience in a plenary session.

Some of you may wonder what the relations are between a humanitarian organization such as the ICRC, armed forces in general and UN Peacekeeping Operations in particular.

The ICRC was created 155 years ago with the purpose of protecting and assisting victims of armed conflicts, and ensuring respect for international humanitarian law (IHL). Ever since, we have worked closely with armed forces (and armed groups) around the world to fulfil this mandate.

Today, the ICRC works in more than 80 countries with close to 18'000 employees engaged in many contexts where UN peacekeepers operate, including Mali, the Central African Republic, the Democratic Republic of Congo, South Sudan and Somalia.

Needless to say, this requires close coordination and dialogue between the ICRC and peacekeeping missions, starting at the level of the Troop Contributing Countries, through our interaction with peacekeeping training centres and, of course, also directly in the field.

More broadly, we have close working relations with armed forces on all continents. These relations take different forms at different levels.

First, at the strategic level, the ICRC participates – for example - in high-level discussions in international fora, such as the Xiangshan Forum today, but also in global expert meetings and bilateral discussions at the highest levels of the military hierarchy. We engage at the level of Minister of Defence or Chief of Defence regarding the inclusion of IHL in military doctrine and defence policies, as well as Standard Operational Procedures and Rules of Engagement.

Second, at the operational level, we engage in dialogue with high-level commands on planning for the use of force, with a view to limiting the impact of military operations on the civilian population and civilian objects. The use of of explosive weapons in populated areas is just one example where we engage on ways to effectively protect civilians. We also have intensive dialogue on the protection of detainees in relation to military operations. Although more challenging, we also strive to engage NSAG about their obligations under IHL and do our utmost to constructively discuss and convince them to change their behaviour to comply with IHL.

And third, at the tactical level, ICRC staff working in conflict zones engage with all armed actors in order to secure access to people in need of protection and assistance. For this to succeed, it is critical that the ICRC is known and accepted as a purely neutral, impartial and independent humanitarian organization. Parties to a conflict need to be confident that we are pursuing a strictly humanitarian agenda. Without this, our work becomes impossible.

Another important aspect of our work with armed forces is awareness-raising and training with regard to IHL (or the laws of armed conflict). We organize international symposia and workshops such as our flagship, annual Senior Workshop on International Regulations on Military Operations. This typically assembles Brigadier Generals and colonels from seventy countries around the world – including senior personnel from the United Nations Department of Peacekeeping Operations (DPKO) to discuss IHL in military operations. In 2014, the workshop took place in Xi'an, China. We work on these issues with the newly established Regional Centre for Military and International Humanitarian Law in Kuala Lumpur, for example. We also facilitate tailored courses at national level that deal not only with IHL, but also with other topics on which we have recognized expertise, such as war surgery or blast trauma care.

Since 2000, the ICRC has significantly stepped up its dialogue with UN peacekeeping operations at both the strategic and field levels in order to ensure a positive contribution to protection of civilians, IHL compliance, and the protection of humanitarian space. We provide regular reality-checks based on our operational presence and proximity to both affected civilians and arms carriers. We regularly interact with all components of UN missions - military, political and humanitarian - in order to remind them of their international legal obligations and to share our priority humanitarian concerns. Without doubt, the multi-faceted challenges in such complex operations cannot be overestimated.

Dialogue also takes place at the level of pre-deployment briefing and training. Last year, the ICRC reached out to more than 25'000 peacekeepers prior to departure, focusing on legal standards but also on humanitarian concerns in the specific areas of deployment. We are in direct contact with Troops and Police Contributing Countries to improve their capacity to integrate the law into military and police doctrine, and to promote fundamental humanitarian principles. Similarly, we provide concrete and effective support to the African Union and its Member States, including to the African Standby Force - for example, by providing capacity building for troops on IHL prior to as well as during missions.

Our dialogue with peacekeepers focuses on four main issues:

The first is that respecting and ensuring respect for the applicable legal framework is essential. As the likelihood of peacekeepers being called upon to use force is high, it is critical that UN forces comply with all relevant international rules, be it humanitarian law or human rights law. In all contexts, senior UN mission personnel must be made aware of the classification of the particular national situation under international law, in order to understand the rights and obligations of all parties. At the same time, UN peacekeeping operations are well-placed to positively influence parties to conflicts to respect humanitarian law.

The second issue is detention by UN peacekeeping missions. Robust peacekeeping operations make it likely that peacekeepers will have to capture, detain and hand individuals over to host State authorities. The ICRC is well placed to understand the operational, legal and policy challenges that detention poses to UN missions. We have closely supported DPKO's ongoing efforts to revise the interim standard operating procedures on detention in UN peacekeeping missions and other contextualized tools. Once adopted, we encourage their circulation and full implementation. Missions should allocate sufficient budgetary and human resources (including training) for situations where they have to arrest, detain, transfer, and hand over detainees. These situations are predictable and should be anticipated.

The third issue is the primary directive of 'Do no harm'. In protecting those at risk, it is crucial that peacekeeping missions keep the do-no-harm principle at the centre of their operations and mindset, and engage communities in a safe and respectful manner. Individual risk assessments and the appointment of civilian personnel to liaise with local communities can mitigate some of these concerns. Affected people need to be meaningfully consulted in order to fully understand their situation, in a culturally-sensitive manner.

Last but not least, complementarity is central to performance. Peacekeeping missions are often in a unique position to prevent violations of IHL, and in some specific cases to start responding to the needs of victims. Good practices collected in the field have confirmed the essential role peacekeepers can play in this regard. The ICRC actively seeks ways of making our efforts complementary in order to maximize the positive impact on affected people. We would recommend that peacekeepers focus on activities where they have the strongest capacity to deliver, such as physical protection. We strongly believe that this dimension should remain an important tool for the protection of civilians.

In sum, Mr Chairman, while the mandate of the ICRC dictates that we must remain independent, it is important to recognize the vast scope for coordination between us and peacekeeping forces in areas where we share common interests. Our dialogue with armed forces in general, and UN peacekeepers in particular, is an extremely important dimension of our collective endeavour to prevent and alleviate human suffering. We look forward to strengthening this dialogue on all levels.

Mr Chairman, I wish to reiterate the ICRC's gratitude to the organizers and the People's Liberation Army for the invitation to address this high-level audience.