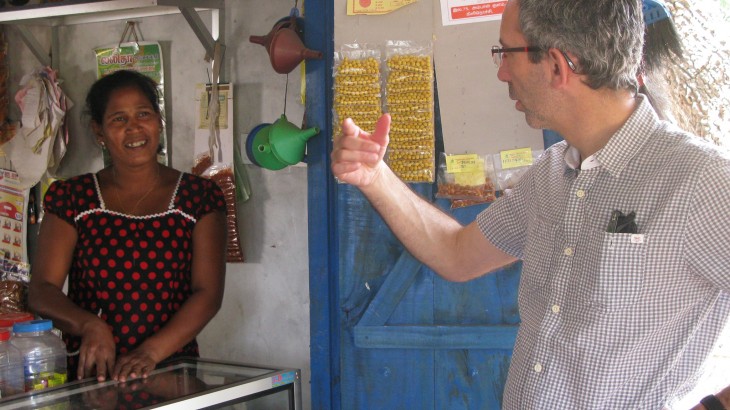 The ICRC's Director of Operations, Dominic Stillhart, recently concluded a five-day visit to Sri Lanka. During his time in the country Mr Stillhart met with a number of senior government officials, including the Prime Minister Ranil Wickremasinghe and the Minister of Foreign Affairs Mangala Samaraweera. In these meetings he reiterated that the organization remains committed to their work in Sri Lanka and to providing assistance to vulnerable individuals, including detainees and families of missing persons.

In this interview, Mr Stillhart shares his perspectives on Sri Lanka and the ICRC's work.

The conflict in Sri Lanka ended in 2009. How does the ICRC's work continue to be relevant and address the local needs?

The ICRC has been responding to remaining humanitarian needs in Sri Lanka since the end of the conflict. We provided cash grants to vulnerable individuals from former conflict areas, such as households headed by women and people who were disabled due to the conflict or had required rehabilitation. These grants, distributed from 2011, enabled individuals to either start or consolidate an activity generating an income.

For people who were displaced and now returning to settle in former conflict areas, the ICRC is restoring pipe networks, constructing wells and distributing clay water filters. The construction of overhead water tanks and toilets in schools in these areas means local children will have access to improved facilities. The ICRC will continue to support these vulnerable individuals, as long as their needs remain.

In addition, the ICRC firmly believes that proper management of the dead is a key aspect of humanitarian response and is therefore helping develop local capacity to identify human remains. Support provided by the organization includes to the College of Forensic Pathologists, assisting with the set-up of a Diploma in Forensic Anthropology and Archaeology. The ICRC has also offered assistance to create guidelines on the management of human remains and deliver training on the management of mass graves.

What support can the ICRC give to the Sri Lankan authorities and families of missing persons?

My visit to Sri Lanka was an opportunity to renew the ICRC's commitment to support the authorities, as they go through the process of clarifying the fate of missing persons. While acknowledging the importance of an accountability process, the need for families to know the fate and whereabouts of their loved ones is no less important and should not be forgotten.

During the meetings in Sri Lanka, a proposal to set up an independent process to clarify the fate of missing persons was discussed and was positively received by government officials. This is a long-term effort that requires sustained political commitment.

In order to best understand all the humanitarian needs of the families of missing persons, the ICRC is currently undertaking an assessment in Sri Lanka that involves a number of families. The organization aims to meet 375 families in total, including those of missing soldiers and policemen. To date, the ICRC has already met with 177 families in 12 districts covering five provinces (Western, South, North, East and Central). 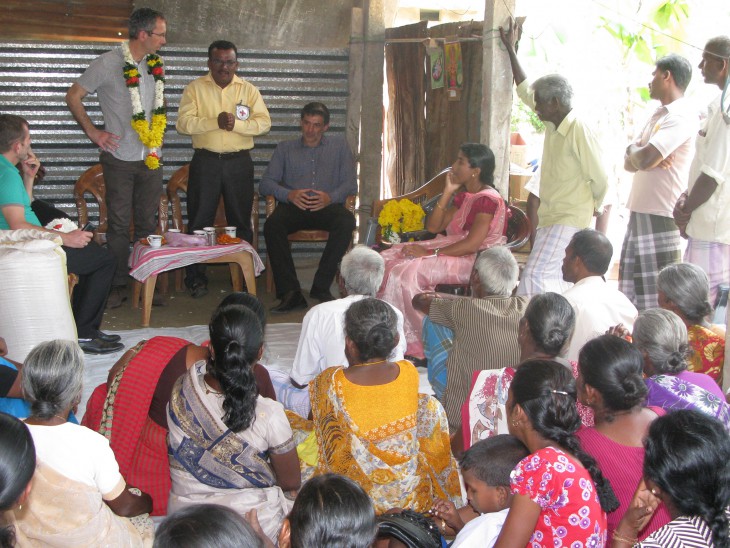 Dominic addresses beneficiaries of the Community Based Livelihood Support Programme in Kilinochchi, and listens to what they have to say.

These families were clear on their requirements of the authorities – to know the fate and whereabouts of their missing relative and the ongoing economic hardship they face. The families also discussed other social, psychological, legal and administrative problems that affect their daily lives and their wish to have their suffering recognized.

In addition, the assessment is currently exploring all the available resources and aims to identify gaps in the services offered to these families. This process should be completed by June 2015, with the final report to be shared with the government (on a confidential basis) before the end of the year. The ICRC hopes the overall findings will assist the government in addressing the specific needs of the families of the missing, as well as to help the ICRC design its humanitarian programmes for these families.

The ICRC has been visiting places of detention in Sri Lanka since 1989. How has its work in this area evolved over the years?

The ICRC initially began visiting places of detention to support the authorities in providing adequate conditions and treatment to people detained due to previous conflict. Over time the beneficiaries of the visits have expanded and now include all detainees.

In March this year, the ICRC supported the Ministry of Justice to set up a taskforce of relevant stakeholders, whose role is to address the judicial and legal causes resulting from overcrowding in prisons in Sri Lanka. For the ICRC, this initiative signals that the government is taking the issue of overcrowding seriously. Going forward, the ICRC will provide technical and administrative support to this taskforce.

What are your thoughts from your visit to Sri Lanka?

I had the opportunity to travel to Kilinochchi and Mullaitivu where I was impressed by the reconstruction of roads, schools, hospitals and houses. However, when I spoke with local beneficiaries it became evident that their households are still struggling. There are needs that remain to be addressed.