Cluster munitions: For civilians, consequences are severe and long-lasting

Ninth Meeting of States Parties to the Convention on Cluster Munitions 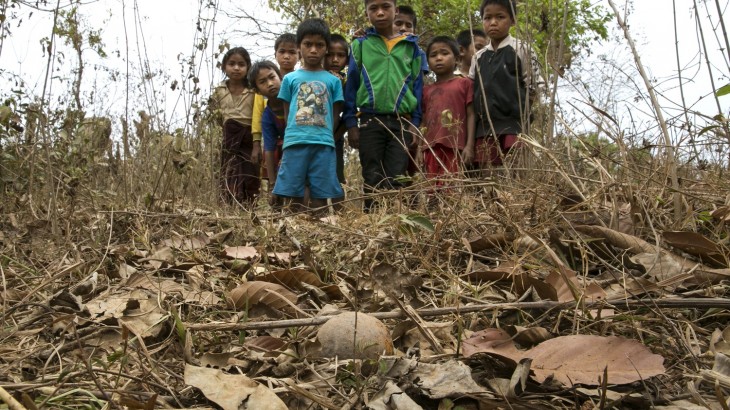 Toumlan district, Laos. Children are looking at an unexploded cluster sub-munition that was found close to their village. CC BY-NC-ND / ICRC / Bronstein Paula

Statement by Dr Gilles Carbonnier, vice-president of the International Committee of the Red Cross

The humanitarian consequences of cluster munitions for civilians have been severe and long-lasting. Not only have they killed and injured large numbers of people, they have also had significant socio-economic impact that continues to be felt long after active hostilities have ended.

The ICRC has witnessed the effects of cluster munition remnants in its operations around the world - particularly in Asia, Europe and the Middle-East. In Iraq, where I used to work as an ICRC delegate, nearly 40 years of successive armed conflicts left the country riddled with unexploded weapons, including cluster munitions. These weapons that are said to "keep on killing" continue to threaten civilians' lives and limbs every year. To give just one example, I recently heard the story of Baneen, a 9-year-old girl living in Najaf, who was seriously injured by an unexploded munition when returning from a family picnic in her father's car. This particular munition was from the time of the Gulf War, almost 30 years ago. And this is just one example among countless others.

It was this high human cost of the use of cluster munitions that prompted States, the United Nations, the ICRC and civil society organizations to join together in calling for a comprehensive ban of these weapons, leading to the adoption of the Convention on Cluster Munitions in 2008. This is the first international treaty to prohibit the use, stockpiling, production and transfer of cluster munitions. It also serves as a comprehensive humanitarian action plan that commits States to clear cluster munitions and the remnants left on the ground, assist victims and their families, and raise awareness among the civilian population of the dangers of these weapons, among others.

The Convention has, in many ways, been a remarkable success since its entry into force in 2010. For one, there has been no reported or alleged use of cluster munitions by States Parties since 2008. Their use by States not party is rare and stigmatized by the international community. Cluster munitions are unacceptable weapons which should never be used by any party in any armed conflict.

However, while we welcome these achievements, significant challenges persist in achieving the goal of a world free of cluster munitions. One serious concern relates to the reported new use of cluster munitions in the past year on the territory of States not party to the Convention. This has again highlighted the urgency of universal adherence. Although three States have joined the Convention since the last Meeting of States Parties, bringing the total number to 106, there has nevertheless been a significant slowdown. This is worrying.

We call on the 14 signatories to ratify the Convention as soon as possible. And we urge all States Parties to step up their efforts in promoting the universalization of the Convention. We reiterate the goal of 130 States Parties joining by 2020, as set out in the Dubrovnik Action Plan.

The ICRC will continue to contribute to this endeavor over the next year, in the lead up to the second Review Conference in 2020. In particular, we will continue to engage in bilateral dialogue with States not yet party. We will also be holding various regional and national events to promote universalization and implementation of IHL treaties - for example regional IHL seminars in South Asia and West Africa. President Peter Maurer and myself are personally committed to promoting universal adherence to the Convention.

There are other challenges and concerns too, regarding stockpile destruction, clearance, victim assistance, and sustainability of resources. The coming days will provide an opportunity to discuss these and how they may be addressed. For example, this meeting will review, for the first time, requests for extensions of stockpile destruction and clearance deadlines. The Convention community should work to ensure that treaty obligations are implemented by all States Parties in good faith and without undue delay.

The ICRC for its part, together with National Red Cross and Red Crescent Societies, has been undertaking specific initiatives to prevent and address the humanitarian consequences of cluster munitions and will continue to do so. These activities include awareness-raising and risk mitigation in 42 contexts, as well as physical rehabilitation and support for the social and economic inclusion of survivors in 30 contexts.

In closing, we call on all stakeholders to capitalize on the positive momentum of this meeting and make concerted efforts to promote universal adherence to the Convention; to put words into action to protect civilians and their communities from the indiscriminate harm caused by cluster munitions. We owe it to young Baneen in Iraq, and the countless others, like her, at risk of death or disability from these unacceptable weapons.