“In death, people should still be treated with dignity”

What is it like to be a forensic anthropologist in Colombia? 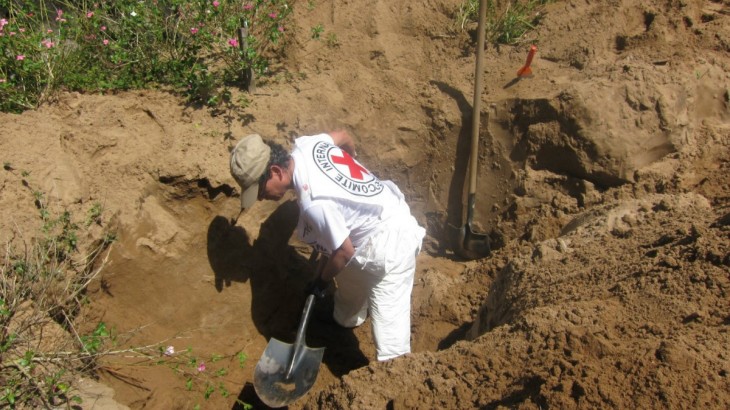 Death is not something you ever get used to. At least that's what Ángel Medina believes. He has been working as a forensic anthropologist for the ICRC in Colombia for over four years, sometimes in very remote or dangerous parts of the country.

Although his work brings him face-to-face with a world of suffering, it is also extremely rewarding to recover human remains and succeed in identifying some of them.

No matter how many cases we handle, we'll never get complacent. There's no better feeling than knowing that you helped a family assert their right to know because you found the remains of their missing loved one

Ángel previously worked in Kosovo and Chile and returned to Colombia during the most complex period of the country's armed conflict. And yet, when he began studying to become a forensic anthropologist, it seemed far-fetched that he would ever be able to put his skills into practice. At that time there were very few forensic specialists working on analysing mortal remains in Colombia.

"The conflict and violence were what drove many more people to train as anthropologists, in preparation for what the country is going through now – thousands of people were disappeared by armed groups and now we need to know how they died and who they were," he says.

But collecting mortal remains in places where conflict is still raging can be dangerous. "Sometimes I've had to work in the middle of minefields, or my team and I have been caught in crossfire."

The armed conflict in Colombia claimed many lives, but for Ángel that does not excuse the conditions in which some victims were buried in cemeteries. Either they cannot now be identified (because their remains are poorly preserved) or the records do not reflect the reality of who is buried there. "It shows a lack of care towards the victims. They already suffered a violent death; they shouldn't be subjected to further degrading treatment. It is important to remember that in death, people should still be treated with dignity."

← BACK TO ICRC COLOMBIA