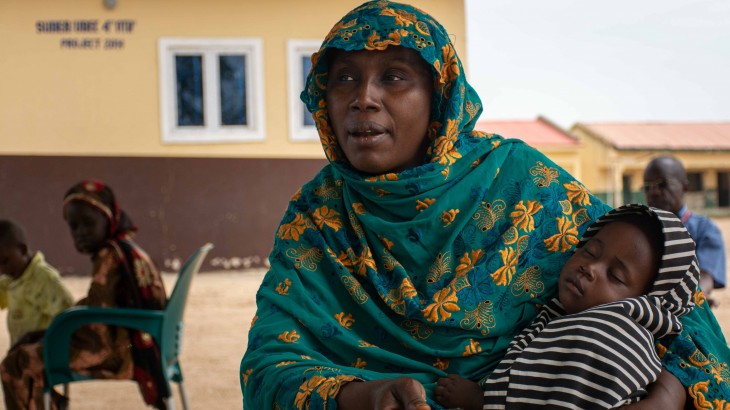 Sitting in the cool shade of a towering Neem tree, Hauwa Mohammed cradles her sleeping granddaughter.

They are part of a small crowd, mostly women and children, patiently waiting to see the doctor.

"We're not sure what's wrong with her, she's sick, so the doctor is going to check her," said Hauwa, speaking about her two-year-old grandchild.

Upon first sight, the Shokwari health centre seems rudimentary at best. It consists of four tents tucked away in the corner of a school yard in the bustling Nigerian city of Maiduguri.

However, before it opened in November 2018, people in this community would have to make the long and costly journey to the city's main hospital to get basic health care.

"The hospital is overcrowded, sometimes you would end up sleeping on the floor before you could get attention," said Hauwa. "And you have to pay for everything – for the appointment and the medicine. Here we get free treatment and it's easy to get here."

A stone's throw away from where Hauwa is sat, a concrete shell of a building stands vacant and unfinished. 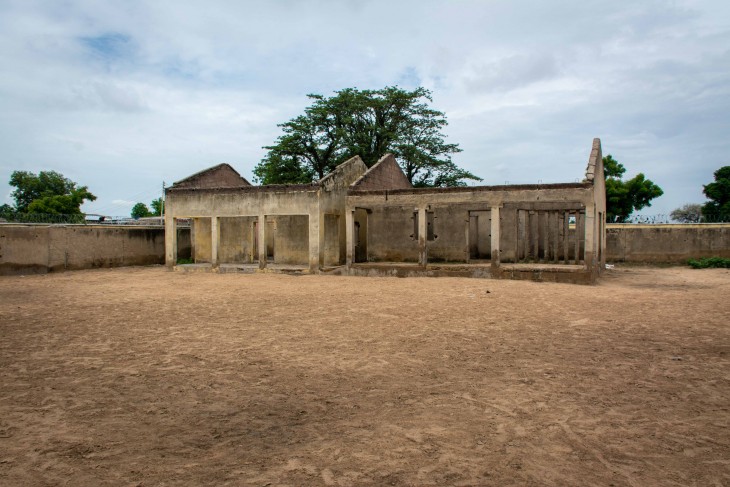 It was supposed to be a new health facility. But when conflict came to town, construction stopped and the building was damaged.

Today it embodies one of the burning issues in this part of north-east Nigeria: health care, or rather, people's lack of access to health care.

The Shokwari health centre may have improved people's access to medical care in this corner of Maiduguri, but the bigger picture in north-east Nigeria is deeply worrying.

Borno state has been mired in conflict for 10 years now and only half of its 700 health-care facilities are functioning.

In January, an ICRC-supported facility in Rann was burnt down. Health centres in Sabon Gari and Damboa have also been attacked. Last year, two ICRC midwives were abducted and killed.

Medical professionals and facilities are protected under international humanitarian law, meaning they should not be attacked. When they are targeted, it is civilians who suffer.

"Treatable illnesses such as malaria become deadly as people simply can't get medical care due to the hostilities," said Samuel Okech, an ICRC health delegate in Maiduguri.

Child-birth has also become a dangerous undertaking. North-east Nigeria has the worst maternal mortality rate in the country with more than 1,500 deaths for every 100,000 live births.

The ICRC supports five government primary health centres in Borno state. They have a combined catchment area of more than half a million people.

"The health centres are very overstretched and it's difficult for them to recruit medical staff," said Okech.

"Medical professionals are simply not willing to go work in outlying areas because of the insecurity. And who can blame them?

"When health facilities and personnel are attacked with such flagrant disregard, it's no exaggeration to say that lives are lost as a direct consequence.

"All parties to the conflict must spare medical facilities and personnel. Everyone has a right to health care under international humanitarian law."

The Shokwari health centre, which is supported by the ICRC, offers primary health care for around 20,000 people, both the local population and those made homeless by conflict.

Around 1.4 million people (IOM) in Borno state have had to leave their homes due to fighting.

Maiduguri has absorbed more than a quarter of a million people (IOM). They have largely settled into camps dotted around the city, or are living within host communities.

"When people first started arriving you could only feel sympathy for them," recalled Hauwa.

"Children had no clothes, so we gave whatever clothes we could to them. We gave them land so they could make shelter, and any food we could spare." 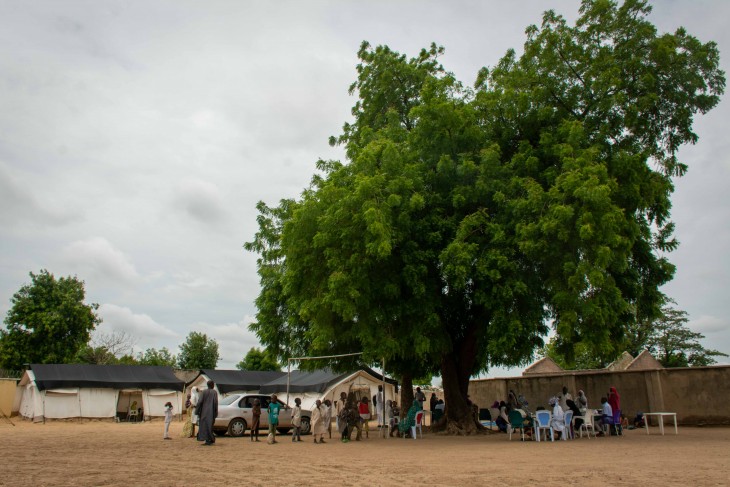 The influx of people placed even greater strain on the city's health infrastructure, making facilities like this one vital.

Zainab Kaigama, a doctor with the Ministry of Health, sits behind a table under the tree calling up patients one-by-one.

"The diseases we see most often are common colds, malaria, skin infections and general respiratory infections, we also do immunisations," she said.

"Most of the people we see, whether they've been displaced or from the local community, have never been to the hospital because of the distance. It's much easier for them to come here."

The ICRC will soon start building a permanent primary health care centre on the same site, in lieu of the abandoned structure.

The new facility, which will offer improved patient care and privacy, is due for completion in early 2020.

Whether people still use the shade cast by the Neem tree as a waiting room, remains to be seen.