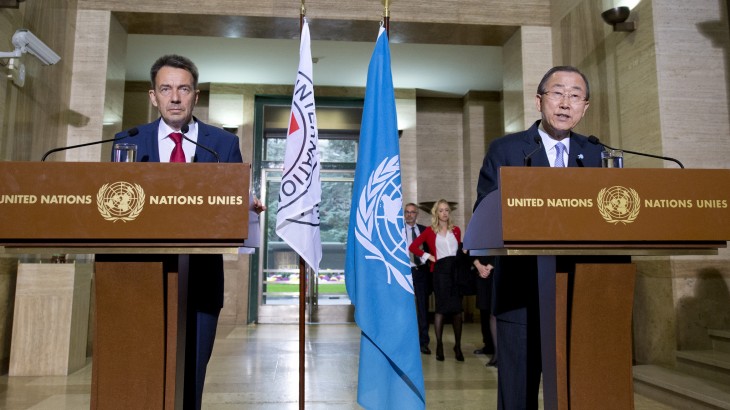 (Geneva, 31 October 2015) The Secretary-General of the United Nations, Ban Ki-moon, and the President of the International Committee of the Red Cross (ICRC), Peter Maurer, have issued an unprecedented joint warning about the impact of today's conflicts on civilians and appealed for urgent and concrete action to address human suffering and insecurity.

The two leaders stressed the importance of respect for international humanitarian law in order to stem the chaos and prevent further instability.

They called on States to take the following urgent actions:

"Rarely before have we witnessed so many people on the move, so much instability, so much suffering," said Mr Maurer. "In armed conflicts in Afghanistan, Iraq, Nigeria, South Sudan, Syria, Yemen, and elsewhere, combatants are defying humanity's most fundamental norms. Every day, we hear of civilians being killed and wounded in violation of the basic rules of international humanitarian law, and with total impunity. Instability is spreading. Suffering is growing. No country can remain untouched."

Some sixty million people around the world have been displaced from their homes because of conflict and violence – the highest figure since the Second World War. Conflicts have become more protracted, meaning that many displaced people face years away from their homes, communities and livelihoods.

"In the face of blatant inhumanity, the world has responded with disturbing paralysis," said the Secretary-General. "This flouts the very raison d'être of the United Nations. The world must reaffirm its humanity and uphold its commitments under international humanitarian law. Today we speak with one voice to urge all States to take immediate, concrete steps to ease the plight of civilians."

The two leaders stressed that the UN and the ICRC occupy a unique position in bearing witness to the consequences of conflict. The principle of humanity is at the heart of both the UN Charter and the ICRC's mandate and mission.

Both the 32nd International Conference of the Red Cross and Red Crescent in December 2015 and the World Humanitarian Summit in May 2016 will focus on the urgency of taking concrete measures to protect civilians in conflict.