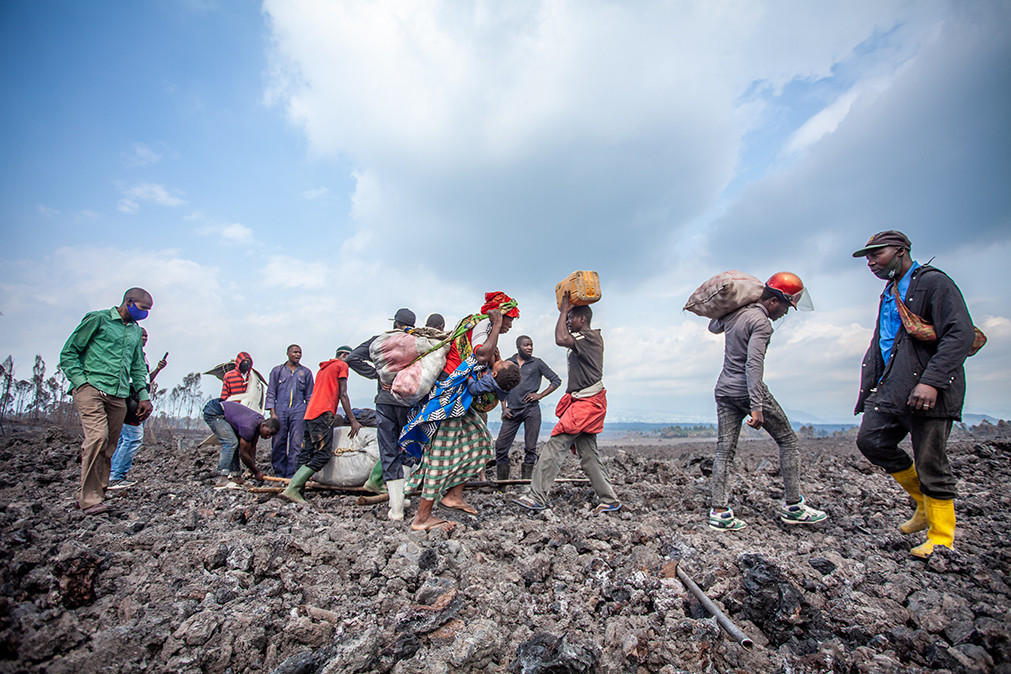 On Monday 7 June, two weeks after the eruption of Mount Nyiragongo, the Congolese authorities announced a plan for the “phased return” of Goma residents who had fled the city. Prime Minister Sama Lukonde said that, in the first phase, people whose homes were still habitable could go back to them but urged those who had suffered damage to their homes to wait for the contingency plan put in place by the Congolese Government to come into operation. According to several sources, there is increased movement at lake ports as the return gets under way and people who left Goma to take refuge in Bukavu start going back.
Article 11 June 2021 Democratic Republic of the Congo

The city of Sake, situated 30 km from Goma, is also seeing people on the move, and the provincial authorities laid on several buses for the first phase of the return operation. Although the government has issued assurances that the danger has passed, volcano experts have not, at this point, ruled out the possibility of another eruption on land or under the lake. They recommend that people remain vigilant and keep well away from the path of lava flows.

On the ground, the challenges are enormous. This crisis has exacerbated existing humanitarian needs arising from the armed conflict and violence and other recent emergencies caused by COVID-19 and Ebola virus disease. The United Nations estimates that the amount required to respond to current needs is around USD 20 million.

Since Saturday 29 May, there have been streams of people travelling between displacement sites and Goma. Poor conditions and the fear of armed raids have precipitated the return, and there are now considerable numbers of people on the move on the Minova-Sake-Goma route. Several families reported that homes in the city's "red zone" had been broken into on the night of Tuesday 1 June by people brandishing knives.

We have no food and practically no water. Since we arrived here, most of us have been sleeping on the floor in churches or schools, sometimes in windowless rooms. We are short of everything, and our children are starting to get sick," explains a displaced woman in Sake.

Epidemics are another cause for concern. Several humanitarian organizations, including Doctors Without Borders (MSF), have reported several cases of cholera in Sake. According to the United Nations, at present, there are internally displaced people at more than ten different locations in the country, including Bukavu, Idjwi, Kalehe–Minova, Kabare, Masisi–Sake, Rutshuru, Nyiragongo, Lubero, Goma and Butembo, and some people have also crossed the border into Rwanda. There are around 200,000 people who have not yet been able to return to Goma.

The ICRC teams, in close cooperation with the Red Cross Society of the Democratic Republic of the Congo, have already started operations to respond to the most pressing needs of displaced people and those who have returned to Goma. This includes providing water and health care and reuniting separated families. They are also now planning the second phase of the response, which will focus on shelter and the distribution of essential items.

Most displaced people are staying with host families, while others are camping out in overcrowded churches and schools. Ensuring access to clean water is crucial, and the current shortage poses a serious risk of disease outbreaks both in Goma and at displacement sites. Goma's water supply system was severely affected by the lava flow, which put a reservoir supplying water to over half a million residents out of service. It also destroyed the main transmission lines that power drinking water treatment plants. 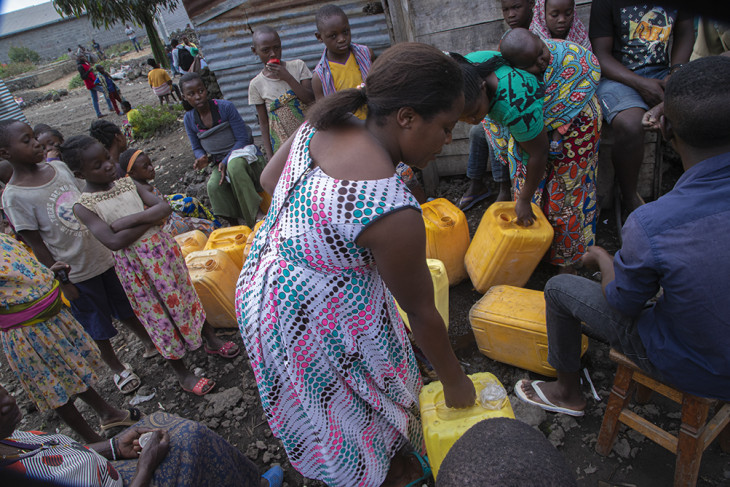 : Since the volcano erupted, Anne has had to buy drinking water at a standpipe, paying double the normal price. ICRC

Almost half of Goma's residents now have no drinking water, and there's a high risk of outbreaks of waterborne diseases, such as cholera," warns Rachel Bernard, head of the ICRC's regional delegation in the Democratic Republic of the Congo (DRC).

The day after the eruption, the ICRC teams snapped into action to restore the power supply to drinking water plants and arrange alternative water supplies in the north-eastern part of the city, the most seriously affected area. Over 59,000 residents in the Munigi district already have access to free water trucked in from a reservoir urgently repaired and put back into service by the ICRC.

"After the eruption, women were having to trek 6 to 10 km a day to fetch drinking water sometimes costing more than CDF 1,000 for a 20-litre jerrycan, which is six times the normal price. Mothers were saying that they weren't able to ensure proper hygiene for their children," reports Rasha Abu El Hassan, coordinator of the ICRC's water and habitat programme. Water was also trucked in daily to Goma's prison, hospitals and a centre for people with impaired mobility. A number of water tanks have also been installed, supplied by tanker, on main roads in Sake and Minova, where there are thousands of people displaced by the crisis.

Hospitals and primary health-care centres are also in need of urgent support to enable them to continue delivering care. With the massive evacuation of people from red zone neighbourhoods, the health-care facilities in the west of the city have had to cope with hundreds of extra patients, which has affected their ability to provide safe and timely care. Secondary health centres and the Bethesda hospital in Ndosho are receiving support from the ICRC to maintain the supply of electricity, water and medicines. At the hospital in Ndosho, the ICRC has also set up overflow tents to cope with the influx of new patients and to continue treating wounded people from all over North Kivu.

The search for separated family members gets under way

Since 23 May, the DRC Red Cross, with the support of the ICRC, has registered 132 unaccompanied children, arranged for 67 children to be reunited with their families and collected 1,165 tracing requests from parents looking for their children. Operations to register unaccompanied children and reunite them with their families are being carried out in Goma and at displacement sites. In Rwanda, where around 1,500 refugees have been registered, over 120 children have already been found and registered by the Rwandan Red Cross, with support from the ICRC. 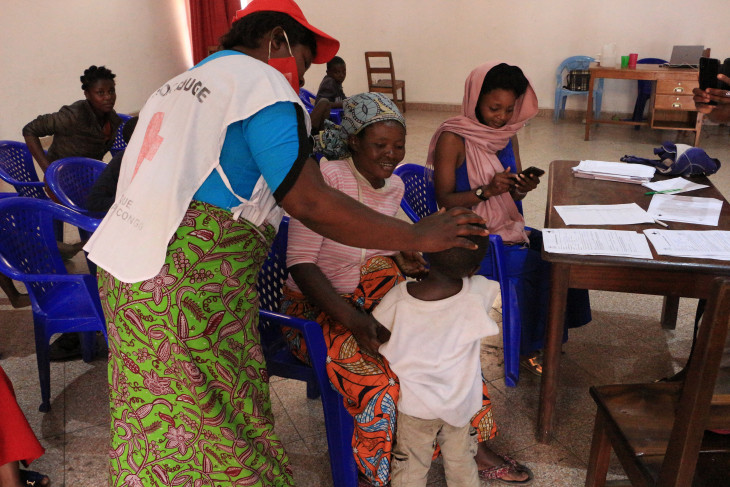 The response to the volcano crisis must continue; it is a crisis on top of a crisis.

Thousands of displaced people, especially those whose homes were directly affected by the lava flow, need shelter, food, hygiene items and other essentials. The impact of the eruption on the fertile farmland in the north-east of Goma, an important source of food supplies for the city, and soaring food prices risk leaving people without enough to eat. It is crucial for both the authorities and humanitarian organizations to deliver an effective and comprehensive response to this crisis, which affects many people who were already vulnerable.

The situation in North Kivu province remains very complicated; the socio-economic challenges and armed conflicts that have plagued the area for decades have already uprooted over 2 million people from the province, almost a quarter of them in 2021 alone. It is one of the areas most exposed to food insecurity in the whole of Africa, and each disaster chips away at the resilience of the people living there.

The ICRC has been working non-stop since the eruption, with its teams responding to pressing humanitarian needs caused by the lava flows and the subsequent displacement of people within Goma and to Sake and Minova. It also continued activities throughout the province to help people affected by armed conflict and violence. The ICRC office, located in the red zone, was moved to the west of the city, while its teams work all over the city. The ICRC is working in close cooperation with the DRC Red Cross in many areas of activity and coordinating closely with the International Federation of Red Cross and Red Crescent Societies (IFRC), including on this response.

Cooperation within the International Red Cross and Red Crescent Movement 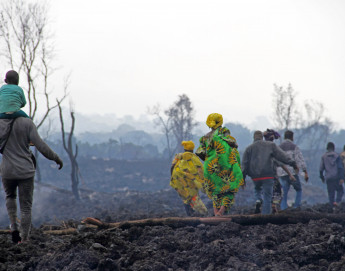 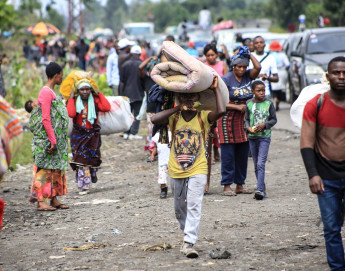